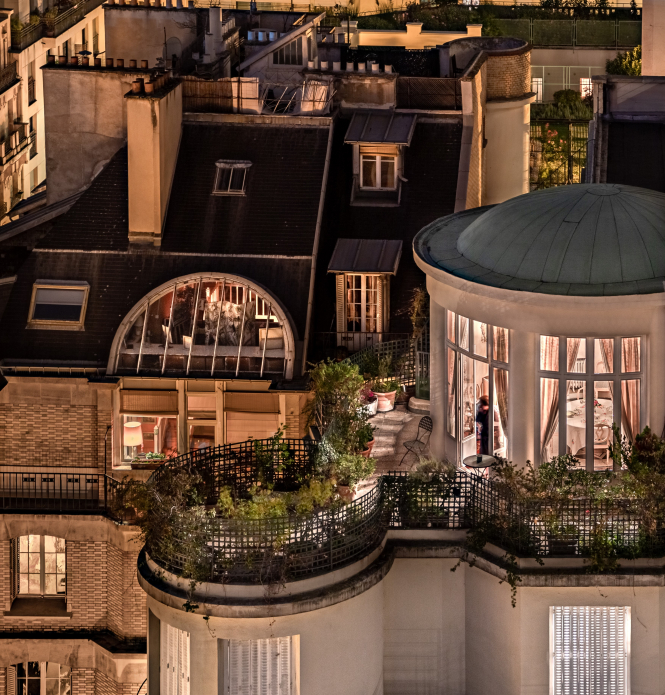 Raphaël Metivet's Paris photographs of people taken through windows are loved by the people in them, with the city's residents often wanting a copy for themselves
By Samantha David

Incredibly, Raphaël Metivet only started taking photos of Paris a couple of years ago. “I had always taken photos with an iPhone but then I started using a Canon Reflex and I taught myself from YouTube tutorials and by going to photography exhibitions.”

And now suddenly, and for good reason, his photos are being featured in French Vogue.

At the beginning, he took pictures of classic Parisian architecture as he walked around Paris and shared them on social media, but then he had the idea of taking rooftop shots. “I went up to the terrace at the top of Galleries Lafayette, which is open to the public and took some photos there. This worked so well that I went to the Tour Saint-Jacques, which is also open to the public, and met some other photographers who also take photos of roofscapes.”

The loosely knit group collaborate to find new vantage points from which to photograph Paris. Sometimes they can get permission, but very often it is just a case of finding access to a roof and not asking too many questions. “We’re not going onto roofs for adrenaline; we’re careful, and don’t damage anything. We just want the views.”

When we caught up with him, French Vogue had just published an article about his photos on Instagram and his phone was ringing off the hook. “Things are moving quite fast. I have added 29,000 followers in the past month and I’m getting about 4,000 more every day,” he says, sounding thrilled but slightly dazed.

His photographs of people taken through windows are beautiful and poetic, and people love being in them. “It’s very rare that someone doesn’t want to be photographed. We’re really easy to spot. People see us, two of three photographers on a roof somewhere, and they write their phone numbers really big on a piece of paper and hold them up so we can zoom in and phone them, and they almost always ask us to take photos of them.

“They think it’s cute and fun and often ask for copies. Obviously if someone doesn’t want to be photographed, we don’t. But it’s very rare.”

His images of Parisian life as seen through windows show another, very poetic, side to Paris – far from the tourist trail. Frequently taken at dusk in the ‘golden hour’, his pictures often show stunning Haussmann buildings silhouetted against dramatic golden or deep blue skies, the windows illuminated with golden light from within, and their inhabitants going about their daily lives; cooking, reading the newspaper, sitting on a balcony.

Born in Paris, Raphaël Metivet is half-Dutch on his mother’s side and has travelled extensively. “We spent 12 years in Martinique, and I do miss it. Especially now, locked down in a Parisian winter.” He has also lived in Australia. As well as taking photos for hotels and restaurants he manages an online boutique. “I also upload photos of exhibitions and events around Paris, things that interest me and that might interest visitors.”

“I don’t really know what the future holds. It’s hard to know at the moment. I love taking photos from rooftops so don’t plan to stop doing it, but whether it will become a full-time job is another question.

“It’s hard work, and making money out of photography is increasingly difficult. But everyone does more than one job these days.”