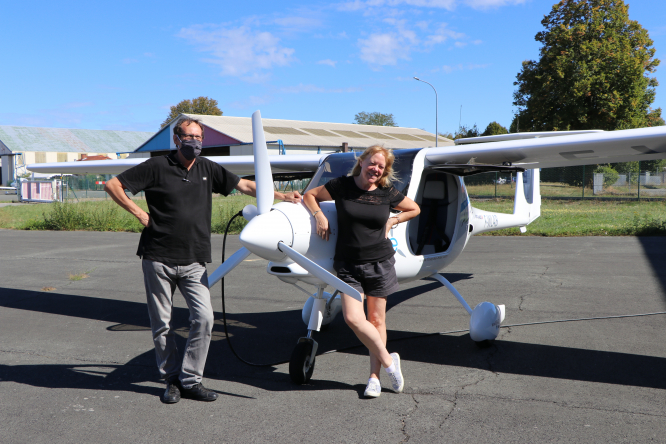 No engine? No power? No revs? Instead quiet and calm as Samantha David flies electric plane The Pipistrel Velis
By Samantha David

When I told a pilot friend that I’d been off flying an electric plane, she pulled a face. What, no engine? No power? No revs? No excitement?

Another aviation-mad pal was fascinated about the technological challenge but dismissive about the practicalities. All very pretty – but what about the autonomy?

Let’s start with that massive elephant in the hangar right away: Pipistrel’s Alpha Electro will not go far because the battery only lasts for 45 to 50 minutes before it needs recharging.

It can be recharged in about an hour, but periodically needs a long, slower recharge. So you can forget any ideas of setting off round the world in it, or even making a break for the border.

I, however, am what instructors euphemistically call a “young pilot”. I have a microlight licence and around 120 hours (in 3-axis, which are like planes) plus another 40-odd hours in light aircraft as I train for my PPL – and I confess I had plenty of fun flying the Alpha Electro.

I was invited by the FFA (Fédération Française Aéronautique) to visit its FabLab in Toussus-le-Noble, near Versailles, where they have been testing the prototype Alpha Electro for the past 18 months.

The plane I flew is a prototype. The Pipistrel Velis, which is based on the model sells for about €160,000 – pretty much a standard price for this type of aircraft.

It was a perfect afternoon for flying: warm, not much wind, great visibility.

I climbed into the plane with instructor Jacques Carriquiriberry, who is also coordinator of the FabLab.

The first thing I noticed was the pre-flight routine. There was no need to check fuel and oil levels, no need to pull the aircraft halfway across the airfield to the fuel pumps. In we got, and having been through a very brief checklist, we started the motor.

Instead of a deafening roar, there was just a faint noise like a moth batting its wings against a paper lampshade, and no smell of hot oil and aviation fuel.

Taxiing towards the runway, it was strange that whenever you cut the engine, it just stopped completely. It felt like driving a hairdryer – but no engine checks to complete before lining up for takeoff either.

Compared to a normal flying school plane, such as a DR400, the Alpha Electro feels small and light, and the controls are simplified. “Don’t bother with rpm,” said Jacques. “Just go with the percentage of power available. “

What, no electrical fuel pump? “Nope. No mixture, no carb heat, no changing from one fuel tank to the other, either.”
So I just pushed the lever all the way forwards and off we went. When you do that in a DR400, there’s a pause as the engine thinks about what you want before it roars into action. In the Alpha Electro, you rattle off down the runway at full power immediately.

Once airborne, I had no clue what I was expecting, but the main thing I noticed was the quiet, and with the quiet came calm. It’s very easy to listen to the radio (controllers and other pilots) and to the intercom (the other people in your plane).

Obviously, the basic skills of flying, controlling speed, direction and altitude, remain the same in all aircraft so there were no surprises there.

There is a reason the plane is named after a bat. The company that designed and built the prototype is Slovenian and because of restrictions imposed by the old Yugoslavian government in the 1980s, it used to test-fly its aircraft secretly, between dusk and dark like bats and hence the name.

But I digress... I left us climbing happily out of the aerodrome just as we would in any other aircraft.

Turning the first corner, flying the Alpha Electro was so simple that I even had time to look at the scenery and admire a little chateau nestling in the woods. Even without revs to count, there was plenty of power and the simplicity of the dashboard made the plane immediately huge fun.

As a non-expert, I didn’t notice any lack of power or performance. In fact, I liked the readiness of the motor to pick up where it left off. If you reduce power completely, the engine turns off and the prop only revolves because you’re still moving forwards, but the minute you slide the lever forwards the engine is there again.

Silent and clean: the perfect plane to learn to land

Student pilots all spend many hours learning to land a plane, taking off from the runway, flying round to the other end and landing again.

In a busy flying school, once one student finishes practising, another will get in the same plane and start doing the same thing. Even professional pilots practise landings from time to time, and a good thing too, because it is not an easy skill.

Residents, understandably, do not like the noise or the pollution and in Toussus-le-Noble, an upmarket residential suburb of Paris, there are silent periods at the weekends when all flights are banned.

All flights except the wee Italian bat, which does not bother anyone because it is silent and clean.

I can imagine how pleased people would be if all student pilots flew electric planes when learning to land. Students typically get a 15-20-minute briefing before a flying lesson (of around 40 minutes) and again afterwards, plus there is paperwork to complete after every flight so it’s easy to imagine an Alpha Electro being used by a flying school. A further advantage is the economy and simplicity of servicing and maintenance.

Landing the plane did not seem any different from landing any other plane, and taxiing back to the hangar was just that same quiet, calm experience it had been on the way out.

The plane did not weigh less on landing – as non electric plans do after a flight (fuel weighs 0.7kg per litre) – making it potentially more stable in a cross wind landing.

Time to charge up

We had used about €2.50-worth of electricity. Aviation fuel costs around €1.75 per litre and, on average, a two-seater plane would use around 15 litres in 45 minutes.

The big difference was that in the 40 minutes we spent flying about, we had used 70% of the available power in the batteries, meaning we had to wait for it to recharge before going up again.

Seeing as how flying it is such fun, that really is a big downside.

Flying taxis to be tested in Paris in 2021