Where to visit in laid-back La Rochelle 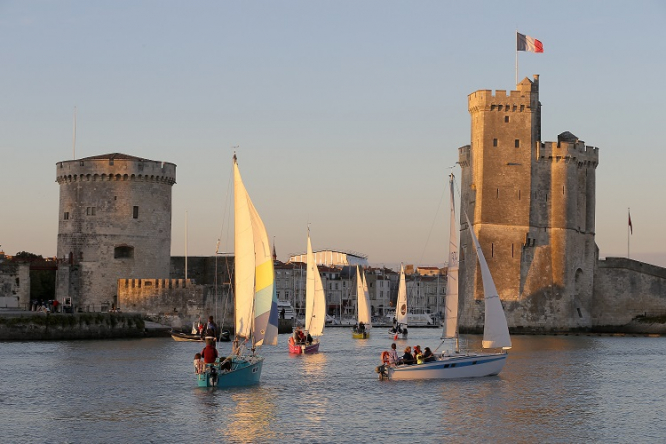 La Rochelle, with its population of around 78,000, including more than 15,000 students, is a vibrant city, and one that is worth exploring.

More relaxed than its coastal neighbour Bordeaux, it is the kind of place where, on warm evenings, stylish young things crowd into cafés clustered round the pedestrianised and cobbled Vieux Port.

Many speed straight through the city heading for the Ile de Ré, but this is a mistake.

The Ile de Ré is unquestionably chic (and breathtakingly expensive) but it does not have the chilled vibe of La Rochelle, the same cultural diversity, for choice of bars and restaurants.

This year, the re-opening of the Mairie de La Rochelle (see opposite) is yet another reason to head to the “White City” – which acquired its nickname in the Middle Ages from British visitors impressed by the pale stone architecture.

The old port is the beating heart of the city and the place visitors should get to know first.

Walk along the cobblestoned quaysides, under the shade of the trees and check out the cafés before strolling underneath the arch of the clock tower into the pedestrianised old town.

The covered market is a foodies’ delight, and the best place for sampling local oysters. They are cheaper here – and because many of the stall holders have farmed the oysters themselves, they are sublimely fresh. Wash them down with a glass of white wine.

Also look out for bottles of Pineau des Charentes, a fortified wine made from fresh grape juice and Cognac eau-de-vie.

The farmers’ market is on Friday. If that gives you an appetite, check out the cafés and bars around the market, as they are less expensive and more authentic than the establishments on the Vieux Port.

The streets around the old town are home to plenty of indie boutiques which are perfect for window-shopping.

Not far from the market, Le Bunker museum is a must for Das Boot fans. It is housed in a real underground bunker built by the Nazis in 1941 to house around 60 U-boat officers.

It had two massive dormitories and six individual rooms, as well as a large, well-stocked bar, sanitary facilities, and offices.

After the war it was preserved and the displays now detail the occupation of La Rochelle, and the construction of the submarine base in the port (which is also still there).

The museum is quite small, only on one level, and is mainly curated in French, but you can borrow a large folder at the entrance which explains everything in English.

It takes about an hour if you read everything, and the topics of resistance, collaboration and deportation are covered too. There are waxworks, newsreels (with English subtitles) and a mass of artefacts which bring the history to life.

The Vieux Port is also home to a solid handful of tourist attractions, chief among them the towers guarding either side of the harbour mouth.

There are actually three of them, and they are worth exploring in order to get a sense of the city’s history, and also for the views from the top.

Before buying tickets, read the information (in English as well as French) on the boards outside the Tour Saint-Nicolas.

The three towers can be explored with a single ticket, and the views from the top out across the port are reward for climbing the steep and narrow circular stone stairs.

While you are at the port, do not miss the Musée Maritime de La Rochelle. To get there from the towers, you have to walk past the tourist office, which is convenient, because then you can pop in and collect a map.

The Musée Maritime has a section on the dockside which explains about the history of La Rochelle and particularly the fishing industry (in French), and also has three vessels – a tug, a fishing trawler, and a weather ship called France 1 – which is the bit you should not miss if you do not have time to see everything.

You can wander round the entire ship (see photo above), learning not just about modern meteorological observation but about the history of it. There are all kinds of machines, log books and waxworks which bring it all to life; the cabins, sick bay, and the big mess hall give a real sense of what life onboard was like.

Do not miss the bar/restaurant on the top deck. It’s a great spot to relax and get some refreshments; we really enjoyed our leisurely lunch there, and if you go back in the evening you will find a different vibe with a laid-back crowd enjoying mojitos and wine as the sun goes down.

Also on the port is the city’s impressive aquarium, which is a firm favourite on rainy days. It has displays on several levels, making you feel almost as if you have stepped into another world or at least a series of different worlds.

Children love the submarine in the entrance hall – in fact they love the whole place. Once in the dimly lit interior, you can sit and watch the fish – the jelly fish ballet is a personal favourite.

The tanks represent the world’s oceans, and there are stingrays and sharks, but if you do not speak French, get the English audio guide in order to understand everything.

The café is a great place to rest your legs.

In the summer months, the museum is open in the evenings too (when it is much less crowded) and if you buy tickets online for an entrance time later than 18h, you get €2 off each one, a discount that quickly mounts up if you have a large family.

Getting around La Rochelle is easy on foot but there is also a good public transport network, Yélo, including the electrically-powered passeur, a ferry running from beside the Tour de la Chaîne to the Médiathèque Michel Crépeau (handy for the aquarium, the maritime museum and the tourist office if you do not want to walk round the port, and the tickets bought on board cost just €1).

From the same place, you can also get a water boat round to the Port Des Minimes, from where it is a two-minute stroll to the small but sandy Plage des Minimes (see photo below).

It is not the most fabulous beach in France but it is very popular, and has free parking, showers and toilets as well as a good selection of beach bars, making it a great place to unwind after some serious sight-seeing.

You can even stroll up and down the prom admiring the yachts before indulging in an apéro.

Another great place to relax and get out of the sun is the Parc Charruyer, just a short walk round the ramparts from the Tour de la Chaîne past La Tour de la Lanterne.

A very pretty strip of greenery running through the city centre, it is a great place for a picnic, and has cycle paths, water features, shady seating, cafés, play areas and an animal corner where children can see spectacular white peacocks, goats, ponies and donkeys.

A millennium of life, religion and rebellion

La Rochelle was founded in the 10th century and became a free commune, in charge of its own affairs.

By the 12th century the town was minting its own coins, and businesses were not paying taxes to the crown.

Middle class importers and traders prospered, and when Eleanor of Aquitaine married Henry II, the city came under Plantagenet rule until it was recaptured by the French in the 1224 Siege of La Rochelle.

During the Hundred Years’ War, La Rochelle once again came under English rule, but the city expelled the English in 1372, when a naval battle freed the city and brought the English Channel under French control. The city maintained a certain autonomy, becoming the largest French harbour on the Atlantic coast, dealing in wine, salt and cheese.

During the Renaissance, the then mostly Catholic population started to convert to Protestantism, and despite two ‘heretics’ being burned at the stake, the conversions continued.

It was partly driven by a desire for political independence and partly by popular opposition to being taxed by the crown.

By the 1550s there was a strong Huguenot presence in La Rochelle and by the 1560s the tension had translated into outbreaks of violence, and in 1562 a mob murdered 13 Catholic priests in the Lantern Tower.

By 1568 the Huguenots of La Rochelle had declared the city an independent republic, a state within a state, with predictable results. In 1571, the city was blockaded by the French navy and was besieged from 1572-3.

The religious crackdown ended with Protestant worship confined to only three cities in France: La Rochelle, Nîmes and Montauban.

La Rochelle remained rebellious, disinclined to submit to the King’s authority, and by the time Louis XIII came to the throne, his royal command was that La Rochelle would be brought to heel.

The English came to the support of the city, but it was besieged for 14 months from 1627 and finally stripped of its privileges.

The Huguenots were persecuted and increasing numbers of them expelled from the city. After Louis XVI came to the throne, many of them emigrated to the New World founding cities like New Rochelle, just north of New York.

The city remained Protestant, however, and prospered from trading sugar, slaves and fur with the New World.

Come the French Revolution, though, the city had started to decline as France lost territories in the New World, lost its maritime dominance, and the slave trade was abolished.

The last slave ship from La Rochelle, the Saint-Jacques, was captured in 1793 and slavery was abolished in France in 1794.

In the 19th century the first mechanically-powered submarine in the world was built in La Rochelle and in the war after France was invaded, the Nazis established a submarine base in the port.

It was the last city in France to be liberated, and the submarine base has become iconic, used as a location for the filming of Das Boot, Raiders of the Lost Ark and featuring in the computer game Commandos 2: Men of Courage.