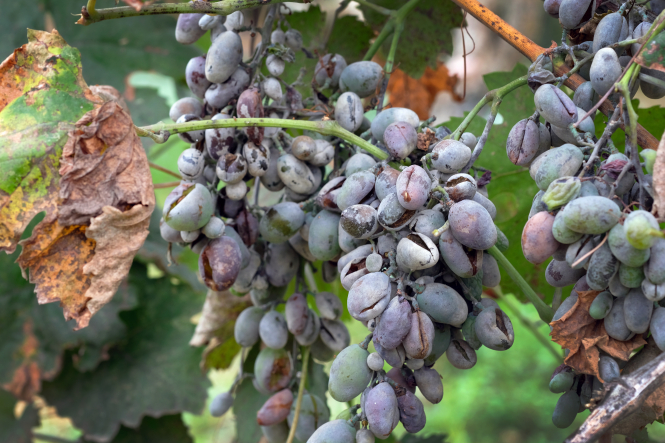 France’s champagne vines have been hit hard by the vigorous fungal disease mildew and are only expected to harvest half of their crops due to unexpected weather in the past few months.

There is unlikely to be a shortage of bottles of bubbly though as most champagne houses have large stocks from last year when the Covid crisis saw demand fall. This will now be put on the market to compensate for this year’s expected small harvest.

Mildew is a fungal disease which splits open grapes and stops them developing and also attacks grape vine leaves.

“This year has seen a mildew attack which is exceptional, and some even say unprecedented in recent history,” Arnaud Descotes, the technical and sustainable environment director at the Comité Interprofessionnel du vin de Champagne, told The Connexion.

“Our grape growers are out there every day fighting against it.”

The main method of attacking mildew is to spray fungicides, and Mr Descotes said almost all champagne growers were using traditional, copper based ones.

“They have the disadvantage of being washed off after each rain, but are very efficient, where the mildew quickly adapts to some of the more modern synthetic fungicides, which resist the rain.”

Estimates are that the worst hit regions will lose between 20% and 25% of their expected yield, although Mr Descotes said that if there is a dry and sunny August and September losses might not be so heavy.

“There is a large variety between one region and the other, depending on where the rain fell, the wettest regions are the worst hit,” he said.

Hardest hit regions include the Marne valley and some sectors of the Aube valley, where the high humidity has been coupled with hot conditions – perfect for the fungus to flourish.

By the second half of July, the region, usually one of the driest in France, had 300ml of rain.

Likely losses due to mildew add to what was already a difficult year for many grape growers in the region, who were also hit by late frosts in the Spring which affected around 30% of the area.

In some places growers have been hit by both frost and mildew.

“They are facing a complicated year,” said Mr Descotes.

The last large mildew outbreak in champagne was in 2012, but there was a smaller one in 2016.

This year the trade body, which unites growers, champagne houses, and traders, set limits of 10,000kg of grapes per hectare, a limit which many growers are unlikely to reach.

They were allowed last year though to build up reserves equivalent to 7,600kg a hectare, which should help see them through the crisis.

It is too early to say what the quality of the 2021 harvest will be but it is unlikely to be affected by the mildew attacks, which hit quantity rather than quality.

In 2016, the quality of the vintage was exceptional, in spite of the mildew that year.

WHO recommends lifting of international Covid travel bans
23 January 2022
More from Food and Drink
More from Connexion
Get news, views and information from France
Join the newsletter
Subscribe to The Connexion