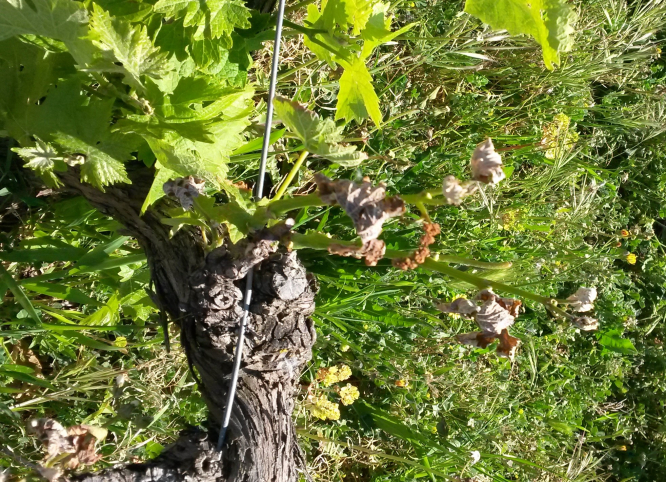 This April, many vineyards in France were damaged by frost. Vignerons have reported losses of 60-100% in the worst-hit spots.

There are two types of frost. Radiation frost is the most common and occurs on clear nights with no wind causing a temperature inversion. The temperature at ground level can drop overnight to around -3 to -5°C even if the air several metres above feels warm. This kind of frost mainly affects plains, the base of slopes and areas next to hedges or in basins where cold air accumulates as it flows downwards. Vineyards are generally not planted in those locations if spring frosts are likely in that region and it is unwise to plant hedgerows or windbreaks just downhill from a vineyard.

The second type is called advection frost, or freeze, and is caused, like the one this year, by a large movement of cold air from the arctic affecting a whole region or several regions with both cold days and nights. Fortunately this type is rarer but attacks vineyards no matter what their aspect, causing much more widespread damage.

The vine itself is not harmed by frost, it can survive temperatures as low as -20°C. Frost only causes damage if it occurs after the buds have burst and the shoots have just started to grow, which happens in late March and early April in France.

If the air temperature drops below -2°C for more than 30 minutes, the sap inside the fragile young shoots and leaves can freeze, which bursts the plant’s cells and makes the shoot look like it’s been burned. Once that has happened, the shoot will die. Grape bunches only grow on new shoots, so if the shoot dies, so does the bunch it carried.

Shoots grow from the buds on last year’s canes. Each bud contains a secondary shoot which will normally only grow if the first shoot fails within a week or so of budburst. So a vine that has been attacked by an early frost may still produce shoots with grape bunches on them. However, these secondary shoots do not always have bunches and they will not achieve the same level of ripeness because they started to grow later.

Therefore frost can result in a combination of crop-loss, unripe bunches and high variation in ripeness levels of the bunches at harvest time, depending on the region, grape variety and when the frost occurred.

Furthermore, the presence of dead shoots increases the risk of fungal and bacterial infection to the vine and therefore that dead matter should be cut away as soon as possible.

Because of these risks, vignerons have developed many methods and techniques to avoid or reduce the problems, especially in regions prone to spring frost. The first is to plant grape varieties that are more cold-resistant, such as Riesling and Pinot noir, or which will begin their growth cycle after the risk of frost has disappeared from the region.

The second is to choose sites that are unlikely to be attacked by frost. That is why, especially in northern regions, vines are planted on south-facing hillsides. They gain the advantage of the early morning sun and the freezing air from a radiation frost will flow downhill and out of the vineyard. Lakes and rivers also help in acting as a heat-sink drawing cold air away from the surrounding vineyards.

Vignerons may also delay pruning, thereby delaying budburst, if they think frost is likely at the time their vines would normally be most fragile. They may also use a technique called double- pruning, whereby the cane or spurs are left longer than required. The buds at the end of the cane and spurs will burst first, delaying the others until after the risk of frost, at which point the vines are pruned again. This is labour-intensive and can delay ripening of the fruit.

The presence of weeds in a vineyard increases the risk of frost damaging the vine’s shoots because of the evaporation of dew from tall weeds and preventing cold air flowing downhill and out of the vineyard. The temperature at 40cm above the soil is generally two degrees lower than at the surface.

Training vines close to the ground, provided that it is weed-free, is a method used in Chablis and Champagne to help avoid frost. Very sparsely covered or bare soil absorbs more heat during the day and radiates it back at night but a heavily ploughed soil decreases the temperature by several degrees, because of increased evaporation.

If frost is forecast, there are measures that can be taken. The traditional method is to light frost-pots or “candles” between the rows to raise the temperature and help move the cold air. The sight of thousands of tiny braziers in the vineyards of the Loire and Chablis is quite magical, even if it is a sign of underlying fear for the vignerons.

To reduce the impact of a radiation frost. two newer methods have been employed. The first is to use sprinklers to wet the growing buds. It may seem counter- productive but as water freezes, it gives off fusion heat and the layer of ice will keep the temperature of the young shoot at zero degrees, which is not low enough to freeze the sap. However, it only works if the shoots are very small and the sprinklers are kept on until the air temperature has risen enough to melt the ice-coating.

The second method is to move the freezing air away from the vineyard by use of wind turbines or helicopters.

Neither of these methods are of any use in a freeze and sprinklers would cause even more damage.

There are certain sprays that are said to help with frost-protection, although scientific evidence for their efficacy is slim. Oils such as soybean oil and mineral oils have been shown to delay budburst by several days so could help as a preventative measure. Ice-nucleation deficient bacteria are believed to provoke ice crystallisation at about 5 degrees higher than normal, although their effectiveness is questionable. Cryoprotectant agro-chemical sprays, which protect the plant from frost damage either by providing a physical barrier, lowering the freezing point of the plant’s cytoplasm or providing the plant cells with enhanced protection from damage, have had inconsistent results. A foliar fertilizer combining potassium carbonate and seaweed-extract is said by some to help vines resist and recover from frost-damage.

Frost remains a serious recurring problem for vignerons. Frost insurance is expensive and only covers the money already spent pruning and working the vineyard that year, not the potential value of the wine that could be lost.

That is why growers have gone to great lengths to choose appropriate sites, grow the right grape varieties, prune their vines in a particular way and if all else fails, employ extreme measures to save their crop and produce ripe, evenly-balanced fruit.