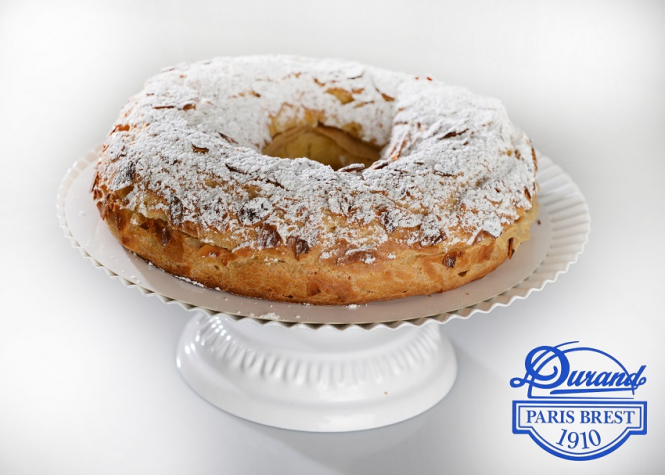 The creation of some of France’s best-known sweet delicacies were happy accidents rather than the result of either necessity (‘the mother of invention’), precise culinary intent or forethought: tarte Tatin, as noted earlier in this series, came about par hasard – in a Loir-et-Cher hotel – as did the boozy crêpes Suzette, orange-infused pancakes reputedly invented by mischance at Monte Carlo’s swanky Café de Paris.

However, one afternoon teatime treat (or goûter, as it’s called in France) came about with very specific reason.

The Paris-Brest is a sumptuous circle of choux pastry filled to oozing point with crème pralinée (praline mousseline cream) and topped with crunchy, flaked almonds.

It was pastry chef Louis Durand who, at the request of the creator of the Paris-Brest cycle race, journalist Pierre Giffard, concocted the round entremet to ape the shape of a bicycle wheel. It was an early form of PR, the aim being to bring bicycles, the race itself and Giffard’s Le Petit Journal newspaper to a wider audience.

That was in 1910 and the Durand family has closely guarded the original recipe ever since, though as no patent was ever registered, they cannot claim sole rights to its creation and sale.

You can, however, still visit Pâtisserie Durand at 9, avenue de Longueil in Paris, where a Paris-Brest cake in a wheel or saddle shape will cost €4.60.

For example, saucisson brand Cochonou has long been a prominent participant in the ‘caravane publicitaire’– it gives away lots of free snacks from a branded 2CV van en route.

Break the mould by making your own beurre

Now you can try your hand at making your own beurre with a fail-safe DIY kit from Radis et Capucine. This €34.90 kit includes a glass jar, beechwood mould for that authentic butter shape, as well as vital ingredients fleur de sel and lactic ferment sachets. Simply add cream (not supplied) and impress your dinner party guests!

The bars, created at Jacques Bockel’s Alsace factory, have a novel shape – 3D reproductions of Hector Guimard’s glazed earthenware tiles that have been Parisian emblems since the Belle Epoque.

The nine recipes to choose from include 98% dark chocolate for connoisseurs and caramel-tinged milk chocolate.