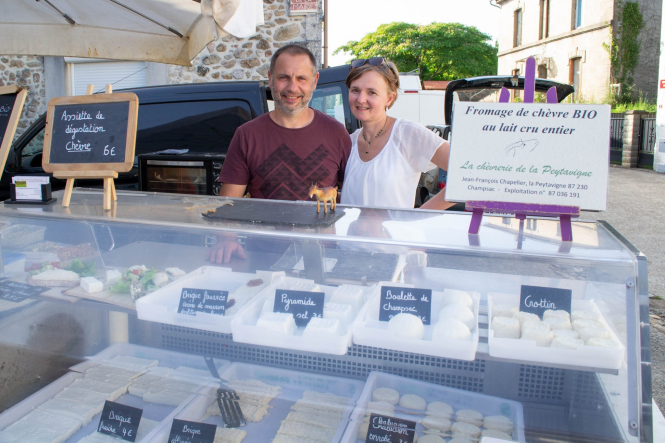 Jean-François and Catherine Chapelier bought ‘La Chèvrerie de la Peytavigne’ in Pageas, near Limoges, three years ago. Originally from Belgium, they were looking for a change from their jobs in nursing and education. “We had goats as a hobby, and our dream was to turn that into a living,” says Jean-François.

They planned everything very thoroughly. Jean-François spent 18 months working on a farm in Belgium and they took a course in cheese-making before buying a small farm in France. They now have around 30 milking goats and approximately 17 acres of pasture along with five acres of woodland.

“It is important to us that the goats can forage in the woods and eat naturally. We’re a certified organic farm, and aim to produce the best quality milk rather than a huge quantity. We won’t use chemical additives in feed to increase milk yield.”

They love their new life but say it’s a tremendous amount of work. “During the summer, what with milking, cheese-making and selling our produce, we never stop.

“We do night markets, get home at midnight and are up at five the next morning, so it’s intense. But we are outdoors all the time, and in the winter we have more time. “We gradually stop milking in November when the goats are pregnant, and don’t start again until March. It’s good for them to have a rest, and it’s good for us too. The winter is a good time for repairing and improving the farm infrastructure.”

In the spring, the young goats are sold. “We leave them with their mothers as long as possible, and we sell the males for pets. Obviously we can’t stop people eating them but we try to sell them to people who will give them a good life first. The females go to smallholders, or people who want organic lawn-movers. We don’t eat much meat ourselves, and what we do eat we buy from organic producers we know.”

Phone ahead (06 66 25 53 75) to arrange to visit the farm and the goats and, of course, the farm’s tiny shop. “As well as our cheese we also sell flour, honey, wine, beer, jam, soap and jars of foie gras and pâté from other local organic producers.”

3 days ago
2
Map: Gastro outbreaks on rise in France - which areas are worst hit?

13 hours ago
3
Covid-19: Rules for travel to and from France

Parisian photographer shows a much darker side of the City of Light
18 October 2021
More from Food and Drink
More from Connexion
Get news, views and information from France
Join the newsletter
Subscribe to The Connexion