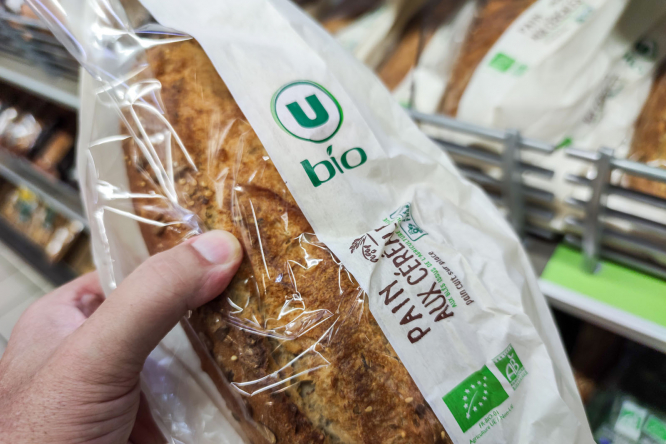 Organic is much more mainstream than it was 10 years ago with 10% of France’s total farm area is now organic Pic: pixinoo / Shutterstock

The organic (bio) sector boomed last year, with people cooking at home due to lockdown, the closure of restaurants and more farm shopping.

Beer and frozen goods were among the fastest-growing areas as more people turned to organic food for everyday items.

However, all is not rosy, with farmers unhappy over France’s decision to cut maintenance aid to existing organic farmers and divert funds to those converting their land to organic.

This involves EU money under the next phase of the Common Agricultural Policy (PAC) funding, from 2023.

President of the FNAB organic farmers’ union Philippe Camburet said countries will now have more power to decide how to allocate aid and France’s plan is “unacceptable”.

He said the farmers provide continuing benefit to the environment, so expect ongoing help, as costs compared to conventional methods are otherwise too high to make it worthwhile.

“The yield is less and we can’t make customers pay in full, as the price would be twice that of non-organic food,” he said.

He said a public consultation is expected in September before the final plan is sent to the EU at the end of the year.

More people are going bio, partly linked to the growing number of organic farms, and many offering direct sales.

With almost 10% of France’s total farm area organic, and 6% of the annual shopping budget, it is much more mainstream than it was 10 years ago.

It still falls short of what those in the organic and green movements would prefer, but France’s total bio land use is around average for the EU, and significantly more than the UK, which was 2.8% last year.

“We import 33% of our organic food but half of that is produce that cannot be grown here,” she said.

“The pandemic was a factor in people changing buying habits in 2020, shopping more locally and more organic.

“The number of organic farms is growing and is now about 50,000, and people are going directly to get products.”

She said this increasing number of organic farms is a better measure of success than the total area of bio farmland.

However, Loïc Madeline, secretary of organic farmers’ federation FNAB, said change was slower than hoped for. “Most farmers are old and it is hard to make a big change, though younger ones are coming in and are more open.

“The number of organic farms is rising but many are small, with 17,000 under 20 hectares.

“However, they are also ‘local’ to more people as a result.

“People do around 55% of their organic shopping in supermarkets but a third is in specialist shops and the rest directly from the farm.” Mr Madeline said a key aim now is to convert larger farms.

“Each hectare that switches to organic protects our water, limits people’s exposure to pesticides, keeps our eco-system healthy and preserves farmers’ health. Europe’s aim is to protect biodiversity and bio helps.”

He said he was very disappointed that France was cutting Common Agricultural Policy aid, saying farmers needed help both during and after the change.

He added: “Money is being paid to prepare the processing industry for organic – but without farmers, there is nothing to work with.”

The CNRS national research body recently produced a study showing how organic agriculture could form the basis of a more “balanced cohabitation between agriculture and the environment” by 2050, though it said some habits would have to change, notably less consumption of animal products.

Sébastien Loctin of Biofuture, which groups several organic firms, is calling for labelling rules to be reversed so there is a ‘chemically-produced’ label on non-organic food and no specific label on organic food as it should be the norm.

France must improve farm pesticide rules for workers and locals

organic food
More from Food and Drink
More from Connexion