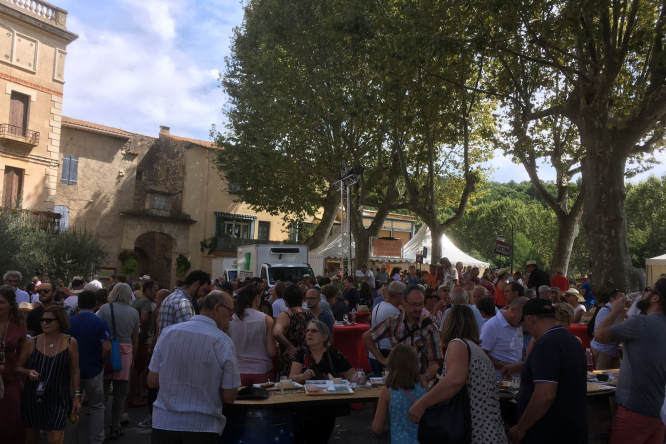 'I believe the success of a fair depends on the relationship between the organiser and the exhibitors' says vigneron and winemaker Jonathan Hesford Pic: Courtesy of Jonathan Hesford

Finally, after about 15 months of Covid restrictions, I was able to go to a wine fair last weekend. It is based in a tiny village in the Roussillon with a dozen wineries, all organic, mostly biodynamic and making Natural wines.

It has been going for over 15 years, attracts an eclectic crowd and is always an enjoyable fair to visit, whether or not you love the wines. However, not all the wineries in the village participated this year, notably the most famous.

A major dilemma when organising any wine fair is how to make it attractive and enjoyable for visitors and equally rewarding for the wineries. There are several models that I have seen in France but it is difficult to say which works best.

The most common system is to sell a commemorative glass that permits the visitor to taste as many wines as they like from all the producers. The producers usually have the wines for sale at their stands or at a central sales point. The advantage of the system is that it is simple to organise, attracts a lot of people, does not place many restrictions and gives the wineries an equal opportunity to promote themselves and sell bottles.

The downside is that if you have famous producers or wines which are considerably more expensive than others, visitors will taste those first and foremost. It can lead to big crowds at those stands and some people wanting multiple glasses of the most expensive wines, while lesser-known producers get ignored or left to the end.

The other problem is that it is down to each producer to limit the intake of visitors and there will always be a certain faction that are there to get drunk.

This format works best for new wineries who want to get their wines tasted and for well-known wineries whose moderately-priced wines are widely available. However, if sales are low and there is a lack of follow-up, the vignerons start to lose interest in the format.

A twist on this format is to make it more of a market than a tasting. An opportunity for visitors to taste and buy wines which they would ordinarily find difficult to find or offered at a better price. They tend to bring in vignerons from other regions to a non-wine area or a city centre. Often organised and promoted by wine clubs, wine magazines and associations, they have more focused advertising, aiming to attract more serious customers. However, they also tend to cost more for the producer and involve a selection process determining who can exhibit.

Another way for vignerons, and organisers, to make a return even if they anticipate low levels of bottle sales is to charge per tasting. The visitor pays an entry fee which includes a number of tokens that can be exchanged for tastings. Visitors can purchase more tokens as required. It is a popular format in the New World and also in non-wine producing countries and regions. Because the visitors are generally spending more money at the event, it allows the organisers to provide better facilities and additional attractions like music or demonstrations.

However, it probably attracts fewer visitors and limits the number of wines or wineries that they will taste. Again, if all the tastings are the same price, people will go for famous and expensive wines, so they do not work as well for lesser- known producers. They can also work out quite costly for the visitor. I have been as a visitor to dozens of wine fairs and participated as an exhibitor at about the same number. It is difficult to say which one works best for both parties.

I have visited local wine fairs where I could taste hundreds of wines for a €10 entry fee. I always try to buy a few bottles because I know that if I do not, that fair will fizzle out after a few years as exhibitors pull out. I have been to fairs where I was able to talk and taste with producers easily and others which were so crowded with inebriated people that they were like a scrum. I have been to other fairs where the exhibitors get more drunk than the visitors!

I have exhibited at fairs which have drawn a huge crowd but which did not have any tangible effect on sales. I have done small local fairs where I have been very pleased with the number of cases that I have sold on the day and had the nice surprise of having visitors turn up at the winery later to become regular customers.

I believe the success of a fair depends on the relationship between the organiser and the exhibitors. If the organiser wants to make too much money from the event, it is unlikely to please anyone. I used to do a wine fair in the UK where the organiser charged the exhibitors a fee for their stands and also charged the visitors a entrance fee. Each year the costs for each went up until visitors were demanding to get their entry fee in free samples and the only exhibitors willing to participate were big companies with supermarket contracts and generous marketing budgets, but boring wines.

Finally there is the problem of whom to advertise the event to, to attract the most suitable visitors. Big, costly fairs will be willing to spend a lot of money on advertising in wine magazines, newspapers and billboards and their ticketing will be professional and available online. Smaller, local events rely on social media, word-of-mouth, the exhibitors themselves and randomly-placed posters which I swear are often put up two days after the event.

I am still not sure what makes a perfect wine fair but I am always keen to hear about them as a visitor and have missed them greatly during the pandemic. Sometimes it feels as though they are secret, exclusive events that we only hear about afterwards.

If you want to discover local wines that are not in the supermarkets or get the opportunity to taste and buy wines direct from producers from outside your region, keep your eyes peeled for posters, tune in to the local radio station, buy the local paper and ask your local wine merchant.

winemaker
wine-tasting
More from Food and Drink
More from Connexion

Most herbes de Provence sold in shops are not authentically French
17 September 2021
More from Food and Drink
More from Connexion
Get news, views and information from France
Join the newsletter
Subscribe to The Connexion