Christmas in France: The Basque tradition of 'Olentzero' 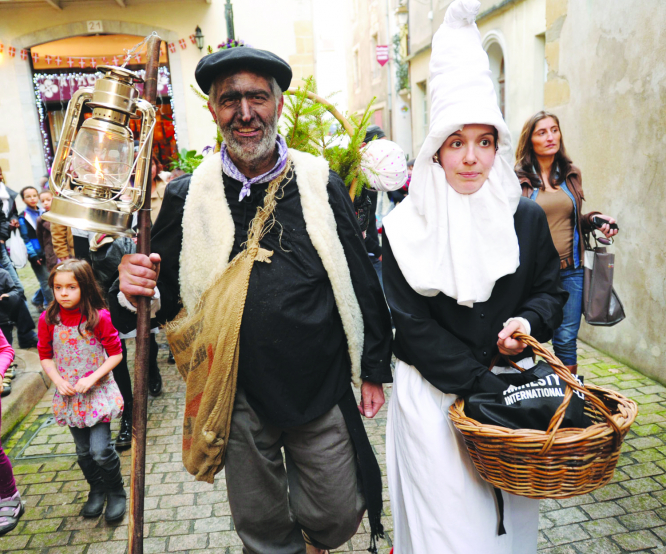 Traditions vary throughout the region. In some villages, children go door to door with a figurine of Olentzero, and will sing in return for money, or food for the Christmas meal.
By Connexion journalist

In December in the Basque Country children are not only excited about Father Christmas. They also have Olentzero, a much older mythical character originating from the pagan festivities of the winter solstice.

He has been around for over 10,000 years and predates both Christianity and Father Christmas.

He has a beard, like Papa Noël, but it is black. He is dressed in sombre, old and dirty clothes with a beret, has soot blackened hands and face, carries a sickle and a gourd of wine.

He also carries a sack of charcoal because Olentzero is a charcoal burner and has come down from the mountain forests to bring his message to the Basque people.

“He is a complex character,” explains Aitzol Salaberria Goñi, one of the members of the association Olentzeroren Lagunak, which works to keep the tradition of Olentzero alive in the region. “He can appear menacing, and in times past he was used to frighten children into good behaviour, but in fact he brings good news. Olentzero appears at the time of the winter solstice and his arrival marks the certainty that the sun will never go out and the days will start to get longer.

“He carries charcoal, which reminds us of the importance of this fuel in days gone by, but also its paradox that though it is black and dirty, it is a symbol of fire and light and the sun, which will heat the earth after winter.”

Traditions vary throughout the region. In some villages, children go door to door with a figurine of Olentzero, and will sing in return for money, or food for the Christmas meal.

In others a big log is lit on December 24 and it must stay alight until December 31, otherwise it is a bad sign for the year to come.

Nowadays Olentzero often visits children in schools. He arrives by pony and cart or on foot, and leaves behind a candle or lantern to represent the light he brings. He gives out sweets, but only in return for songs or drawings.

He is frightening to children at first but they are soon fascinated and love to hear tales of his journey. He is a little reticent but if given the opportunity will show himself to be friendly. He is kind too.

In recent years a new character has been created, who is often at his side. Mari Domingi, is a woman Olentzero has saved from poverty and hardship and now she helps him out.

“The worst thing anyone can do,” says Aitzol Salaberria Goñi, “is suggest he is the Basque Country’s Father Christmas. He is not a commercial figure, but a character who is both mythical and an important part of our culture.”