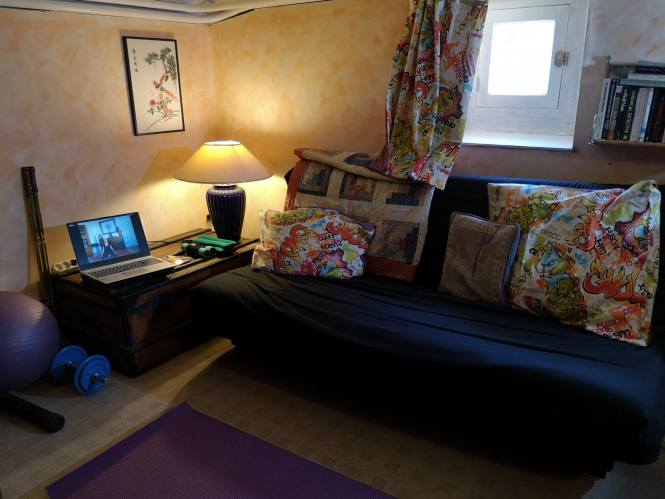 Years ago, when my two youngest children wailed that they could no longer share the same room, my 14-year-old son happily moved into the guest room.

The move only took an hour. He only wanted his schoolbooks, his desk, computer and his clothes. His younger brother acquired not only a room, but book-filled shelves and his older sibling’s toys.

The guest room isn’t on the same floor as the other bedrooms of our small house, so our oldest now had a living space out of parental earshot; the privacy every adolescent craves.

We’d lost a guest room but gained a happy gamer. He said he didn’t care about the room’s decoration, but we changed the curtains and found art for the walls that made the room his. When guests came to visit, he’d graciously vacate his room, taking his computer with him.

Years went by. The college in which he enrolled was a short metro-ride away, and though he had neither the need – nor the desire – to live in college housing, nights spent elsewhere grew in frequency.

His room was empty on weekends, and on some school holidays. He graduated and got his first job; a 15-minute commute from our house. I was delighted, he could stay home even longer.

Six months ago, he announced he was getting an apartment with his girlfriend; he’d be moving out in two weeks, and could he take the bed?

Faster than I thought possible, the room was empty of my son, and his computer. As before, he’d left behind most of his objects, and most of his clothes. My son, the hermit crab, changing his entire shell in order to grow.

Though bed-less, my guest-room was back, but I didn’t have the heart to empty my son’s dresser, or clear off his shelves.

Though he was happy elsewhere, it felt morbid to pack up his things, so I simply cleaned a bit and let the empty room be.

Whenever I entered, I felt a sense of loss. The pain of the first-born leaving the coop, the knowledge that our family was now splintered, part of it living elsewhere.

He was off on his own living his life. I just had to get a grip on that. The guest room could wait until I was ready.

A friend moved a couple of months later, and asked if we wanted a sofa bed, which we accepted and installed with a rearrangement of furniture. Two months after that, my mother told me she’d be visiting France. Could she stay with us?

Her upcoming visit was the impetus needed to get the guest room back in shape. When our oldest came over for dinner, I had him make sure there weren’t any clothes he’d miss if I got rid of them.

Clothes gone, I packed up his objects in a cardboard box, took down his posters and put up new art. My son’s room had re-become a guest room, and was ready for my mother’s visit. Now, when I entered, the sense of loss had made way to anticipation. My son was gone, but soon my mother would arrive.

Then the coronavirus hit. My mother’s visit was cancelled. I went to the guest room and removed the flowers, unmade the bed. The empty room would stay empty. Overnight, the joy of my mother’s visit was replaced by the dread of watching news cycle after news cycle: deaths in Italy climbing every day, cases in France rising, preparing for lockdown.

With my daughter’s boyfriend, we’d be five in the house. How could we make our lives better? The guest room would become our exercise space. The the sofa bed went back into sofa mode and was pushed against the wall. I had the children round up our indoor exercise equipment: Pilates ball, yoga mats, weights and a stationary bike. I found an old computer for online exercise inspiration. And, in a corner, a plastic crate holding food for a week. And chocolate, just because.

Our confinement has transformed the room. It’s now part of our daily cycle. The five of us tend to go at different times of the day, but we also do things together. It has life, a purpose.

As I sit on the sofa bed and look around, I see a few of my son’s shirts still in the closet, books I’d put aside for my mother to read, a manga my youngest left behind this morning, and the yoga mat I just put away. This room is no longer my son’s room, it’s no longer the guest room.
Right now, in this time and place, it’s the room of life. Our little haven in a virus-filled world.