Not just for Christmas: How to grow poinsettias year-round 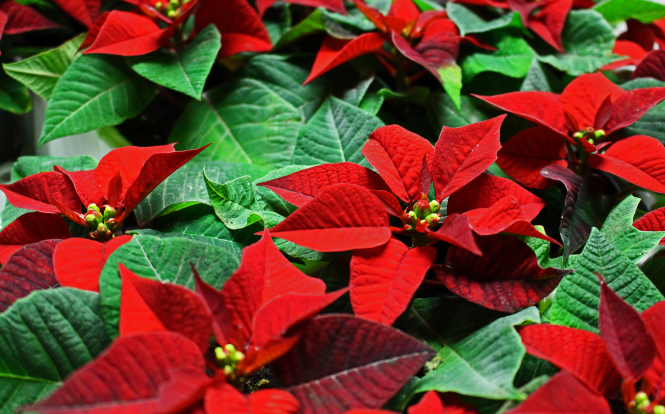 During the hot French summers Poinsettias can easily be grown outside until autumn, provided it receives no more than about 4-5 hours of direct sunlight
By Cathy Thompson

I used to play a fun game when I was a young gardener. It involved an alarm and a dark cupboard. I was trying to keep my Christmas poinsettias from year to year. Since this is a ‘short-day’ flowering plant, it requires darkness of 13 or 14 hours to colour up the bracts in the shades of red, pink or white we enjoy so much at Christmas.

So there I was, with my cupboard (or cardboard box), setting my alarm and still continually forgetting to whisk my pathetic little specimens in and out of the dark for the correct amount of time. The truth was, the plants I was trying to colour-up were never worth the time spent on them.

Poinsettias come from the dry rainforests of Central America

I should have started my whole campaign directly after Christmas. During the festive season itself you will get them to bloom longer and more happily if you bear in mind that they come from the dry rainforests of Central America.

Keep them in good, strong but indirect light – they will not be delighted with a window which grows cold at night, or the dry heat given off by a radiator – and give them a minimum temperature of 21 degrees Celsius by day, only watering when the surface of the compost is dry to the touch.

Excess water collecting in the saucer below the pot should be immediately drained away. And remember that all houseplants prefer lukewarm water as opposed to cold, or they may be shocked into dropping foliage. The plant does not require fertiliser over the festive period.

From January, when you notice some of the leaves yellowing and dropping, do not panic! The plant is entering its natural semi-dormant phase, so reduce watering drastically (to about once every two weeks) when about half the leaves have fallen away.

Resume watering and start fertilising (high potash, such as a tomato feed) in April or May when the plant begins to come out of dormancy. In June, you can repot it and cut it back to about 16cm from the rim of the pot to make it more compact.

During our hot French summers it can easily be grown outside until autumn, provided it receives no more than about 4-5 hours of direct sunlight. Pinch regularly until mid-August to encourage bushiness.

With the arrival of September, poinsettias are best returned to the house to ensure a minimum night-time temperature of about 16°C. Reduce their water supply a little at the same time, but ensure they are kept in a bright (but not sunny) position in the daytime.

The cupboard fun commences in September to early October. And what a rigmarole! You clearly need two alarm calls: one to bring the plant out of the cupboard (or cardboard box) as well one to tuck it away again.

It is all too easy to go off to work, leaving your precious plant in its gloomy bed. That could be two months of two alarm calls every day in order to force the bracts (leafy structures at the base of the tiny yellow flowers) to change colour in response to their 13- to 14-hour nights.

But – relief – once the desired colour is achieved (after about 8-10 weeks) you can slack off a bit on the alarm calls.

It was the American Ambassador to Mexico, Joel Roberts Poinsett, who first fell in love with the flashy colours of poinsettia in the 1820s. Not only did he give them his name, he also gave birth to a million-dollar export industry, since the US has provided the bulk of the world’s poinsettia demands since last century.

The biggest firm in the States to produce poinsettias, the Paul Ecke Ranch in California, still has the world market well-covered at a 50% share, although when they let out their secret technique of grafting more than one plant together to produce bushy specimens rival companies soon entered the competition.

Bear in mind that a wild poinsettia can grow up to four metres or more and has a tendency to a less than charming, distinctly weedy shape – like my cupboard specimens of long ago.

At one stage poinsettias were believed to be life-threateningly toxic if ingested, but it is now understood that they cause only mild nausea or diarrhoea if consumed in quantity, making them relatively safe to grow in households with children and pets.

Unlikely as it seems, they are actually a kind of euphorbia (Euphorbia pulcherrima), so they share the mildly toxic nature of that family – think of the irritating sap that pours from garden euphorbias when you prune the flower stems away in early summer.

It could be wise to wear gloves when you cut a poinsettia back, in case you are one of the unlucky people to have a skin reaction to the sap.

When I was doing my fact-checking for this piece I came across this advice on the growing of poinsettias: the gardener must have ‘green thumbs and a dose of persistence’.

I guess I fell down in the persistence department, because for many years poinsettias have been the only houseplant I think of as a throw-away!

It is planting season in France: Why plant bare root?