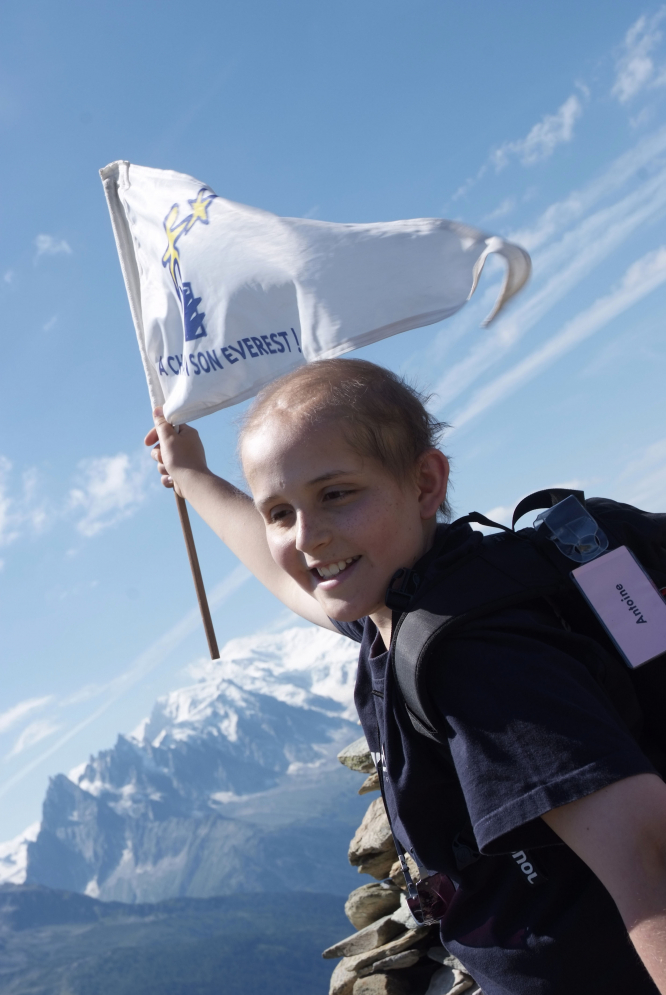 A total €12,000 raised by kindhearted homeowners who opened their gardens to the public in the summer of 2016 has been handed to children’s cancer charity A Chacun son Everest.

The money was raised as part of the Open Gardens/Jardins Ouverts scheme, which launched in 2013 and now boasts more than 100 special gardens on its books. The Connexion is pleased to be a partner of the scheme.

Open Gardens President Mick Moat says the charity chose A Chacun son Everest because organisers felt it was 'unjust' for children to be stricken by cancer.

In 1990, the charity's founder, Doctor Christine Janin, became the first Frenchwoman to climb Everest. In 1992, she completed the Seven Summits challenge, climbing the highest mountain on each continent; and in 1997 she was the first woman to reach the North Pole without mechanised help or dogs.

After standing on the roof of the world, Dr Janin decided to combine her medical and sporting skills to help others face cancer, a challenge she has described as 'their own Everest'.

Mr Moat visited the charity's centre in Chamonix, where children and women attend week-long courses. He was impressed and moved by the work carried out there: “In the entrance porch, I read the Livre d’Or written by previous participants in courses run by Christine and her team. Two of these made a particular impression on me: “You have given us wings”, and,  “We understand now that we are normal children and perhaps even a little better than the others”.

"My dealings with Dr Janin, her niece Marie who showed me round, the staff team and children confirm to us all that we made absolutely the right decision to support this charity.”

A Chacun son Everest helps people who are in remission from cancer but need help restoring their confidence. It recognises that what they’ve achieved in fighting the illness is comparable to climbing Everest and that now they need help to get them back down the mountain.  The charity has helped more than 4,100 children since it started in 1994, and more than 600 women who have had breast cancer since 2011.

Each stay is worth about €3,000 and the charity covers all the costs. Dr Janin explained the advantages of the courses to the children and women who come to the centre in Chamonix, Haute-Savoie.

"It is incredible to see the effects these weeks have on the children. They are proud of what they have achieved and are less frightened of the future. It opens a window in their lives and gives them new energy.

"The women benefit from a week where they can at last look after just themselves - because most have had to care for their families while they have been ill. There are a lot of tears and laughter and an acceptance that they are exhausted and that they have the right to be. There is a lot of sharing of experiences because here they meet other women who have been through the same experiences and they are understood straight away.

What happens on the courses?

For the children there is a lot of sport. We have a well-equipped climbing wall at the centre and there are also walks and outings with sledge dogs and skiing, plus a little bit of yoga. For the women there is sport, plus massage and yoga and time to talk in the presence of a psychologist.

Not all children love sport and some may be frightened of climbing for example?

We adapt the activities to the level of each child. Some are weak because they are still undergoing treatment. We make sure that each one manages to climb their own Everest - and they do - and there is a magic in what they achieve. At the end of the week they all know they are champions.

How important is the title A Chacun son Everest?

The symbol is very strong. I show them the film about me climbing Everest and I tell them that what they have done and are doing is far more difficult than it was for me and that they are stronger and braver than me because theirs is a greater challenge.

I tell them that everybody says that I was amazing to do what I did and that it is the same for them; they are amazing in what they are facing. The two experiences, mine and theirs, are not the same but the symbol of Mount Everest is very strong.

They have courage and a willingness to surmount their problems. Their stay with us becomes an important part of their lives. Parents tell me that they see the difference when the children come home - there is a before and an after stage in their development.

How did you become involved in such an adventurous life? Were you born in the mountains?

No, not at all. I was born in Italy and my mother was a strong personality from Brittany. We were and are a very sporty family and we often went to the mountains. I then studied medicine in Paris and it was with a medical team that I went to Everest. Now I have taken the two influences in my life, sport and medicine, and I have combined them to create this charity.

Do you still climb?

Oh yes. The mountains are my Prozac and it is a sport like no other because you can actually see what you are striving to achieve, the top of the mountain.

You have to reach into your very depths to succeed. It is an effort. It is painful. You have to tell yourself, 'Yes, I can', but when you get there you know you have arrived because you can’t get any further and you are proud because you have real evidence that you have actually got to the summit. Life is full of summits and you have to know that everything is possible.

You have also set up a charity to help Nepal following the earthquake there in April 2015?

Yes. We had a guide who worked with us in Chamonix, Bikram Singh, who came from Nepal and he returned home not long before the earthquake.

He contacted us to ask for help and he is now our local co-ordinator, who is able to tell us exactly what is needed out there. It is terrible to see that people are still suffering. Many don’t yet have homes and are living in tents.

They are in dire poverty and there is an increase in prostitution. It is horrible. My charity Bikram Solidarité Nepal has so far raised €150,000 and we have built 48 houses and supported several families with children. It is separate from A Chacun son Everest but both come from my link with Everest.

What are your future plans for A Chacun son Everest?

We always have projects. This year we built a new yoga room. We would like to be able to increase the number of week-long courses as children and women are continuously being referred to us from hospitals all over France.