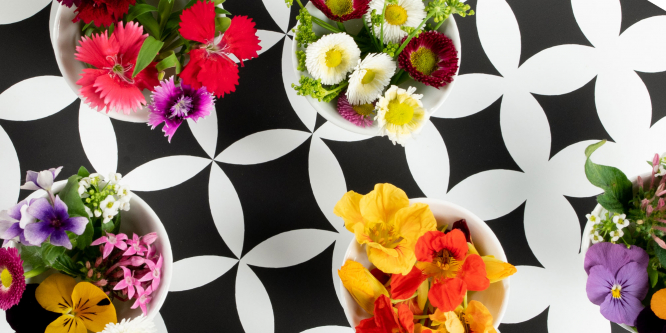 Plants are chosen for taste, and flowers have a wide range of flavours to accompany different dishes, strong, spicy, citrus, peppery, and mild. Pic: Marius Auda

Edible flowers are becoming more popular as both an attractive and a tasty addition to recipes.

Marius Auda is run by father, Gilbert Auda, and his two children, Bernard and Mireille. They started growing flowers in 2004 in response to a demand from local high-end restaurants who were already buying their range of unusual herbs. Mireille Auda says there is now a growing demand from home cooks:

“We sell them in some big supermarkets and people come here to buy them. I am looking into a way of selling them on the internet to respond to an increasing demand, but at present a 125g pot costing €10 will cost the equivalent in postage so I am trying to find a way to sell it with other products to make it worthwhile for the customer.”

She is passionate about growing flowers and discovering their different tastes and uses in the kitchen:

“We have plants in flower all year round. Pansies, for example, are present in winter but not in summer. It is really uplifting to grow a culture which is colourful even on the greyest of days.”

Most of the flowers are ones found in gardens, such as cosmos, marigolds, nasturtium, dahlia and phlox. It is fairly common knowledge that some like nasturtium or borage flowers can be eaten, but others come as more of a surprise such as tuberous begonia flowers:

“They have a delicious lemon taste and as they are quite a fleshy flower they also have a good texture. You can also eat their leaves which taste the same.”

She says you should remember that not all flowers are edible and they have a list of ones to eat and ones which are toxic on their website. She also advises against eating them from nurseries for garden display as they are likely to have been grown using several different pesticides and herbicides.

“Since the Eighties we have controlled pests using predatory insects wherever possible and use natural plant liquid manures and green manures to improve the quality of the soil. We only use chemicals as an extreme last resort solution, but then on as few plants as possible. Every one of our plants has its history digitally recorded so each one can be traced.”

They choose their plants for taste, and flowers have a wide range of flavours to accompany different dishes, strong, spicy, citrus, peppery, and mild. Mrs Auda says they are not there just for their beautiful colours as decoration, but to be eaten and savoured:

"Hyssop has a strong liquorice and mint taste. Sweet alyssum has a honey smell but a surprising peppery taste like rocket. Borage flowers have a flavour reminiscent of the sea and they and their leaves have been traditionally eaten around Nice for centuries in risottos, omelettes and soup.

“The flowers can be eaten raw, but the leaves have to be cooked, and have a stronger flavour. If you like oysters, you will like their taste. Top chefs are now increasingly using the leaves for sushi wrappings instead of seaweed.”

Another plant traditionally used on the Côte d’Azur, she says, is the souci, pot marigold or Calendula officinalis:

“It was always called ‘poor man’s saffron’ in this region and it can be used to flavour and colour dishes in the same way as the exotic spice. The French marigold, tagetes, can also be used for flavour. It is a flower which should not be eaten raw but cooked in boiling water in the same way as a bouquet garni, to give flavour to risotto or in a pumpkin soup for example, with its spicy curry flavour.”

Others she favours for their strong taste are a variety of garlic close to that found in the wild where the root does not develop but where the flowers and leaves are infused with garlic flavour, and pineapple sage, where the red flowers taste of the fruit it is named after.

Root fennel is grown not for the vegetable but for its flowers which have the same aniseed taste, and the flowers of a mild Lebanese variety of cucumber are particularly good in salads.

She says most flowers are used raw to decorate and add flavour to dishes. There are just a few, like borage leaves, marigold, nasturtium or courgette flowers which are cooked. They are used in both savoury and sweet dishes, and pansy and rose petals can easily be crystallised by dipping them in egg white and then in fine sugar and leaving them to dry to be used as cake decorations.

Many flowers are reputed to have high nutritional value packed with minerals and vitamins. Nasturtiums, for example, contain vitamin C.

Growing the plants needs a great deal of attention to detail and knowledge of the individual plants:

“We are lucky to be in a favourable micro-climate situated in a valley between the sea and the mountains with plenty of sunlight. They are grown in greenhouses to manage their conditions better.

“We either grow from seed or buy in seedlings. It is an all year round activity as they all have different growing seasons. They are grown under glass. Some are in pots, because they produce more flowers with less root room and others, which need more space are in open soil. Harvesting is all done by hand. Every flower has to be cut individually when it is ready, and you can imagine that for something like borage, which has very small flowers, that can be very fiddly, especially as they must not be damaged and each one must be in perfect condition. They require a great deal of manpower and that is why they are expensive.”

She says they are one of just a handful of large scale flower growers in France, though there are some smaller producers who have a few flowers as a sideline to their main crops.

Once cut the flowers are packed and sent off to clients as soon as possible. They can be kept in the fridge for up to two hours but are best eaten as fresh as possible. It is advisable not to wash them as the water may damage them and spoil their flavour.

flowers
food and drink
More from Nature
More from Connexion

'Identifying those at risk of cancer before they fall ill is key aim'
28 July 2021
More from Nature
More from Connexion
Get news, views and information from France
Join the newsletter
Subscribe to The Connexion