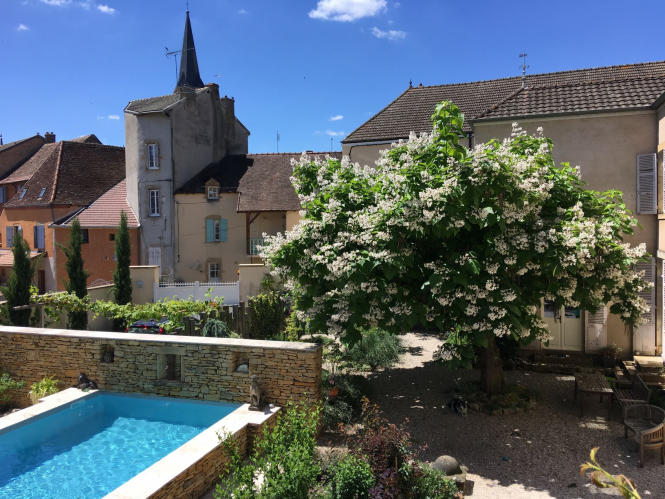 One of the gardens open to visitors is Les Jardins de Charolles, in the town of that name, owned by Chris and Tamsin Anstey Pic:

Open Gardens/Jardins Ouverts, the association which encourages gardeners of all nationalities to open up their gardens, big and small, to the public, to raise funds for charity, has gardens open with health protocols in place. This year many are asking visitors to book a slot during the day by email restricting numbers to around six an hour.

Garden Development Manager for Open Gardens, Sue Lambert is opening her garden at Valaize, 23150, Saint Pardoux les Cards, La Creuse, on June 13 10:00-12:00 and 13:00-18:00 by email appointment at suelambert.opengardens@gmail.com. She is also opening by appointment up until the end of October.

It is separate from her house because she and her husband Mick bought a nearby field with the property, with the aim of growing organic vegetables for food and flowers and shrubs for beauty. It is now a flourishing garden divided into ‘rooms’ dedicated to different themes. There is a spring garden, rose garden, wild flower area, a memorial garden to their son, and a vegetable garden.

“It is a garden of two halves where you will be able to see a range of trees, shrubs and flowers for both hot and shady areas,” says Sue Lambert. “This month the irises and roses will be in flower. I practise the no-dig method which has worked very well. I started because my soil is very stony and digging my first bed nearly killed me and my first crop was not great. To start, I lay cardboard on the grass, sprinkle with water and then layer up whatever I can including compost, leaves and manure.

“The snow and rain works it all down and the grass decomposes into the soil and you plant direct into the top layer. I now get a good crop of carrots which was impossible before.”

She is hoping some of her neighbours will join in: “A man in the village has a traditional French potager and a sculptor is willing to open her small garden and amazing workshop. Another woman new to my area does not yet have a garden to show, but is happy to sell refreshments.

“I am very keen to get across the idea that even if you don’t have a garden there are plenty of ways to help raise money for Open Gardens, which is also a wonderful way of bringing a local community together. We would love to extend the season so we are looking for owners who have good shows of spring and autumn flowers and I am sure there are plenty of town gardens which people would love to visit.”

Rosemary Raine will be opening her garden at Montmoreau-Saint-Cybard, Charente on June 26 from 10-12.00 and 14-17.00 with appointment by email at rosywonder@msn.com.

Her garden is on the side of a hill with three terraces leading down to what was a field and is now a recently developed orchard and potager with herbaceous borders: “It has been quite a challenge to find what would grow on a slope in poor soil,” says Mrs Raine. “We have drought loving plants at the top in gravel including grasses and agapanthus and further down other shrubs and plants which need very little watering. In the field at the bottom I started with a vegetable patch and have just added four new big raised beds.

“There is a mini-orchard with six or seven fruit trees we planted five years ago, which are now coming on nicely. Gradually I have added flower beds. One is themed white and I have a hot border with oranges and yellows which should be coming into flower at the end of June. There will also be late peonies and I love traditional roses which will also be in bloom.

Another charity which raises money by opening its gardens in France is Jardin & Santé, which supports the creation and development of therapeutic gardens in hospitals and medical centres.

Six gardens close together in the Saône-et-Loire and one in the Rhône will be open on June 5-6 to coincide with RDV des Jardins with an entrance fee of €5 for each garden or €20 for the six for the charity.

There is a 44km itinerary allowing you to see all six over the weekend.

One of them, Les Jardins de Charolles, in the town of that name, is owned by Chris and Tamsin Anstey, with two gardens to visit. Behind their house is a small courtyard garden with a surprisingly wide variety of plants.

Since the couple bought the property in 2015 they have changed almost everything other than a Catalpa which is more than a hundred years old and will be in flower; a Pierre de Ronsard rose; a Lagerstroemia and a magnificent wisteria.

“The challenge has been to get the right plant in the right place as even in a small area conditions can vary widely, and we have wanted to achieve colour and shape for maximum duration. There are shady parts and others which are very sunny in summer and over the year the temperature range has been from -12° to 40°C.”

Mr Ansty is keen to include unusual plants which he finds with the help of a local nursery. One is the rare Billbergia nutans, native to South America and a cousin of the pineapples which has an “improbable mixture of pink, pale green and navy blue.”

There are also two extraordinary climbing and semi-evergreen plants, Abutilon megapotamicum which have green leaves and beautiful red and yellow, trumpetshaped flowers every day of the year. In June, he says, his collection of peonies will be gorgeous.

His second garden is a vegetable garden a 400m stroll away, he shares with André Lavergnat, who is a retired market gardener. Mr Anstey used to be a fruit farm manager in East Kent and they have combined skills to produce vegetables and fruit which are the envy of their neighbours.

To combat the extreme temperatures, they warm up the soil by covering it with plastic sheeting in the winter so their vegetables get an early start and protect the baking hot sunny parts in summer using shade netting. “Our aim is to provide fresh veg and salad all year round, and we are nearly there. It has been a real pleasure to collaborate with André and I have made several friends in the area talking together about our passion for growing.”

Process, costs, carte grise: How to register a car in France
7 January 2022
More from Nature
More from Connexion
Get news, views and information from France
Join the newsletter
Subscribe to The Connexion