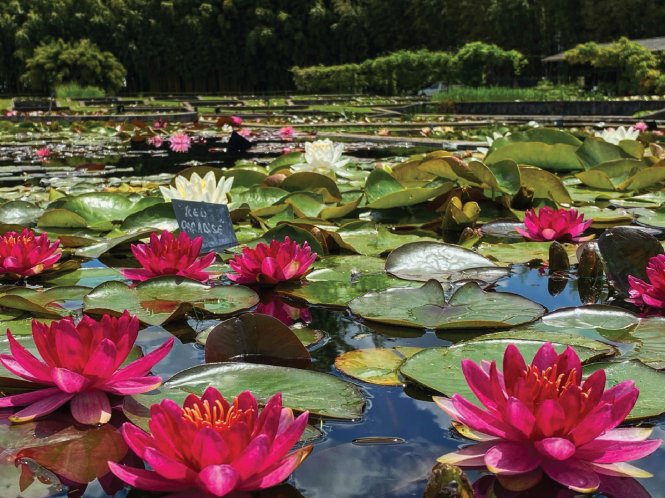 Monet’s worldwide famous series of water lily paintings would never have happened without nurseryman Joseph Bory Latour-Marliac, who was the first man to produce coloured hardy water lilies at the end of the 19th century. Up to then European water lilies were all white.

He owned a nursery, Latour-Marliac at Le Temple-sur-Lot, Lot-et-Garonne, and his gardens are still open for the public to viit and still selling water lilies to a growing number of gardeners discovering the world of aquatic plants.

There is one of the biggest collections of tropical water lilies with a glasshouse for the giant Victoria water lily and a collection of night-blooming lilies, as well as lotuses. There is also a botanical garden, a bamboo collection, Japanese bridge, waterfall and gazebo.

“It is beautiful,” says American owner Robert Sheldon, who bought the gardens in 2007. “There are a hundreds of colourful flowers in bloom from July through to the end of October.”

He says he could not believe his luck when Latour-Marliac was up for sale: “I had moved to France in 2003 to be in Paris. I had always been involved in water gardening, starting in my parent’s garden aged twelve and earning pocket money by helping other people develop their own ponds.

"I was amazed to become its owner at the age of 30, as here are all my passions in one place. Water lilies, gardening, France and entrepreneurship.”

He is working to bring the gardens back to life, increase the water lily growing and selling business and make its extraordinary history better known:

'France does not realise that in the same way the Dutch have the tulip, the French have the water lily'

"Joseph Bory Latour-Marliac was a local man and began by developing the biggest collection of bamboo in Europe. He turned to water lilies and it was his dream to create coloured ones. He spent over ten years trying to cross the white European lily with other wild ones from North America and elsewhere, and eventually managed, by a process which is still not fully understood today, to build a collection of colours ranging from pale yellow to deep red.”

He says they were not popular straight away: “He had to work to create a market. The only people who could afford a water garden were the rich and so he bought a list of all the château owners in France, and sent them his catalogue, and also sent it to his bamboo clients. Little by little business grew and in 1889 he unveiled his new plants at the World Exhibition in Paris in the same year as the unveiling of the Eiffel Tower. It is there that Monet saw them, and later when he built his lake at Giverny, he bought all his aquatic plants from us.

“We still have the records of the purchases which are on show in our museum in the gardens. It was one of the first ponds in the world to have coloured hardy water lilies. I like to think that Monet was astute, and knew he had a subject that was a novelty and exclusive to him. He had shown he could paint trees and flowers just as any artist could, but here was something new, only he could capture.”

The British were some of Latour- Marliac’s most important clients and ensured the success of the new water lily business. The Garden Magazine was the only popular horticultural journal at the time and its founder, William Robinson, printed several articles about the nursery. Later, in 1900, Gertrude Jekyll took over the editorship and she too became one of his clients.

Until the 1970s, the nurseries in the Lot-et-Garonne sold hardy water lilies worldwide. Then other nurseries began to produce them and there was increasing competition from big commercial growers in China. Sales dwindled and the nursery business declined until they were at just over 200 sales a year in 2005. Mr Sheldon is working to build up the nursery again and introduce all the old varieties:

'We had 3,000 sales this year, with a rise in demand during confinement, when people had time to dig out their own ponds and turn to aquatic plants'

He, himself continues to be fascinated by water lilies: “Like ferns, they are one of the oldest plants going back to the time of the dinosaurs. Most perennials only flower for two to three weeks, whilst these will go on throughout the summer and into autumn. They hold many secrets as still no-one understands how and why they open and close. They have a mystery about them.”

He says they do not need too much attention: “It is comparable to looking after dahlias, iris and day lilies as like them they have rhizomes. They usually grow in the water in pots. Once a year it is a good idea to add fertiliser and every three years the pot needs to be emptied, the rhizomes divided and re-planted.”

The history of the Monet lily connection is not well known yet, but Mr Sheldon says he is hoping to make the French aware of this part of their heritage: “We are still a hidden gem, but we think we will become better known in the future.”

The gardens are open after October 15 for sales and group visits only by appointment.

Expand your houseplant collection with this free swap scheme in France