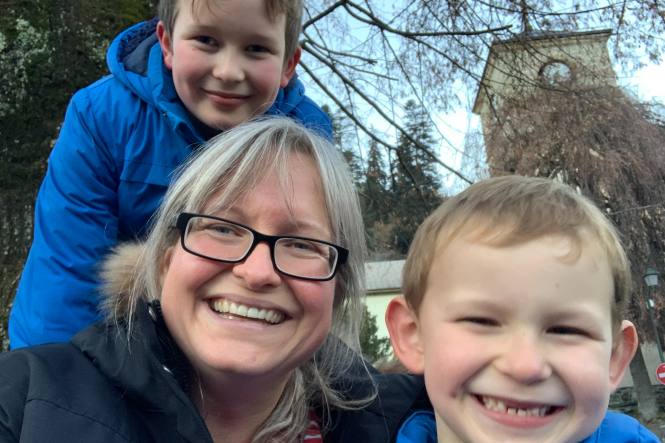 Veryan Young moved from the UK to Haute-Savoie in France with her two young sons to begin a new life in August 2020.

Rory and Jake, now 10 and six respectively, both previously had very little knowledge of French but entered immediately into the school system.

Ms Young told The Connexion that both children have made enormous progress with their French.

“Rory has just had his end of year report and he meets or exceeds the standards in all the subjects, except handwriting, and I think that might just be because he has been taught English handwriting rather than beautiful French curly handwriting,” she said.

Rory said that he was nervous before his first day in a French school but he is now enjoying the experience.

“The first day was quite scary and quite hard, but there were some English-speaking kids in my class and they helped me when I needed it. It would have been a different story if there were less English speakers around,” he said.

Ms Young said that before the boys started school they did some online language lessons through the Oak Academy in the UK, and also went to a local language school - the Alpine French School - in Haute-Savoie, but that was all.

She said that the younger the child is the easier the transition to a new language will be.

“The younger the better but I think that applies mostly from the age of six. After the age of six, the older you are the harder it will be.”

In France, children formally begin to learn to read and write when they enter primary school, usually at the age of six.

She said it is also important when raising children to be bilingual to remember that language learning is not all about speaking and listening.

She said that Rory is naturally a bookworm and reads often in English. He has started an informal English-language book club with other children in the area.

She also gets her sons to write the shopping list in English and to write letters and postcards to relatives back in England.

Ms Young thinks that despite the challenges of starting non-native speakers in a French school there are many positives.

“Aside from opportunities on the job market, it’s more that if you are bilingual then you know that there is more than one way of communicating. I think it is a really important life skill.

She said that parents should not worry too much about the challenges of enrolling non-native children in local schools.

“We were worried that they would arrive at school and it would be like they had landed on another planet but people were very helpful,” she said.

Rory’s own personal top tip was not to take on too much at once. He said he had wanted to learn German last year as well in preparation for secondary school, but followed his mum’s advice and focused only on his French.

“When the teacher speaks to me now I don’t need to translate in my head, I just know what they are saying. I still count in English in my head though,” he said.

If you are raising children bilingually in France and want to share your experience with The Connexion, you can write to us at news@connexionfrance.com