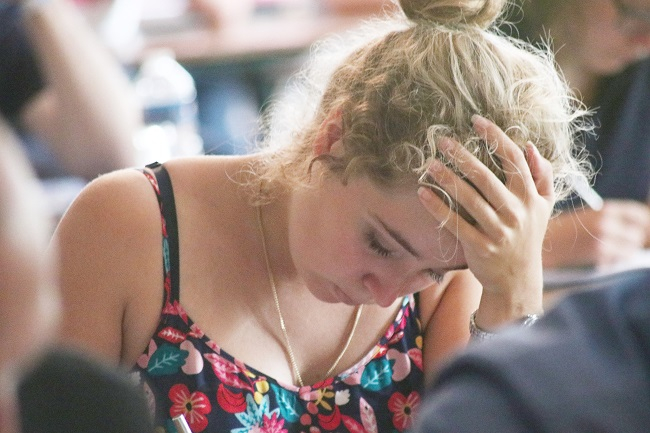 But they are making these choices in a climate of uncertainty, with parents’ associations and teacher unions calling for the government to stop the reforms or, at least, postpone them.

In recent months there have been strikes and demonstrations by teachers, parents and students about this – so what are the concerns?

Until now, pupils have had a choice of three types of academic baccalauréat: science (S), social economics (ES) or literature (L), which still included subjects such as maths, French, history and languages.

With the reforms, pupils will, in theory, be able to choose three subjects from a potential 17, ranging from physics and chemistry to literature and philosophy, with seven arts subjects, including dance and circus.

They will drop one of these in their third year to specialise in just two subjects. Students can add one option in première (the second year of lycée) and another in terminale (the third and final year).

All pupils face lessons in French, philosophy, history and geography, civic and moral education, two foreign languages, sport and general sciences, but no maths, which critics say is a mistake. For technical and professional bacs, subjects will depend on the bac chosen as they vary from laboratory studies to hotel and catering. Pupils are promised 54 hours of careers advice lessons.

The exam system is also changing. Until now, the entire bac has been over a week of intensive exams at the end of terminale. In future, 40% of the marks will be from continuous assessment, of which 10% are based on school reports.

There will be a written and oral French exam at the end of première. In terminale, there will be two exams in each of the specialist subjects, plus one in philosophy, and an oral on a project a pupil has worked on over the past two years.

Around 90% of students get their baccalauréat, according to government figures, but 61% do not then complete their university degree.

The government thinks the new system will make students more motivated and better able to choose a course that suits them.

They also say the new exam system will be fairer, as it avoids basing results on one week of exams, and students will have more advice about their choices and future studies.Teachers’ unions and parents’ associations, however, insist the system is not ready for such change without more facilities and training.

The FCPE, one of the two biggest national parents’ associations, has written a letter to the Minister of Education, Jean-Michel Blanquer, asking him to pause the reforms to allow more time to review them.

The FCPE said choices for students are limited because many lycées are not equipped to provide timetables that suit everyone, nor a full list of specialist subjects.

This means inequality between lycées, and it is not clear how easily a pupil can move to a different school that offers subjects they would like to do. A majority of pupils have not had the advice they were promised.

FCPE President Jean-Jacques Renard told La Croix newspaper that the association was not against reform, but it was carried out without sufficient consultation.

He said: “The directions are contradictory and nothing is clear. The Paris Academy said young people could change lycée if their own did not have their chosen speciality.

“But a note from the government said the opposite.

“Everything has been done in a hurry and the pupils who are in seconde this year have been sacrificed.”

Secondary school teachers’ union SNES has also called for an end to the reform. Their President Valérie Sipahimalani said teachers could not advise pupils about next year because they do not have the answers themselves: “We do not even know how we are going to test them as we have to introduce a system of continuous assessment. We need time to look at it properly.”

Seven teaching unions have also written to the Education Minister asking him to stop what they have described as “an unacceptable reform” for the professional lycées, that would lead to “fewer hours of teaching” and “hamper the success of young people”.

The teachers complain there is not enough time to create new courses: “Less than two months to rewrite the programmes, when in some subjects the hours have been halved and need a complete restructuring.”

The government has insisted the new bac will be an improvement and will go ahead next year.

Fifteen-year-old Douala Dikengué, who is in seconde at Lycée Pré de Cordy at Sarlat, Dordogne, said he is finding it difficult to choose subjects.

He said: “There is pressure to make the right choice. If we get it wrong, it could affect what studies we do later.

“I like literature and languages but also history and politics. If I decide to study social sciences later, I may need maths, but I do not want to do it as a specialist subject. There was less pressure with the old system, because the bacs had a broader base.

“At the beginning of the year it was presented as if it would give us an amazing choice of subjects. If you prefer science, you will do those subjects, and if you want to do arts, you will choose those, as before, but there is more pressure to get it right.”

He is aware of the difficulties for teachers: “If we ask them questions, they say they just do not know. More than 50% joined in recent strikes.”

Asked what he thought about the new oral exam based on a two-year project, he said: “Nobody has told us anything about it and the teachers have no information to give us.”

The government guide to lycées

This month pupils in troisième, the last year of collège, must hand in their final choice of lycée for the rentrée 2019.

Each year, the government publishes a guide to the 4,300 lycées in France to help make that choice. Les Indicateurs de Résultats des Lycées is based on the baccalauréat results of the previous year.

The Ministry of Education stresses its guide is not a classification that ranks lycées. It is intended to indicate the success of each school in helping its pupils to gain the baccalaureate, taking the social background of its intake into account.

This relates to the grading system in the bac where pupils can get a straight pass, or with higher marks a mention assez bien, a mention bien or a mention très bien.

This is there to show how the lycée has performed in relation to other lycées with comparable profiles, taking into account the fact that it is easier to get good results from very good students.

To work this out, age, social background, gender, ability at school and the socio- demographic make-up of the area are considered. So a school with “good pupils” may perform worse than expected and get minus points, whereas a school with “poor pupils” may do better.

The results are printed in the press, often in order of what the newspapers consider, from the statistics, to be best. You can look up lycées at education.gouv.fr.

Pupils in the Ile-de-France, Lyon, Nancy-Metz, Rennes, Toulouse and Guadeloupe had the best chance of getting their bac.