Make sense of... Visiting the dentist 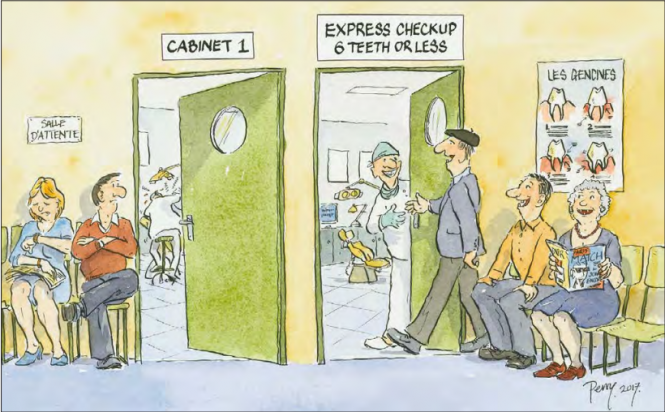 Several more costly kinds of dental work are not well-reimbursed in France, resulting in some patients going abroad for treatment, relying on an expensive top-up policy – or even not getting work done. Various improvements were said to be in the pipeline but have now been delayed by at least a year (see below).

As with doctors’ visits, le tiers payant system (where the patient does not advance the state-reimbursed part of the fee) was supposed to become a right for dental visits from this December – however on going to press this timing is in doubt.

To find a dentist, one reliable way is to use the official medical directory at annuairesante.ameli.fr

Select chirurgiens-dentistes and choose conventionné under type d’honoraires. If the dentist is not conventionné (most are) they do not have to respect set tariffs so will probably be expensive and you will receive little or no reimbursement.

Note that, unlike in some other medical specialisms where many doctors are ‘sector 2’ or honoraires libres (meaning you are reimbursed up to standard rates but actual rates billed are higher), this is not the case for dentists, with the exception of a few with a droit permanent à dépassement (DP). You should be informed in advance if this applies.

The ameli.fr site also allows you to select by gender. Finally insert your area of France. Leave à proximité de ticked to find ones nearby as well as in the precise area. There is no official way to find an English-speaker, apart from word of mouth – or asking them.

Families should be sent forms offering free check-ups for children at the age of six, nine, 12, 15 and 18 in a scheme called ‘M’T dents’.  You need to use it within six months. Any follow-up in the following nine months is reimbursed at 100% with the exception of orthodontics or prostheses, which are at the usual price.

Apart from this, dental care works under the usual reimbursement system using the Carte Vitale. There is, however, no requirement to be referred by your GP.

A check up and most routine care has fixed tariffs for which you are reimbursed 70% and, if you have a top-up, it will usually pay the remaining 30%.

Apart from the exception of a dentist not being conventionné there will be no charge above the set rates for a check-up (€23) or for routine care, such as €28.92 for a scale and polish.

There are slightly higher tariffs for the procedures on permanent teeth of children aged under 13 (possibly because such work is an exception).

Because prices for the above procedures are low, dentists make up with fees for other work where they are free to charge as they like, although this is meant to be done ‘with tact and measure’.

Set tariffs for prosthetics (false teeth, inlays, crowns etc) are well below actual fees charged, so they are costly if you do not have good top-up cover. For example, a crown has a fixed rate of €107.50 (reimbursed at 70%, ie. the patient gets €75.25) but usually costs €500 or more (two or three times as much at certain practices). A bridge to replace a missing tooth has a fixed tariff of €279.50 but will often cost more than €1,000.

Before doing such work a dentist must give a detailed devis showing how much is state-reimbursed.

Top-up policies vary in how they cover dentistry and usually state that they will cover up to a percentage of the fixed tariff eg. 100% or 200%. A maximum ceiling may be applied.

Orthodontics – used to improve the appearance of crooked, protruding etc, teeth – is not reimbursed for adults, nor are certain other mostly aesthetic procedures like whitening and veneers, or implants (a screw inserted into the jaw to receive a false tooth).

For children this work is reimbursed if it is started before the age of 16. As with prosthetics, dentists are free to charge above the set tariffs, which include €193.50 (reimbursed 100%) for six-months of orthodontics treatment.

Reforms planned since late in the Hollande presidency are intended to rein in the price of prosthetics, while at the same time fixed tariffs for routine treatments are expected to rise to compensate.

Ceilings were supposed to come in from January 2018, to be lowered over five years, with special measures in areas where prices are currently especially high to avoid the change being too abrupt for dentists. For example a porcelain fused to metal crown would be limited to €550 from 2018 and €510 from 2020. A slight increase to the state tariff level was also proposed, for example €120 instead of €107.50 for a crown.

However the Health Ministry says the changes have been put off until January 2019, pending discussion with dentists’ unions, Cpam and mutuelles.

People on low incomes eligible for the CMU-C already benefit from ceilings, which are readjusted as of this month, for example to a maximum €250 for a metallic crown, up from €230. As of this month too recipients of aide au paiement d’une complémentaire santé, which helps those on incomes just above the CMU-C level to pay for  a top-up also benefit.

One of the election promises of Emmanuel Macron was to increase the reimbursement level of dental prosthetics to 100% by 2022 – however there is little detail as yet. If nothing else changes, for example, it could just mean 100% of a fixed rate of €120 for a crown, still leaving a big gap for the patient or their mutuelle to fund.

Make sense of
dentistry
More from Health
More from Connexion

Artisan soap maker: 'After six years, it still gives me a thrill’
22 October 2021
More from Health
More from Connexion
Get news, views and information from France
Join the newsletter
Subscribe to The Connexion