18th century château in southwest France up for auction from €90,000 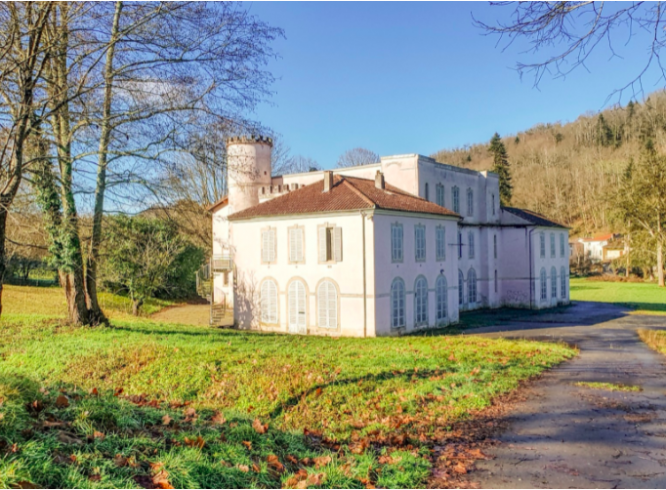 The property includes a four-storey country house and a semi-detached house with two floors Pic: Agorastore

A château built in the 1700s in southwest France will be sold at auction in September, with bids starting from €90,000.

The property is 1,400m2 and includes a four-storey country house and a semi-detached house with two floors.

It sits on 22,600m2 of land in the Parc Naturel Régional des Pyrénées Ariégeoises, Occitanie, with a stream running through it.

The low starting price for such a large property is due to the amount of renovation work required to make it habitable.

The château was built in the 1700s and originally belonged to viscount Albéric de Narbonne.

When he died, no one inherited the property.

It was then used as a convent by nuns before falling into the hands of the mairie de Paris, who used it as a holiday camp for children.

Mayor of nearby village Nescus, Geneviève Amardeilh, told La Dépèche: “We hope with all our hearts that it will be sold, because it has been abandoned. The château needs a real project so that it can live.”

She has some suggestions: “I hope that it won’t be turned into a nightclub. Why not a hotel, a bed and breakfast, or a trendy zen space? A home for the elderly would be great too.

“There is a big park with trees and a stream, and a little church next door. I think it could be a very beautiful place.”

The auction for the Château de Nescus will begin on September 14 at 12:00 via the site Agorastore.

It is not the only château owned by local authorities to go on sale recently.

In June the town of Dugny in Seine-Saint-Denis put the 25-bedroom Château de Chincé, near Poitiers, up for sale.

The 950m2 property has three levels and frescos by Italian artist Numa Marzocchi de Bellucci. It sold for €415,440.

'Identifying those at risk of cancer before they fall ill is key aim'
28 July 2021
More from Property
More from Connexion
Get news, views and information from France
Join the newsletter
Subscribe to The Connexion