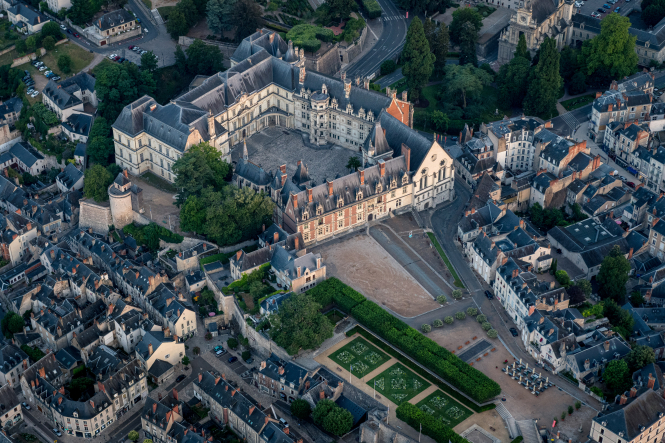 Each wing of Château Royal de Blois dates from a different period – Gothic, Renaissance and Classical – so it is easy to see the difference between each.

Morgane Lecareux, responsible for its collections, said this makes the chateau a good place to start an exploration of the Loire chateaux, because you will then be able to recognise more easily the periods the others were built in.

She said: “We have a square courtyard and when you stand in the middle, you are surrounded by three of the four architectural periods, making their differences very visible.

The original fortress was developed from the 9th century onwards on the headland overlooking the town and the Loire river.

Only buildings from the 13th century remain, including the Estates General Room, one of the oldest and grandest non-religious Gothic rooms preserved in France, three towers in the François I wing, and a round tower in the grounds.

“The first constructions were built with defence in mind, with great, thick walls, arrow slits and very little decoration. They were also there as a symbol of the power of the owners.”

The first king to build at Blois, in the Loir-et-Cher department, was Louis XII, and he did so because he came from the region. He wanted to transform the fortress into a luxury urban palace.

This is illustrated by the large windows opening on to the courtyard, instead of the earlier narrow slits to make sure no one could see, or shoot arrows, inside.

It was built in brick and stone with pinnacles on the roof windows and pointed arches, typical Gothic features. There are hints, though, of an early Italian influence on French architecture.

“Louis XII had fought in Italy and brought back ideas for his chateau,” said Ms Lecareux. “This building marks a transition between the French Gothic and the Italian. Sculpted columns with heraldic designs and candelabra-laced decors and the arcades are Italian influences.”

In 1515, François I followed Louis XII as king, and immediately began the first building project of his reign at Blois, inspired by the Italian Renaissance.

“There are still French elements to the architecture. In Italy, the windows were placed so they would provide a symmetrical design on the outside of the building, whereas here the windows are placed in relation to the rooms behind them.

“The gargoyles representing animals are also typically French, dating back even to the Middle Ages. But we see the Italian influence in its decor, with its pinnacles, and the exterior façade which looked out on to the gardens which existed at the time and was directly inspired by the Vatican.

“On the courtyard side is a magnificent, highly decorated, exterior staircase with large openings which allowed members of the court to look out, and meant they were on display to the outside world.

“Though other staircases like this exist, this one is unique in the way it is so lavishly decorated and it is the main feature of the building. It is an incredible sight.”

The next building phase took place in 1635-38 by the brother of Louis XIII and heir to the throne, Gaston d’Orléans.

He wanted to destroy the existing building and erect a totally new chateau.

The plans still exist. Luckily for the modern visitor, who can now see architecture from different periods, his plans were never completed because the birth of the future Louis XIV in 1638 meant he would no longer inherit the throne and his expectations were drastically reduced.

He did, however, build a main dwelling house. This is in the Classical style, according to 17th century tastes, paying tribute to antique Greek architecture with columns, pilasters, capitals and pediments.

“It is a real example of the beginnings of French Classical architecture, which was seen on a larger scale when Versailles was built later on in the 17th century.”

The numerous Loire chateaux date from several different periods and nearly 50 are open to visitors.

Ms Lecareux said there were many reasons for this proliferation: “The mild climate makes it an agreeable place to live.

“It is in a central geographical position, close to Paris and next to a major river. There were also great forests where the kings and nobles could enjoy their major pastime, hunting.

“The kings also held court in the region, so many of the members built homes nearby, above all in the Renaissance period, when in particular a vast number of the chateaux were built.”

An exhibition of photos throughout the chateau gives an extra insight into its architectural secrets.

They have been taken in places the public either does not have access to, such as storage rooms for collections not on show, or where the public cannot easily see, such as details high up on ceilings or hidden around corners.

The exhibition runs until November 22.

France reopens: Ideas for what to see and do in summer 2021