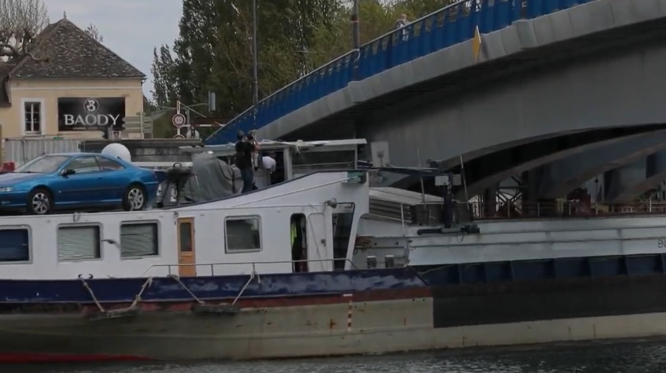 The bridge is now 38 centimetres lower than it was before, meaning some barges can barely fit underneath Pic: FranceInfo / francetvinfo.fr / Screenshot

A court case has been brought in north-west France after the €8million restoration of an historic bridge reduced its height by 38cm, meaning some barges now struggle to pass and local jobs are threatened.

The department council of Yonne, in Bourgogne-Franche-Comté, authorised the restoration of the bridge, which dates back to the 1940s, in the commune of Pont-sur-Yonne.

The work was part of an €11m package intended to help local businesses increase exports of goods worldwide. But the new bridge clearance is 38 centimetres lower than before, and local barges are struggling to pass underneath.

The Chambre de Commerce et d’Industrie says that more than 1,000 jobs are now threatened in the area as a result.

David Buquet, director general at Logiyonne, which manages the river port of Gron, told FranceInfo: “This is a waste of public money. Creating constraints like this means there are barges that will surely not be able to come here, or will considerably raise their prices. Fewer boats available means soaring transport costs.”

Pascal Malbrunot, a boatman who uses the river, now has to be careful not to damage his barge when passing under the bridge, and says he almost has to duck himself.

He said that he and his fellow river-users had previously told the department about the risks of lowering the bridge clearance.

He joked to FranceInfo: “Be careful not to damage the bridge with your skull! I manage to go through because [my barge] does not have a bulky load. But we don’t understand how the department continued to make the bridge lower than the old one, when we did warn them.”

The boatmen and women who use the river have now launched a court case against the department, in protest at the cost of the work and their threatened livelihoods.

The department said that river management company Voies Navigables de France, specified that the bridge must conform to a minimum regulation height of 4.70m which, at 5.10m, the bridge does despite being considerably lower than the previous bridge.

Virginie Pucelle, deputy director of Voies Navigables de France in Bourgogne said that while the bridge does conform to the regulation height, the authority is still puzzled by the department’s work.

She said: "At no time did the project owner, the Yonne department, mention its desire to reduce the height of the bridge. Beyond the regulations, a bridge that is lower than an old bridge is above all an action that is inconsistent with the development prospects of the route.”

Voies Navigables de France says it can fix the height but at a cost of €1m and work needing at least three months.

So far, the department has declined this offer, with Yonne president, Patrick Gendraud, saying that “it’s not as simple as that”.

He said: “The local assembly would need to debate this, I cannot make the decision single-handedly, so it’s just not feasible.”