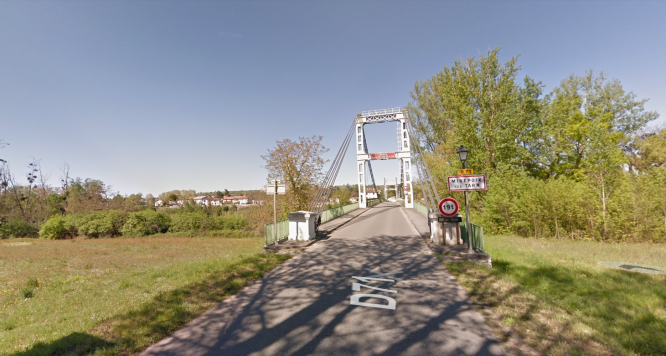 The badly damaged remnants of the collapsed suspension bridge at Mirepoix-sur-Tarn will be dismantled, the town's mayor has said, amid calls for an urgent safety review of thousands of bridges in France.

Two people were killed when the bridge failed at about 8h10 on Monday. The body of a lorry driver was found in the river Tarn hours after that of a teenager who was travelling in a car crossing the bridge when it collapsed. The 15-year-old's mother was able to make her way to the river bank, but was unable to save her child.

Eric Oget, mayor of Mirepoix, told media that the lorry on the bridge at the time was more than twice the 19-tonne permitted weight limit for the bridge, apparently confirming earlier witness reports, who said that the limit was frequently ignored. Speaking to France Bleu Occitanie on Monday Mr Oget said the vehicle was "about 45 tonnes, that's what the gendarmerie services say".

"The gendarmes started to estimate the size of the truck and we are on these volumes," he said on Monday. "The fire brigade will get into the water to moor the truck and car, after which the bridge will have to be dismantled."

An investigation has begun into the cause of the collapse as the co-author of a 180-page report on bridge safety published in June said there was "an urgent need for action" to correct "the very serious [safety] situation of bridges in France".

Senator Patrick Chaize told the franceinfo website: "After the collapse of the motorway viaduct in Genoa (Italy), which killed 43 people in August 2018, we wanted to sound the alarm about the very critical situation of bridges in France. We wrote in black and white that at least 25,000 bridges deserved particular vigilance in France."

He said that a proper study of all bridges in France was necessary to ensure no repeat of the Mirepoix tragedy.

"We do not know precisely how many bridges there are in France. It may sound crazy, but it's the truth. We have an estimate of 250,000, but it could be 200,000 or 300,000. An inventory, both technical and physical, would make it possible to identify structures that present a major risk.

"Perhaps this bridge would then have presented a number of points of vigilance and concern."

The report called for the urgent establishment of a concerted effort to ensure bridge safety, with the necessary funding. "We are asking for a kind of "health booklet" to be set up to monitor the maintenance of each bridge. When we decided to name our report "Bridge Safety: Avoiding a Drama", it was precisely to avoid a disaster.

"Unfortunately, Mirepoix's accident happened. It is really urgent to intervene. We will insist that particular attention be paid to this issue during the discussions on the finance bill."