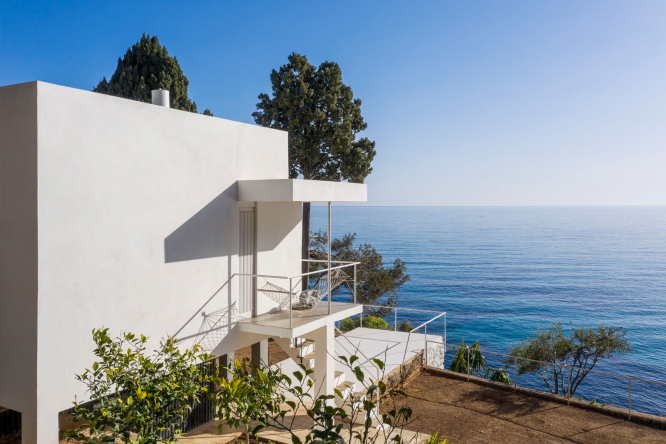 The building’s unusual name was a simple code of their names: E is for Eileen, 10 is for the letter J for Jean, 2 for the B of Badovici, and 7 for the G of Gray Pic: Courtesy of Manuel Bougot

Villa E-1027, created by early 20thcentury Irish designer Eileen Gray at Roquebrune-Cap-Martin in the Alpes Maritimes, was in a severely decayed condition when it was bought by the Conservatoire du littoral, the government body which protects outstanding parts of the French coast, in 1999.

After preliminary restoration work from 2004 to 2012, charitable body Cap Moderne was set up in 2014 to coordinate the restoration. Its president is Michael Likierman, who was the founding CEO of the French arm of Habitat furniture store.

Gray was one of Habitat founder Terence Conran’s favourite designers. Mr Likierman said: “We wanted to make it possible for anyone going into the house to understand the magic and genius of Eileen Gray.

“She was a great designer. She had an eye for the form of the modernist movement, even though that was not where her reputation had originally been made.

“Her Dragon Chair, sold for €22million at Christies in 2009, a world record price for 20th-century furniture, does not look modern and was made in 1919.

“But 10 years on, she had taken on the modernist movement and applied it both to the house as a structure and also to everything inside it.

Gray was born in Co Wexford, Ireland, in 1878. She studied at the Slade School of Fine Arts in London before moving to Paris, where she opened boutiques for her furniture as her reputation grew.

In 1926, she bought land at Roquebrune- Cap-Martin to create a house for her partner, architect Jean Badovici. It is likely he helped her, particularly with the technical aspects, but hers was the major input.

The building’s unusual name was a simple code of their names: E is for Eileen, 10 is for the letter J for Jean, 2 for the B of Badovici, and 7 for the G of Gray.

The building – a holiday house by the sea – is L-shaped on two floors with a flat roof. Everything, down to the electric cables held in place with tiny ceramic plaques, was designed by Gray.

It took her three years to draw and design the furniture. “Everything is in the detail,” said Mr Likierman. “The exploration of what people need was incredible. She has a little shelf next to the basin in the bathroom saying pour les dents.”

Her furniture is functional and ingenious. There is a table lamp on a folding metal arm, pivoting drawers, and a clever circular chrome bedside table whose height can be adjusted by a steel chain.

All the furniture has been reconstructed from Gray’s drawings and from photographs, and made by specialist craftsmen from three countries. Some of the materials and methods she used no longer exist today, so researching them was crucial for an authentic restoration.

“Today’s tubular steel furniture is mostly chrome-plated,” said Mr Likierman. “It was first used in 1929, just as she was finishing the house, so the original ones in the house were nickel-plated.

“Chrome has a blue steel look to it, while nickel is yellowish. This changes the way the furniture looks, so all the recreated furniture in the house is nickel-plated.

“That kind of detail was very important: nobody makes curtain fabrics as they were made in the 1920s, so we turned to the University of Vienna, which has a specialist textile department which can reproduce 1920s curtain material. And it really does look very special.”

The writing table was a particular challenge, as it has not survived and there is just one existing photo, where it is visible in the background. The design team studied the photo at the National Museum in Dublin, and the nickel-plated steel was imported from Vienna and shaped by craftsman Marcel Mansui from the Var.

Plating was completed in the Alpes- Maritimes, and the wooden desktop is by Alain Furgeri from Menton.

Gray and Badovici split up in 1932. She left, as she had given him the house.

Le Corbusier was a frequent visitor and he painted murals on the walls – according to Gray’s biographers, she did not think much of them

Those considered most in tune with the style of the house have been left on show.

The house was at first well looked after but the last private owner sold the furniture at a famous auction in Monaco in 1992, which is where most of the modern collections come from at the National Museum of Ireland, the Pompidou Centre, the V&A, and the MoMA in New York.

After his death, the house was left open to the elements and squatters.

By the late 1990s, it was in a bad state. It was saved when the Conservatoire du Littoral bought it.

You can visit E-1027 by appointment, as numbers are restricted due to the size of the house.

Another exhibition about E-1027 is taking place at the Basque Institute of Architecture in San Sebastián, Spain, until October 10 (eai.eus).

There is a reproduction of the master bedroom, as well as other pieces of furniture. and there are films and information about Gray and her work.