Château de la Mercerie: Folly of brothers who could not stop building 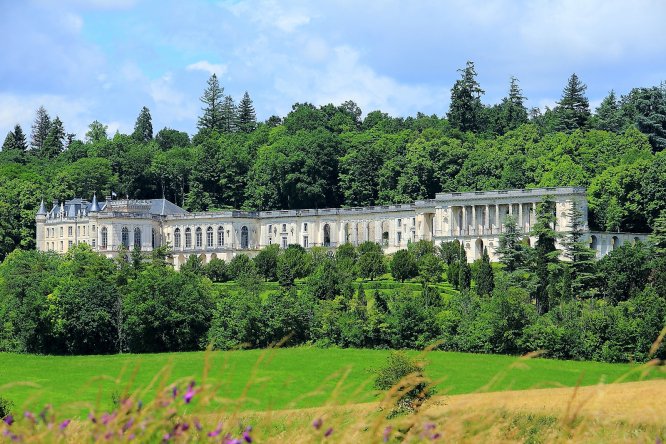 After the war, the Réthoré brothers started adding classical façades – at first for art galleries and then purely for the sake of it at Château de la Mercerie Pic: Jean-Claude Brunet

For years the Château de la Mercerie, just outside the village of Magnac Lavalette Villars in the Charente, was left to fall into ruin.

Local legend erroneously tells how the ever-growing façade ultimately ruined the two brothers who built it.

“It is true that the fortune spent on the façade and the galleries in it was huge,” said Jean-Claude Brunet, a founder member of the association formed to save the chateau.

“However, it was not that which ruined the brothers, but rather a scheme to build a 1,000-cow dairy farm to take on Danone in the yoghurt business, which turned sour and lost them their money.”

The brothers, Raymond and Alphonse Réthoré, bought Château de la Mercerie in their early 20s, in 1924.

Their family made its fortune providing machines for heavy industry, while the brothers themselves imported dry-cleaning equipment from Italy.

During World War Two, Raymond, who was the more outgoing brother, sheltered the Jewish socialist politician Pierre Mendès France for a couple of weeks in the chateau

Mendès France later (briefly) became prime minister and is said to have rewarded the Réthoré brothers by helping them secure exclusive rights to the French market for their dry-cleaning machines.

At first the brothers worked on the chateau itself, which was built in the 1890s. After the war, however, they started adding classical façades – at first for art galleries and then purely for the sake of it. Using local dressed stone, they kept teams of masons constantly at work until the mid-1970s.

Various architects were involved with the project over the years, but it was Alphonse, who called himself an architect despite having never formally studied the subject, who directed most of the operations.

Meanwhile Raymond became mayor of the village and an MP. His travels saw him bring back art and objects from around the world for display in the chateau’s galleries.

Among surviving artefacts are huge frescoes made of Portuguese azulejos tiles, which line two of the galleries.

Moving in political circles, Raymond was friends with François Mitterrand, who was born and grew up in Jarnac, 45km away, and who later became president.

Mitterrand visited the chateau many times, including just before his death when he was shocked to discover it had fallen into disrepair.

It is said that Alphonse lost his mind when the brothers were ruined financially. He spent his final years in an Angoulême hospital, before dying in 1983.

Raymond followed in 1986, and they are both entombed in one of the façades.

With no children, the brothers intended to leave the chateau to their devoted secretary, but she died before Raymond in a car accident and it was her brother who inherited

The estate was crippled with debts and he quickly sold it, as well as the art works.

The next owner was notorious for buying chateaux and then demolishing them, stone by stone, to sell as kits to Americans. However, classification as a monument historique saved La Mercerie from that fate.

For 20 years it was left to crumble, before new owners stepped in – the Paris-based property firm Foncière Volta.

Working with the village’s mayor, Didier Jobit, and others including Mr Brunet, Foncière Volta agreed a 75-year lease to an association set up to save the chateau. Funding was supplied by local authorities.

At one stage 400 volunteers were working on the site, but the association is now down to a core group of around 150, including Josephine and Tom Malcolm, who give English language tours twice a week on Tuesdays and Thursdays for an entry fee of €7.

Another part of the association provides training and work experience for long-term unemployed people, in trades as varied as masonry, carpentry, forestry, gardening and tourism administration.

Within the next few years it is hoped the chateau can make money for its continued upkeep by accommodating weddings and corporate events.

'It was madness to build this place as the brothers did, but it is also a bit mad of us to work so hard to save it'

“However, you can see it is a force for good, and at last something positive is coming from such a strange building,” added Mr Brunet, now retired, who was the association’s first employee.