‘Holiday home’ of Little Prince author up for sale in France 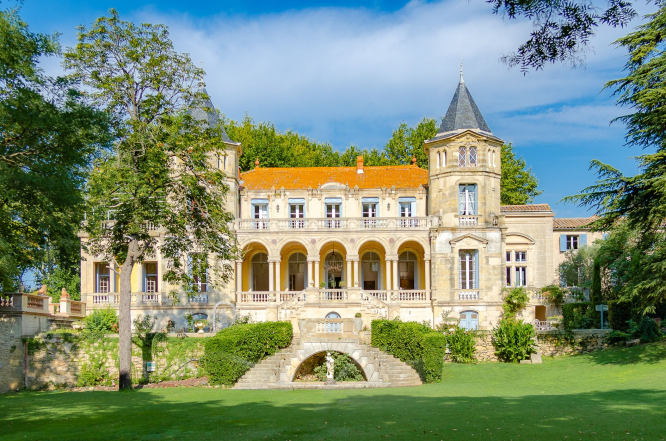 Château Sainte-Cécile, near Cap d’Agde in the south of France is chateau once owned by the family of The Little Prince author Antoine de Saint Exupéry
By Connexion journalist

A chateau once owned by the family of The Little Prince author Antoine de Saint Exupéry is up for sale.

“Beautiful Venetian-style folly” Château Sainte-Cécile, near Cap d’Agde in the Hérault, was bought by the marquis Jacques de Saint-Exupéry in 1933.

Antoine de Saint-Exupéry, whose father died when he was just four and who spent a lot of time with his wider family growing up, was a regular visitor for holidays until the start of World War Two.

A bicycle he is said to have used regularly is preserved, hanging from the wall in one of the reception halls of the property, which was sold by the Saint-Exupéry family after the war.

After learning to fly in the French air force and pioneering the La Poste airmail route between France and Argentina, Saint-Exupéry rejoined the Free French Air Force in 1943 while in the US.

He was reported missing while flying reconnaissance missions over southern France in 1944, just before the Allied invasion of the south.

In 1998, his silver ID bracelet was found in the sea near Marseille, and in 2000, the wreck of an airplane was found, which was confirmed as Saint-Exupéry’s in 2004.

The Little Prince, a children’s book written while he was in the US about a pilot stranded in a desert who meets a little prince who has fallen to earth on an asteroid, is regularly listed as one of the top four best-selling books in the world.

The story, loved by children and adults alike, has reportedly been translated into 250 languages, making it the world’s most translated novel.

The chateau had already had several owners before the Saint-Exupéry family bought it.

Sited in the village of Thibéry, 18km from the sea at Cap d’Agde and around 25km from Béziers. It was built by the Andrieu family, which became rich through distilling and is still in the same business.

It has a Florentine façade and Corinthian columns, and an enclosed loggia, all decorated in a Venetian manner.

At the time, when wine and related products were booming (trains filled with tankers of red wine left every day to go to Paris), it was usual for families who were doing well to build chateaux to flaunt their newly acquired wealth.

They are still known in the region as Chateaux Pinards – pinard being Parisian slang for cheap red wine.

Since the Saint-Exupéry family owned it, the chateau has had extensive renovations, with the last owners equipping it as a large chambres d’hôtes business, and also for events such as weddings.

There are 17 en-suite bedrooms in the outbuildings and seven in the main house. Furniture is included in the €6.9million asking price.

Bruno Zermati, handling the sale for Sotheby Realty’s Montpellier office, said: “The connection with Saint-Exupéry is fairly tenuous, but when he used to come to holiday here he was already well known as an author and for his aeronautic exploits, and the village still talks of him.

“Obviously, the new owners could turn it into a simple residence, but now it is really set up for events and to be run as a business – the vaulted ceiling outbuilding of 220m², which used to house a distillery, for example, is perfect for wedding receptions.”

The chateau sits in a park of 2.5 hectares and has 4,000m² of living space, patios, a French garden, a chapel, an orchard, and a bamboo plantation.

It also has a pool, made out of a former Italian-style irrigation reservoir.

Oyster shells could be used as mortar for houses in France

French countryside sounds and smells to be protected by law