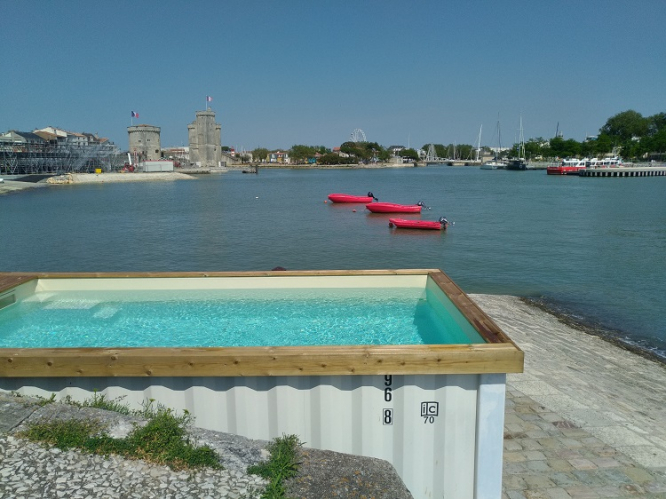 The pools, which can be above ground, half buried or fully buried, cost around 30% less than a conventional one built using bricks and mortar, claims Guylain Buffet, owner of Pool Container, who sold 17 of them in his first year.

“It took us five years to figure out how to adapt the containers for French customers,” he said.

“In Australia, they demand a higher quality liner, made out of plastic, which brings the cost right up to a bricks and mortar pool. Here we developed a system of using a marine plywood and glass fibre liner.”

Hundreds of thousands of barely used or damaged steel containers are stocked around the world because shipping firms have found it is cheaper to buy new than to reuse them.

“It is a tremendous waste of steel, and that is one of the reasons why I was attracted to using them for something else,” said Mr Buffet.

The old containers are brought to the company’s workshop near La Rochelle’s docks and have any dents knocked out before being inspected carefully to ensure there are no holes.

Grinders and welding torches are used to cut out the roof and then extra metal reinforcing is welded into place to make sure the structure does not deform with the weight of water.

The final step is to build in the lining, including steps, which is then covered in fibreglass in a choice of 12 colours, or in prints to resemble tiles or water patterns.

Liners are guaranteed for 10 years for the standard style or 15 years for a thicker one.

Pumps, filters and optional heat exchangers or counter-current swimming devices are housed in a pump house, built in to the pool.

Prices start at €7,990 for a half-container pool, measuring three metres by 2.44 metres, which is usually installed on patios or in small gardens.

The “premium” 12-metre pool is made of two standard six-metre containers joined together. Most of the pools have a depth of 1.15 metres of water, but this can be increased to 1.40 metres.

Prices include pump equipment and installation but not earthworks for ground level or half-buried pools.

For above-ground pools, a gravel bed is usually all that is required.

“One huge advantage is that we are quick – once a client has decided what pool they want, we usually have it built in two months, including all the pumps and other equipment, and it is installed in a couple of hours,” said Mr Buffet.

Installation involves lifting the pool container off a lorry with a crane and lowering it into place, often lifting it over a house to reach a back garden.

All except the 12-metre pool are exempt from the need to be declared to the mairie and to the tax authorities, although if you live in a protected area around a historical monument, you might still have to make a déclaration de travaux.

Taxes on the 12-metre pool are added to the taxe foncière and vary, depending on communes, from €100 to €200 per year.

Delivery costs for the pool range from €800 to €2,500, depending how far from La Rochelle the pool is going.

The company is prepared to deliver throughout Europe.

Pools are not the only use for the recycled containers constructed by Pool Container.

Containers can be converted into everything from building site offices to greenhouses or housing extensions, where they can be used to make extra rooms.