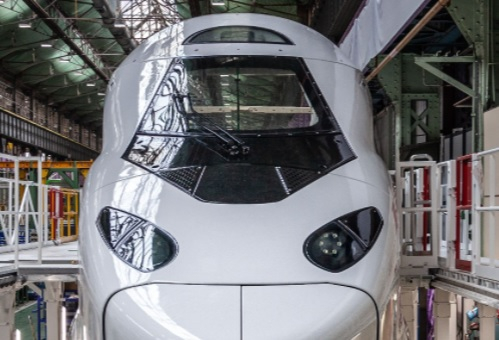 The first images of the new ‘revolutionary’ TGV power cars – or the ‘nose’ of the train – have been released by manufacturers Alstom from its factory in northeast France.

The new TGVs, dubbed ‘TGV M’ are set to begin operations in 2024, ready for the Olympic Games in Paris.

This week Alstom released the first images of the power cars of the new trains, from its factory in Belfort (Bourgogne-Franche-Comté). The modern, white design includes curved edges, and a large windscreen.

Jean-Baptiste Eyméoud, president of Alstom France, told the AFP: “We worked on the aerodynamics, with a much more streamlined engine.”

This is the only piece of the design to have been revealed for now, with everything else – including the interior – still “confidential” for the moment, the company said.

A new face for a new train: Today, @GroupeSNCF Voyageurs and Alstom unveiled the new power car for the #TGVM. Discover the "nose" and the features of this new environmental, energy-efficient, 100% online and 100% French #highspeed train:https://t.co/u9rKiC12Fs #mobilitybynature pic.twitter.com/FSBrBijI4v

They will also have capacity to carry 20% more passengers than current TGVs, with room for 740 people on board. The new trains will also have on-board Wi-Fi and 5G coverage.

The trains will be ‘modular’, and enable their configuration to be changed easily, including making the train shorter, changing the placement of the bar, or the configuration of the seats inside.

Alstom said: “We have not yet completely figured out the delivery speed.” The company has requested that the deliveries be extended to 2031, to save money due to the impact of the pandemic.

By 2031, once all deliveries have been completed, the new TGV M models will make up a third of high-speed trains used in France and beyond.

Christophe Fanichet, CEO of SNCF Voyageurs, said: “We are planning for this TGV to be able to travel across Europe.” It comes as SNCF recently launched its low-cost TGV Ouigo service in Spain, in direct competition with national firm Renfe.