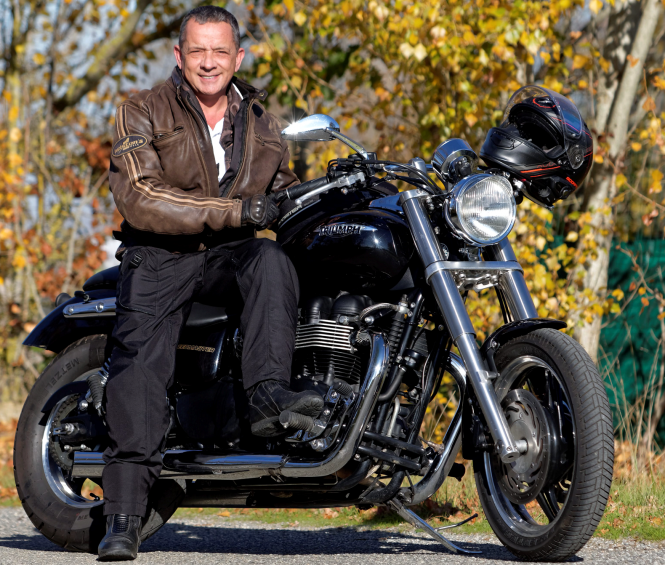 'Lying in hospital, in pain, I wondered why we did not have the same protection for our legs and lower bodies as we have for our heads and upper bodies,' Xavier Bouquillard de Milleret tells Connexion
By Connexion journalist

Airbag over-trousers designed to protect the legs of motorcyclists in crashes are being tested by regulatory bodies, with a plan to put them on sale this year.

The trousers are aimed at reducing the risk of broken legs and were dreamt up by a former jet pilot.

While he was lying in bed with bones in his leg smashed in 17 places after an accident in 2016, he remembered the pressure-suit trousers fighter pilots wear to help them keep conscious during high G-force manoeuvres.

They blow up tight and stop blood rushing from the head to the feet.

“Lying in hospital, in pain, I wondered why we did not have the same protection for our legs and lower bodies as we have for our heads and upper bodies,” Xavier Bouquillard de Milleret told The Connexion.

“Then, when I got home and was hobbling about, I remembered the pressure-suit trousers from my flight training 30 years ago and thought I would work on that.”

The first models to go on sale, at a price of around €400, work with a leash clipped to the motorcycle.

If the driver is thrown from the bike, the airbag mechanism, using compressed air, triggers in milliseconds.

Air cartridges can be easily replaced in case of accidental triggers when bikers forget to unclip the leash.

“In my accident, a car where the handbrake was not put on rolled backwards into my path and, although I was not going fast, it knocked me off the bike and on to a kerbside, which smashed my leg,” said Mr Bouquillard de Milleret, from Toulouse.

“If I had been wearing the airbag trousers, I am sure I would not have been so badly hurt, or not hurt at all.”

They are made of waterproof protective anti-abrasion material and include knee pads and standard hip pads, as well as the airbags. When not in use, they fold down to fit inside a motorcycle helmet.

Mr Bouquillard de Milleret, who became a financial lawyer specialising in defending companies in chambre de commerce hearings after leaving the air force, raised money from investors to bring his invention to market, including using the crowdsourcing site KissKissBankBank, where investors can get discounts if they pre-order the trousers.

The company he set up to make and market the invention is called CX Air Dynamics and the trousers will be on sale from its website. “The interest from all over the world has been tremendous.

“Between 60% and 80% of the injuries suffered by bikers are to the legs, and they can be life-changing. Bikers see the usefulness of the airbag trousers straightaway.”

A second version of the trousers, which works with an electronic trigger similar to those used in cars, is in development and should be ready next year if all goes well.

In spite of his accident, Mr Bouquillard de Milleret still rides. “The accident obviously made me think about stopping – it is dangerous,” he said.

“But the freedom you have on a bike and the pleasure of riding one proved to be too strong and I now ride one whenever I can – in fact, after the lockdowns, I ride more than before to enjoy the taste of freedom.”

Airbag waistcoats, which protect the thorax of motorcyclists in accidents, have been sold in France since 2008.