Cutting off Russian gas: What is France’s view and what consequences?

France gets less than 20% of its gas from Russia. Other EU countries rely on Russia much more Pic: AlexLMX / Shutterstock

A debate on the EU ending its use of Russian gas is “legitimate,” France’s government spokesman Gabriel Attal said this morning (March 8), adding that the option should stay on the table.

He said, though, that with France accessing less than 20% of its gas from Russia, it is in a better position to say this than other EU countries, such as Germany (around 55%) or Finland (close to 100%).

He said that cutting off Russian gas usage “scares [some] European countries”, who, unlike France, get most of their gas from Russia.

“But a few weeks ago, we thought that the measures that we have already taken - meaning financial sanctions - would be impossible,” he said.

Mr Attal’s comments are in response to Russia’s invasion of Ukraine on February 24. The UN has recorded 406 deaths and 801 injuries among Ukraine’s civilian population.

“We need to take as many sanctions as possible. Everything is on the table,” Mr Attal told France Inter.

The European Commission is set to lay out proposals on how to reduce EU dependency on Russian gas in a press conference this afternoon at around 15:30.

EU Green Deal chief Frans Timmermans said the bloc could cut Russian gas imports by two-thirds within the next year.

In order to do this, member states would need to significantly accelerate the rollout of renewable energy and diversify sources of gas imports.

Gazprom, the Russian state-owned group, supplies more than 40% of Europe's gas imports and more than a quarter of its annual consumption.

Germany has said that it supported tough measures against Russia, but that the gas it supplied remains essential to Europe.

“Just if tomorrow the lights go out in Germany and in Europe, it doesn't mean that the tanks will stop. If that were the case, we would do it immediately,” she said.

Russia’s deputy prime minister Alexander Novak said the country would be prepared to cut Europe off from its supply of gas through the Nord Stream 1 pipeline.

“We have not taken that decision yet,” he said yesterday (March 7).

“It will have no winners. Although European politicians continue to push us toward it with their statements and accusations against Russia.”

Could France manage without Russian gas?

The CEO of French utility company Engie, Catherine MacGregor, said that in the “extreme scenario” that France and/or the EU cuts off Russian gas supplies, there would be “very big consequences”.

This would first affect energy prices, with the increase in costs reaching consumers from next winter.

“The real problem would be topping up France’s energy reserves in the spring and summer, in preparation for the winter this year,” she said.

France’s reserves were 34% full at the end of February, she said. It means that if there was a short-term problem, France would manage until summer, but if the issues of supply endured, it would “be more complicated”, she said.

It is not known precisely how much an individual’s energy bill would go up if France ended its use of Russian gas.

France’s government could also step in to either limit the increases or to provide financial support to households in need.

The government is reported to be considering a €24billion-plan to counter the effects of increasing energy prices, Les Echos reported yesterday (March 7). 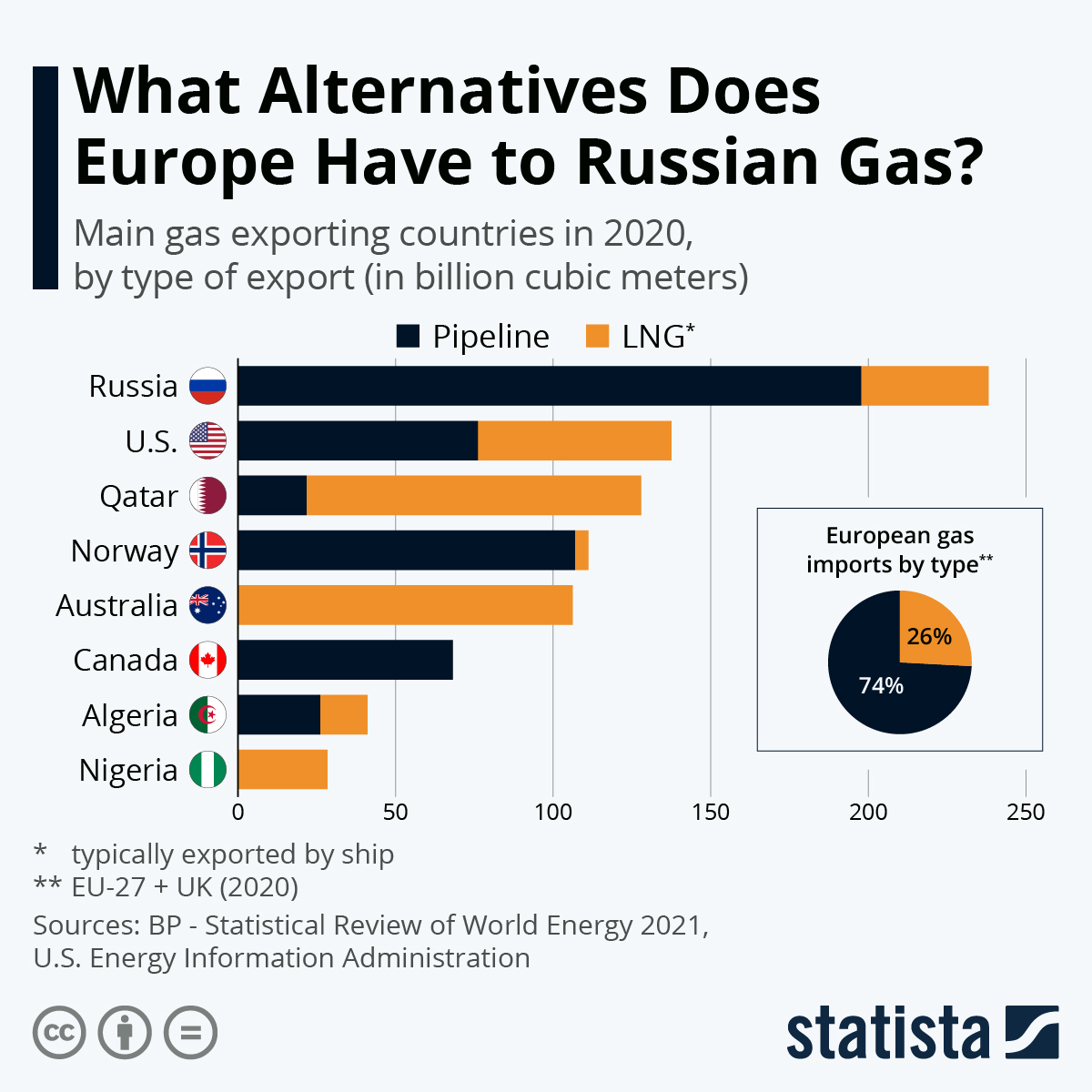 You will find more infographics at Statista

What effect is the war having on the average person in France?

Fuel prices are going to increase by around 10 euro cents in the next week, Michel-Edouard Leclerc, chairman of the strategic committee of hypermarket company E.Leclerc, said yesterday in an interview with Franceinfo.

This will generally push prices over the €2 per litre mark. However, Mr Leclerc doubts prices will rise to €2.50, saying the government is likely to intervene before that point.

He said that the war could affect food prices, particularly for cereals - a large proportion of cereal production takes place in Ukraine and Russia. However, that impact is not expected to hit consumers until next summer.

Food prices in general are likely to still rise in the next two months, with the country in a period of inflation. This is linked to coronavirus, global supply chain issues and a law offering better compensation to farmers, Mr Leclerc said.

Read more: Inflation in France: what is under review to help households?

Read more: Inflation in France set to reach 3%: Tips for saving on prices

One item the price increases will not hit are Leclerc’s controversial 29 centime baguettes.

Mr Leclerc said that his “obsession” is to moderate inflation and fight against rising prices.

What effect would cutting off the gas have on Russia?

“Every day, we finance Putin’s war,” he wrote on Twitter, calling for an end to hydrocarbon imports.

Gazprom could lose more than $200million in revenue per day if it stopped supplying European countries, Le Figaro reported.

It could also lead to other countries ending their partnership with Gazprom, which would hurt the company further.

Ukraine war: How French companies with Russian links may be affected

Resident or second-home owner in France?
Benefit from our daily digest of headlines and how-to's to help you make the most of life in France
By joining the newsletter, you agree to our Terms & Conditions and Privacy Policy
1
MAP: How to see where wildfires are in France in real time