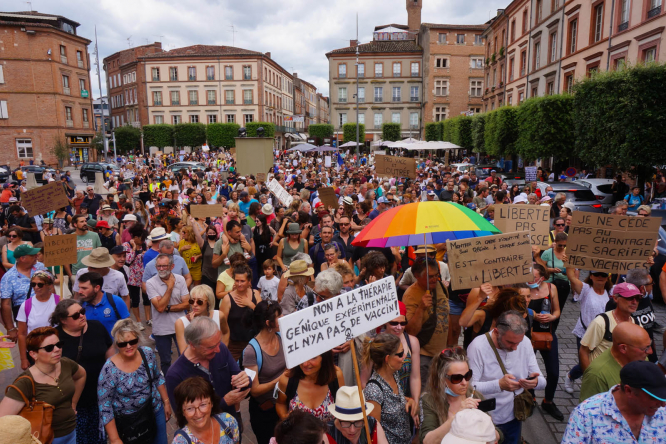 'Everybody seems to have an opinion about how best to fight a killer virus, and there are disgruntled voices everywhere' says Nabila Ramdani Pic: S. Pech / Shutterstock

A brave new world created by a health emergency inevitably comes with enormous angst. Many of the social changes being forced by the global coronavirus pandemic are certainly already causing widespread dissent.

Everybody seems to have an opinion about how best to fight a killer virus, and there are disgruntled voices everywhere.

They range from anti-vaxxers protesting (pictured) to those who accuse politicians of turning the crisis into one long profit party for their cronies in the private sector.

What is far more disturbing, however, is the criminality that is now accompanying the chaos.

Testing firms in Britain enabled by a Conservative government are charging extortionate sums, while failing to provide honest results.

Investigators found one massively busy firm in Halifax, West Yorkshire, simply dumping thousands of returned test kits before issuing negative certificates. The clients get the documentation they need to go abroad, or to get out of isolation when they return home, while the company makes millions.

In France, the situation is even more dire.

Registered nurses have been caught pretending to vaccinate people against Covid for €300 a time. This allowed them to get the passes that are now essential for travelling, or soon for entering any kind of leisure establishment, whether a café, restaurant, or concert hall, without actually being vaccinated.

As cases of the Delta variant rocketed over the summer, low-paid health service staff were making more than €4,000 a month in vaccination centres plagued by corruption. Shocking cases were not just urban myths – Le Parisien newspaper posted a video of a nurse miming a jab on someone for cash. She then received and deposited the payment in a drawer normally used for syringes.

The hundreds of thousands of anti-vaxxers in France might naturally be first in line for such a service, but so too are those who have not been organised enough to sort out a sensible vaccination schedule. Rather than allowing months for two jabs and for the medicine to settle into the body they pay for a quick scam. Young people heading on holiday at the beginning of August were particularly keen to get fake paperwork in order as swiftly as possible, police said.

Astonishingly, staff at clinics, hospitals and pharmacies are among those involved in this black market as purchasers, as well as providers.

They face huge fines if they are not fully vaccinated by September, and there is compelling evidence that those who do not want to be injected are also paying for the fake certificates.

Arrests are being made daily, and those found guilty of assisting in the trafficking of forged official documents risk three years in prison and a €45,000 fine.

This still does not seem to have provided much of a deterrent.

A pharmacist working in a vaccination centre in the Paris suburb of l’Haÿ-les-roses was in July arrested and indicted for “use of forgery and aggravated money laundering”. She is suspected of selling up to a hundred false vaccination certificates. Six others were arrested in Lyon in similar circumstances, while there have been reports of fake passes being offered on Riviera beaches for up to €1,000 each.

Beyond the unsettling sight of health workers in criminal courts, the repercussions of this kind of deceit are enormous. They raise the prospect of an entire system, designed to protect society, being undermined by fraud. Political leaders have joined with scientists in putting vaccination passes at the centre of their anti-Covid-19 strategy. If such documents can no longer be trusted, and are merely used as a get-rich-quick scheme for those paid to care for people, then the unpredictable new tomorrow will be even bleaker than imagined.

'Listen to the victims who dare to report domestic violence'

Artisan soap maker: 'After six years, it still gives me a thrill’
22 October 2021
More from Opinion
More from Connexion
Get news, views and information from France
Join the newsletter
Subscribe to The Connexion