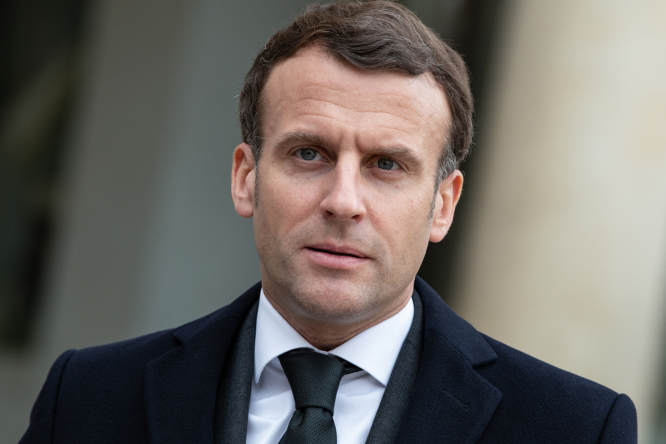 'Throwing his toys out of the pram was a foolish way for Macron to counter Aukus' writes Simon Heffer Pic: Frederic Legrand - COMEO / Shutterstock

No serious country likes to be humiliated at the best of times – though Britain, perhaps, has become so used to flagellating itself since the loss of empire that it takes reversals in its stride.

For France, with a very different 20th century from Britain’s, humiliation is not merely wretched, but provokes wrath.

France was thrice invaded by Germans in 70 years. The last time it had to rely on the Americans, the British and Commonwealth troops to liberate it, whatever Charles de Gaulle said to the contrary.

The 77 years since liberation have been about rebuilding French self-respect and (thanks not least to de Gaulle) the country has generally restored its international reputation.

France has usually enjoyed a high regard from America in the post- War period, and (like Britain) has used its American alliance to pretend to global power, especially since rejoining Nato.

'Any diplomatic move by America disobliging France, therefore, is sure to be painful, just, indeed, as it would be for Britain'

This was not good timing for President Macron. He is a little over six months from the first round of the presidential election, and his party has the most fragile existence. Indeed, in the recent regional elections it was crushed.

There were already signs, before America, Britain and Australia concluded the Aukus pact (and Australia cancelled a massive order for France to build it some submarines), that Mr Macron was becoming anxious.

The initially slow roll-out of the Covid vaccine programme challenged his competence. Meanwhile, a breakdown in law and order in some French cities – notably Marseille – had him reaching for a wallet that Covid had already emptied, to promise more money for the police: money that will have to be printed or borrowed while France’s economy is still in shock.

'To see France undermined as a serious world power hurt Mr Macron personally: as his response to the slight immediately made clear'

The word in Britain is that a main reason why America did not cut France into the discussions about the new pact was that President Biden and his advisors do not trust Mr Macron’s attitude to the Chinese.

To Mr Biden (and it is perhaps the only thing he has in common with his unlamented predecessor, Donald Trump), China is in every respect the greatest threat to world order.

Australia, to China’s south and very much in what has become the country’s sphere of influence, wants an alliance with America to help shore up its defences against any threat China poses.

And Britain already shares some nuclear secrets and technology with America, has close ties with Australia (whose mother country it is) going back nearly 250 years, and the present British government will do more or less anything to boost its ‘global’ credentials post-Brexit.

France itself has interests, current and historic, in south-east Asia and the South Pacific, and an estimated two million citizens in the region, in two territories.

That, perhaps, was Mr Macron’s best reason for being so upset.

The second best was losing a valuable arms contract when the creation of jobs and boosting his economy is a vital part of the promises he must offer during his election campaign.

But what appears to have sparked his outrage most is an almost blind resentment of Britain.

Diplomatic successes such as this were deemed impossible after the United Kingdom repudiated the European Union – especially one with a huge arms contract potentially attached to it – and particularly a success that suggested Britain would thrive at France’s expense.

It contradicts the entire European vision Mr Macron espouses, and for which he intends to make France the figurehead, and which he hopes to lead once Angela Merkel leaves political life (though if he cannot win the election, his leadership of Europe might be distressingly brief).

For all the difficulties Mr Macron has had in the last four and a half years, he has shown a safe pair of hands more often than not. He has lacked the blistering incompetence of President Hollande before him, and the potential for sleaze and dishonesty of presidents Sarkozy and Chirac before that.

However, his response to being cut out of the Aukus pact suggested panic and foolishness.

It was an over-reaction to recall France’s ambassadors from America and Australia, something an advanced country usually only does when responding to an act of tyranny or a banana republic.

It was a calculated insult not to recall the ambassador from London, an indication of what a pointless country Mr Macron currently thinks Britain is.

On the international stage, Britain is represented by a prime minister who likes to act as a clown, is flippant and has a low personal reputation: he certainly lacks Mr Macron’s sense of dignity.

It must gall Mr Macron to be thwarted by such a figure, but it is not good for France for him to show his disgust in the way he has.

Once the toys had been picked up from around the pram, Mr Macron and Mr Biden soon made an attempt to be civil to each other: Mr Macron knows he cannot go into his election with America and France not on speaking terms.

He clearly regards Britain as a different matter, and Boris Johnson’s own overtures to him seemed less welcome, perhaps because of their apparent insincerity.

But what must worry Mr Macron more than anything is that rather too many in his own country, starting with populist opponents such as Marine Le Pen and Eric Zemmour, feel that France has become a less important force in the world during his presidency.

Whatever Mr Macron can achieve at home, registering a serious diplomatic triumph between now and next April with countries that matter would help him enormously.

On the other hand, any other international setback could prove fatal.

Simon Heffer: ‘Efforts to curb France’s anti-Semitism is not working’