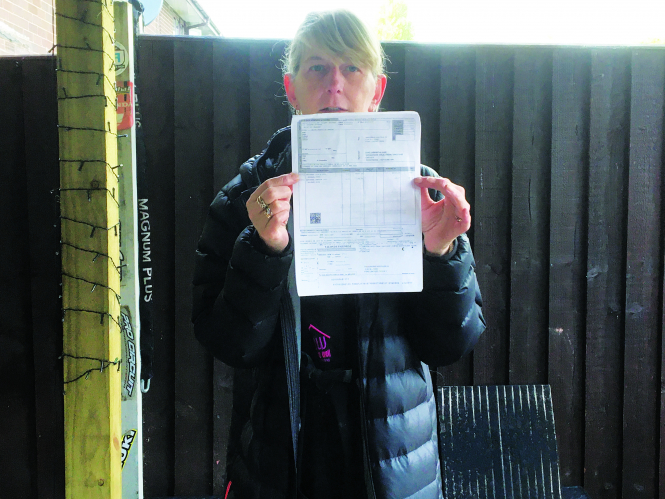 Samantha Dyke has launched an appeal to overturn the bill Pic: Picture courtesy of Samantha Dyke

A British woman living in the UK has received a court order (shared with her sister) to pay €100,000 in care home fees for her father in France. She has not had any contact with him since she was two years old.

Samantha Dyke, 53, a working mother from Crewe, Cheshire, who has never lived in France and who does not speak French, says she has been “bombarded” with bills for her father’s care costs for over a year.

“He’s a stranger to me: I don’t know him as my dad. He’s never provided a thing for me or my sister.”

Ms Dyke’s mother divorced her father in 1977, at which point she said he had already been out of their lives for seven years.

She has no contact with him and knows nothing of his situation, apart from the fact that he moved to France with his second wife and now has dementia and is living in Haute-Vienne.

“I’ve just been getting bills, bills, bills, and then my sister and I received one for over €100,000 to be paid straight away,” she said.

“I was taken to court by the care home in my absence earlier [at hearings in March and May] and now have a court judgment demanding we both pay about €50,000.

“I did send a letter to court and others explaining [in English] that I did not really know this man but they took no notice.”

She said they have also been told to pay around €600/month each towards their father’s fees for the rest of his life. She does not know how the home found her details.

Why is this happening?

Anyone with elderly parents or grandparents living in France can be subject to demands from French care homes to pay for their upkeep. It relates to the obligation alimentaire laws, under which people are responsible for their descendants or forebears if they are in need.

Article 205 of the Code Civil says: “Children owe sustenance to their father and mother, or to other forebears who are in need.” This means that a daughter should help her father to pay bills such as medical costs and care home fees.

If these funds are not provided voluntarily then care homes may seek to require a child to pay. If they do not do so, a family affairs judge will be asked to rule on the issue, taking into account the extent of the parent’s need and the ability of the child to provide the funds.

If a parent has been irresponsible with money or failed to work through idleness, the court might not require children to pay, as their need must be “involuntary”.

Father’s UK pension is not enough

Ms Dyke says her father has a UK pension, but it does not cover all of his costs, so the law judges him to be “in need”.

However, French law states that a judge can exempt a child from providing all or part of the funds if their parent has seriously neglected their own obligations towards them, for example by abandoning them.

Ms Dyke is now seeking to appeal against her court order on these grounds and says she has found an avocat in France who can help. She is now having to get family statements about her situation translated into French to back up the appeal.

She said she has been threatened by the home with action to force her to sell her house, if necessary.

“I’ve worked hard all my life to buy a house and I’m now worried that they’re going to come and take it,” she said.

Retired British solicitor and honorary avocat Gérard Barron told The Connexion that the obligation alimentaire does leave children in the UK liable, though it is uncertain if English courts would enforce the French judgment, especially since Brexit stopped reciprocal recognition of judgments.

However, he said the first action is to defend oneself in court, with the father’s failure to provide for her being a suitable argument.

If the appeal is unsuccessful, he said, the home would have to apply to the English courts for enforcement, in which case Ms Dyke could mount a defence again in the English courts, relying on “common and equity law arguments as to the fairness of the judgment”.

However, doing this “in the uncertain post-Brexit legal environment” would be “much more costly than an appeal in France”.