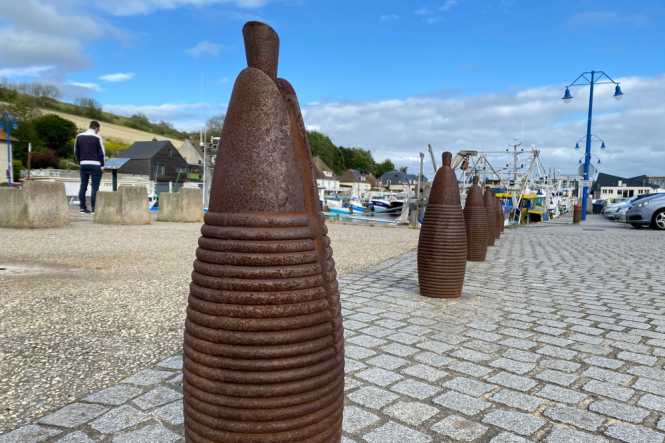 Bombs from World War Two on display in the town of Port-en-Bessin-Huppain (Calvados). There are thought to be still thousands of undiscovered bombs in France left from the war Pic: Krzysztof Pazdalski / Shutterstock

A 213kg British bomb dating from World War Two was recently defused in a town in Calvados, Normandy, after being discovered during building work.

There are thought to be still thousands of bombs in France and discoveries of them in Normandy are reasonably common.

The town where this latest bomb was discovered, Villers-Bocage, was heavily bombed by the Allies during the war.

This latest bomb was secured by services from the Caen demining centre, who removed its ignition system.

A security perimeter was set up and about 20 inhabitants living in the nearby area were evacuated because of the risk.

The operation went without incident and they were able to return to their homes at the end of the morning. Traffic was also restricted around the area.

Normandy is still littered with bombs from World War Two.

A 230 kg bomb was found just last month at a work site in Le Havre (Seine-Maritime).

In December 2019, the clearance of another device of the same size in Vire (Calvados) required the evacuation of 300 people.

And in the Channel, bombs are also sometimes fished out by trawlers.

According to some experts, it will take another 100 years to get rid of World War Two munitions along France’s northern coastline.

The British and American Allies systematically bombed the main railway lines, industrial sites and strategic infrastructures in France during the war in efforts to liberate the country from Nazi occupation.

In recent years, bombs have been found in Saint Nazaire (Loire-Atlantique) in July 2020, in Limoges (Haute-Vienne) in January 2019, in Bourges (Cher) in January 2021, and in Saint-Ay (Loiret) in June 2020. This last bomb was German, made of concrete and weighed 1 tonne, but was not loaded with explosives.

Etienne Berthelin, head of the Versailles demining centre said that it is important people always keep in mind that these bombs can be very dangerous.

"If you come across them while hiking, swimming or even in your grandparents' attic, report it to authorities," he told France Bleu.

The area around Paris is also littered with bombs from the war.

The expansion of the RER E rail line has led to several being discovered around Mantes-la-Jolie (Yvelines).

“Let's just say that if you dig down four or five metres, there's a chance of finding some," an amateur historian, interviewed by Le Parisien in January, said when yet another munition was discovered.

The Versailles demining services received 750 requests for intervention in their area in 2020. They deactivated 25 tonnes of munitions.

The presence of an underground explosive belt in France led the government to create a special task force in 1953.

Major security measures are occasionally required, depending on the danger of the demining operation.

This was the case in July this year when a 500kg bomb was discovered near Saint-Etienne (Loire). Some 130 police officers were deployed to assist, along with emergency services, civil protection associations and a drone, Le Figaro reported.

Around 1,800 local residents were briefly evacuated from the area.

It is not known how many bombs are scattered around France.

However, Jean-Yves Siffointe, head of the centre interdépartemental du déminage de Versailles, said he believes it will take several more centuries to clear them all.

“Knowing approximately the number of bombs dropped during the war, we still have six to seven centuries of work ahead of us," he told Le Parisien.