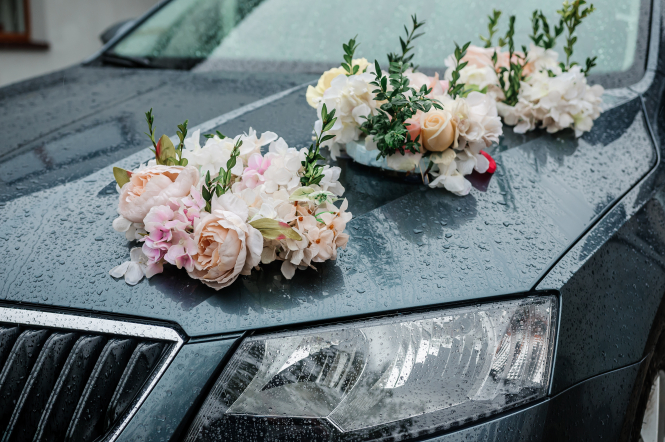 A wedding procession made up of around 20 cars was hit with fines totalling €8,370 for breaking the highway code as it passed through Romans-dur-Isère, Drôme, at 15:00 last Saturday (September 25).

The drivers in the procession have had a combined 108 points removed from their licences.

Safety cameras caught most of the incidents, issuing a record-breaking 62 vidéo-verbalisation tickets, the highest number issued since the cameras were installed in the town in 2016.

However, police on motorbikes intercepted an unregistered motocross vehicle leading the procession.

Local authorities issued the following reminder: “When engaged couples ask for a civil ceremony at the mairie, they sign an agreement which commits them and their families to respecting public peace and security rules, inside and outside the town hall.

“This [also] implies respecting the highway code during the wedding procession.”

Multiple similar incidents have happened in the past few months.

In Val d'Oise, violence broke out between wedding guests and police on September 25, after members of the wedding procession used their cars to block the A16 motorway and D44 road.

When they tried to block a third road, police attempted to redirect the cars and a clash ensued, with wedding guests throwing chairs, ashtrays, and bins from restaurant terraces, prompting police to use tear gas to disperse the fray.

In Oise, on September 19, a wedding procession was fined €9,585 and issued 71 tickets for breaking the highway code, again breaking a record for the highest number issued in a day in the town of Laigneville.

In Nord, on September 4, police issued 30 fines to a wedding procession in Valenciennes, for infractions including speeding, swerving, sitting on car doors, and not wearing seatbelts.

The town has specific road rules in place on Saturdays for five years, in a bid to discourage misbehaviour by drivers in wedding processions.

Also in Nord, one car from a marriage procession ended up in a police chase on June 19 after a driver in an orange Lamborghini blocked the A21 road by doing skids and tricks while other members of the procession cheered from their cars.

When police arrived the driver fled the scene with police in pursuit, eventually crashing the car.

Nobody was injured in the incident. The driver, 23, was arrested and charged with multiple crimes including speeding, refusing to comply with police orders, and driving without a valid licence.

French marriage processions are known for using their car horns to make noise as they pass, in an expression of joy.

However, the French highway code specifies when the car horn can be used, and doing so is banned in urban areas except in case of immediate danger.

Outside of urban spaces, the rules are broader, with use of the horn allowed to give warnings to other drivers such as signalling the presence of another car.

Even when horns are allowed to be used, the highway code specifies that the sound produced should not be longer than necessary.

While horns are not supposed to be used to add to celebrations, this usage is usually tolerated by police in practice, within reason.

However, police can issue fines of €35 for misuse of a car horn, and €68 for use of a horn that does not fit regulations.

The rise of street video surveillance in France

France is a world leader in street surveillance technology, with controversial facial recognition cameras being used by security forces in some instances, such as at large events.

Cameras have also been used to identify driving transgressions for more than 10 years, with the cities of Nice and Lille particularly early proponents of the technology.

In 2008, the Var town of Draguignan became the first in France to use camera evidence to fine motorists for double-parking in the town centre.

Cannes followed suit a year later, and Nice in 2010. Since then, numerous local authorities have joined the hi-tech trend - including Istres, Nîmes, Chartres, Aix-en-Provence, Marseille and Paris.

A list of towns and cities that use ‘vidéo verbalisation’ (issuing fines due to video surveillance) can be found here on the video-verbailisation.fr website.