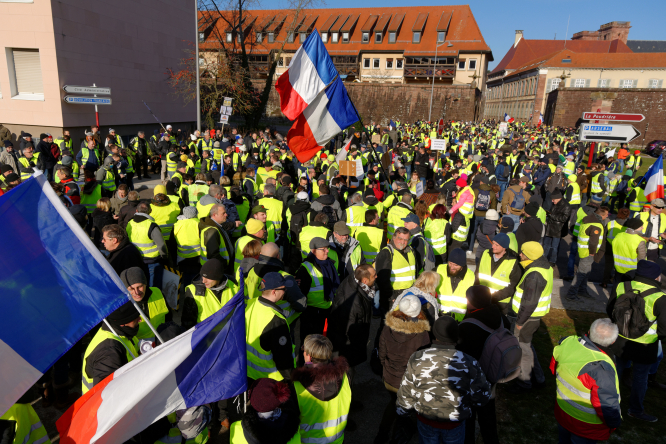 The government wanted to use real-time facial recognition tech during the gilets jaunes protest, one civil liberties group has said Pic: Photo: Thomas Bresson / CC BY 4.0

MPs may have blocked some of the government’s more extreme attempts to widen police use of facial recognition but surveillance technology is already widely deployed by security forces in France.

Its critics say its use is likely to be expanded.

France is a world leader in the technology, and French biometrics firm Idemia recently beat nearly 300 contenders to come first in a US government agency’s competition for the best algorithm to identify photos of individuals.

That only serves to fuel the fears of groups such as the online civil liberties organisation La Quadrature du Net.

It is worried that the government will want to put such tech tools to use in forthcoming major events due to be held in France – Covid-19 permitting – leading up to the Rugby World Cup in 2023 or the Paris Olympics in 2024.

Arthur Messaud, a lawyer with La Quadrature du Net, said: “The government will want to show off its tech tools to the world in the hope that it can sell them abroad.”

Facial recognition is already used by police in France, and its opponents say that it will be difficult to hold back the tide of technology.

Since 2012, police have been allowed to store pictures of people arrested or suspected or convicted of crimes in a database and use these – along with facial recognition software – in later investigations.

When Chechen-born Khamzat Azimov was shot dead by police in Paris in 2018 after stabbing one person to death in the street and injuring four others, police were able to identify him by taking his picture and running it through a database.

Such use of the technology is seen by its proponents as an argument for its broader use, but there are many who are worried that there is no proper oversight of how the millions of photos in the hands of the security forces are used.

The “global security” law, which sparked a series of street protests, was passed in mid-April, allowing drones to be used by police in certain circumstances at protests and elsewhere.

MPs did not allow it to authorise drones to stream images back to police stations for use in real time to identify protesters.

A report by the National Assembly in 2018 said police had eight million photos of people in their TAJ (traitement d’antécédents judiciaires) database.

Another parliamentary report said officers had used the database for facial recognition 375,747 times in 2019.

Using facial recognition clashes with a 2019 French law – that emerged following a European Union directive – that says a person’s biometric data can only be used without the person’s consent in situations of “absolute necessity”.

La Quadrature du Net has used that idea to take a case to the Conseil d’Etat, France’s highest administrative court, to try to stop the police’s widespread use of facial recognition.

Meanwhile, experiments in the use of the technology continue across France, notably in Nice during the 2019 Carnival when a full-scale test was carried out on the city’s streets during the festival.

The CNIL, France’s data protection agency, is keeping a close eye on these tests, which some see as heralding an inevitable rollout of the technology.

“It’s not progress,” said Mr Messaud, who claimed the government was keen to use real-time facial recognition during the gilets jaunes protests.

1 day ago
4
Shortages of goods in France: What is expected in the months to come?