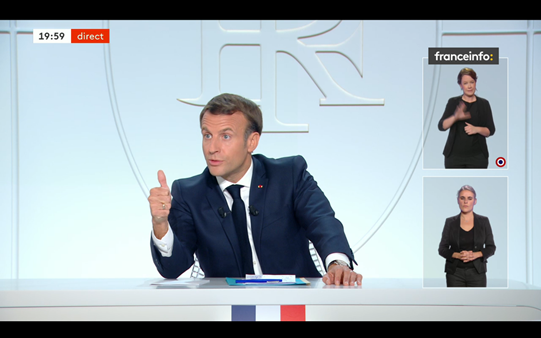 French President Emmanuel Macron make some big announcements last night during a live TV interview, including night-time curfews that will come into effect in nine French cities from Saturday.

His appearance came shortly after the government announced that France will be again entering into a state of health emergency, also starting on Saturday.

France had previously put in place a nationwide state of health emergency to combat Covid-19, which lasted between March 24 until July 10, and led to the introduction of lockdown measures around the country.

Here are the key points to retain from Mr Macron’s speech, which aired on TF1 and France 2 on Wednesday October 14.

"It would be disproportionate to re-confine the country," the president said. Nevertheless, "our objective must be to reduce private encounters, which are the most dangerous."

A curfew between 21:00 and 06:00 will therefore apply from Saturday October 17, in the Ile-de-France region, Grenoble, Lille, Lyon, Aix-Marseille, Montpellier, Rouen, Saint-Etienne and Toulouse.

Mr Macron said that the government has the right to impose a curfew for only four weeks, but he intends to ask parliament to extend it until December 1, bringing it to six weeks. "That's the time we think is useful," Mr Macron said.

The curfew will first be enforced starting at 21:00 on Saturday, October 17.

There will be a fine of €135 for anyone caught breaking the rules.

Movement between regions will not be restricted

"There will be no restrictions on public transport", as was the case during the spring lockdown, said Mr Macron.

In addition, "we will not prevent people...from going on holiday," he said, promising that there would be no restriction on travel between regions.

"Asking people to stay at home in flats and not to go on holiday, frankly, would be disproportionate,” he said.

He did advise people who travel to respect barrier gestures (hand-washing, sneezing into elbows, social distancing, etc) and the rules around wearing masks.

Macron invokes the “rule of six”

Mr Macron borrowed a rule from the UK by advising that people in France do not gather in groups of more than six people.

"Let’s try, when we invite friends, not to be more than six at the table, and not more than six in the street either," said Emmanuel Macron.

It is not an official ruling, just advice.

The “rule of six” was introduced in the UK in September.

A return of the 'furlough' system

It will apply to businesses in the following industries: hotels, cafés, restaurants, tourism, events, culture, sport

"I wouldn't say it's a failure; it didn't work," Mr Macron said, referring to the StopCovid application, which sent only 472 warning notifications in five months.

The president therefore called for a redesign of the application, whose new name will be TousAntiCovid, and which will be launched on October 22.

The new version will have the same objective: "To identify, trace and prevent outbreaks of contamination".

It will also provide "information on how the virus circulates where you are" and will have "simple instructions for use".

Mr Macron promised that the country would launch a new testing strategy in the coming weeks.

He mentioned that as part of the strategy, the country would be rolling out rapid antigen Covid-19 tests. You can read about these tests here.

No call to work from home (télétravail)

"We need companies to work...We need to have public services that are open, post offices that are all open…” Mr Macron said.

“We need to have teachers who are in class. We need everyone to be present as much as possible. Instead, we're going to encourage people, for whose jobs it's relevant, to work from home two or three days a week," he said.

So, no official demand for people to work from home, just a suggestion for those who can, to do so at least some of the time.