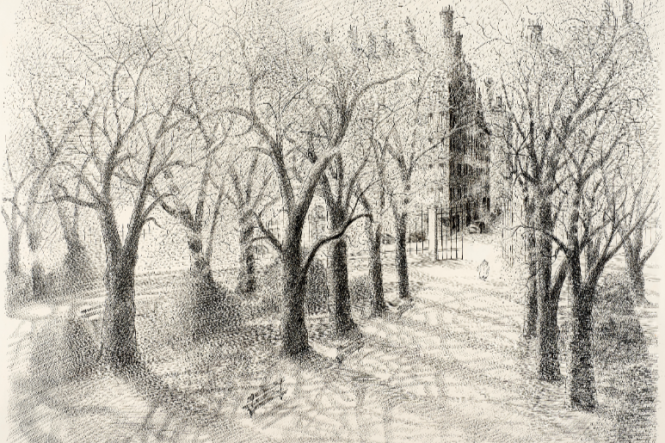 Some 54 pieces of original art by the French cartoonist Jean-Jacques Sempé will be on sale at an auction for the first time tomorrow (June 19).

The artist, known most commonly as Sempé, is famous for illustrating the series of French children’s books Le Petit Nicolas. His work has also featured on over 100 covers of The New Yorker magazine, in Paris Match, Le Figaro, and Le Nouvel Observateur.

The artworks on sale span Sempé’s long career, from the 1960s until today. The collection documents everyday scenes from the artist’s perspective, including depictions of Parisian life, the Jardin du Luxembourg, a bike ride, an outing to the opera or a night bus crossing a Parisian bridge.

Eric Leroy, an art expert and organiser of the sale at Paris-based auction house Artcurial, said the auction was an occasion not to be missed.

“Appearing on the art market for the first time will be an exceptional ensemble of drawings by this poetic genius, full of humour,” he said.

Sempé was born in Bordeaux in 1932 and published his first drawings in the local and then national press in the 1950s. His first collection of cartoons was published in 1962.

He began collaborating with René Goscinny, the creator of the Asterix comic book series, at the end of the 1950s to create the popular series of children’s books Le Petit Nicolas, which depict an idealised version of childhood in 1950s France.

The auction will take place on Saturday (June 19) from 14:30 at Artcurial auction house in Paris.

You can follow the event live on Artcurial’s website here, where you can also make bids for the artworks.