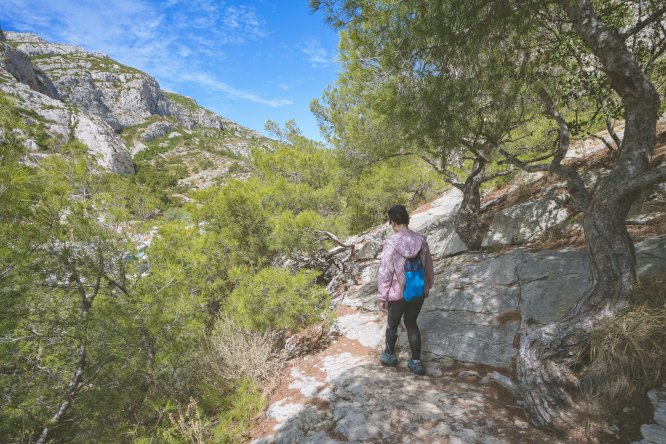 Access may be limited to the popular Calanques national park near Marseille with an online booking system which, if the idea is approved, would be a first for France.

Numbers visiting the national park, which features Mediterranean creeks of clear water, framed by ochre-coloured cliffs, have been steadily increasing and are thought to have reached 3 million last year with some sites having over 2,000 people a day.

Today (Friday, September 3), President Macron will conclude his three-day trip to Marseille with a visit to the national park, accompanied by former Minister for the Ecological and Inclusive Transition, Nicolas Hulot.

If plans go ahead, visitors will have to make reservations through an internet site. If approved it will be the first time that access to a national park has been restricted in France.

Park authorities fear damage is being done to both plants, and the narrow rocky paths leading down to the creeks, by the number of visitors.

“Having too many visitors is the biggest risk to the park,” Parc National des Calanques president Didier Réault, said in a Facebook video.

“It is a risk for the nature and biodiversity which is at the heart of the Parc National.”

He said restrictions might come in during 2022. At the moment, there are no plans to charge to visit the Calanques.

Reservations - and paying for entry - to national parks is common in other parts of the world like the United States and South Africa.

The Calanques national park covers 8,500 hectares and is spread over the communes of Marseille, Cassis, and La Cioat, and also extends out to sea.

It is rare in being one of a few well known metropolitan national parks, others are found in Sydney, Australia and Rio in Brazil. Around 100 protected species of animals and plants are found in it.

A ban on boats anchoring in popular creeks was introduced this year to protect seagrass which scientists now believe plays an important part in regulating CO2 emissions in the environment.

Last year the Parc national des Calanques said it was starting a “do not visit” campaign to try to limit visitor numbers, with the website pointing out how steep the paths down to the creeks were, and how cold the water is.

This summer access has already been regulated by a government decree which bans people from visiting when there are high winds and dry conditions because of fire risks.

For one of the boat hire and guided tour operators in the Calanques, Bleu Evasion, the new measures will be a continuation of rules introduced this year on water.

“In the short term it is a constraint on our activity which can be annoying, but we accept that some restrictions have to be put in place in the long term or we will not have any business at all if the environment is destroyed,” the manager and co-owner Patrick Biaggini told The Connexion.

“The park authorities have gone out of their way to explain things to us and for me, it is like quotas for fishing - if nothing is done the resource, which in our case are the magnificent Calanques, will eventually disappear.”

Mr Biaggini said the early part of the summer season had resulted in slightly fewer boats visiting the Calanques than normal, possibly because of restrictions on where they can anchor and the number of boats in some areas.

“But for us, demand for tours and boat hire has been very good, in spite of the Covid problems. I do think everyone should see these magnificent natural sites at least once.

“If they are not to be swamped completely though, we now have to have more rules and regulations. Overall it is a positive step for me.”