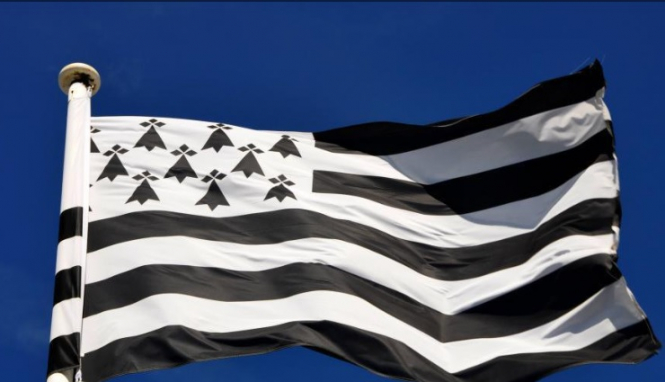 The distinctive, black-and-white flag - named the Gwenn Ha Du - appeared on Twitter on Monday Tuesday 13. It appears automatically when users type the hashtag “#EmojiBZH” - but this is only set to last until February 9.

Now, campaigners - who successfully lobbied for the emoji to appear in the first place - are encouraging users to tweet with the symbol as much as possible, so that online platforms are persuaded to adopt it permanently.

The emoji is currently in testing phase, meaning that Twitter has made it available until February 9, to judge its use and popularity. If it is not judged to be popular enough, it will disappear.

Twitter is the only platform that provides emojis temporarily, making it a good starting point for the campaign, which eventually wants the flag to be available as a permanent icon across other platforms too, and on the official emoji keyboard used by most smartphones.

The final answer will come from the Unicode Consortium, which creates and manages all new emojis worldwide. The next session is set to take place in April.

Regional president Loïg Chesnais-Girard said: “We have 28 days to explode their counters. Brittany people must rally around this emoji, and share it massively, so that Brittany can be heard by the tech companies.”

David Lesvenan, president of Brittany culture association Point BZH (named for the Breton internet domain extension “.bzh”), said: “We have to show these web giants that this emoji has real user potential. Brittany is already the most-mentioned region on Instagram and Twitter, so we have real legitimacy in backing our emoji.

“Our [Unicode] file is on hold for the moment [but] we hope to have our emoji in place in 2021. It’s now vital for the region so that we can be present all over the planet.”

The Breton region is hopeful that its campaign will be successful, after the flag was chosen as the “second-most wanted” emoji by internet users on World Emoji Day 2017. The official emoji keyboard already has separate flags available for the 12 French overseas territories; including Martinique, and Saint Pierre and Miquelon.

The campaign for a Breton flag emoji is not the only campaign to have hit similar headlines in France in recent years. In 2018, a petition for a French Camembert cheese emoji was also started, but with relatively small support compared to that for the Gwenn Ha Du.