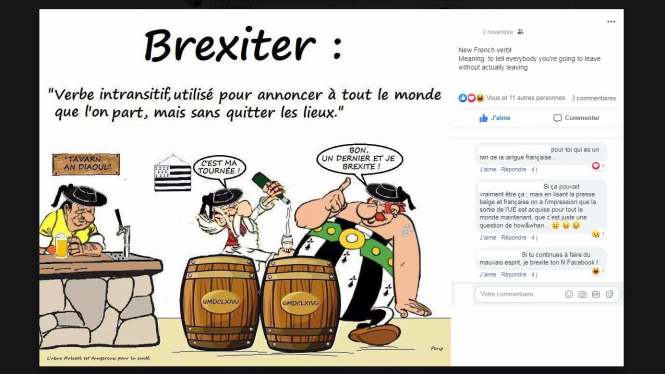 Brexiter, 'a verb used to announce to everyone that you are leaving, but without going anywhere’
By Oliver Rowland

Collins dictionary has revealed its selection of ten words and expressions that have become popular since the Brexit referendum – such as cakeism and Project Fear.

It comes as Connexion has noted some other Brexity linguistic developments including French Wikipedia’s choice of referring to Brexit as ‘le Brexit ou crise du Brexit’ (Brexit or Brexit crisis) and the amusing suggestion of a new verb shown in the image above which one of our team spotted on their Facebook timeline.

It is hardly surprising if a topic which has dominated the headlines for three years has brought with it new vocabulary – including the word ‘Brexit’ itself, which Collins named its word of the year in 2016.

Collins said its new list, which it calls The Brexicon, represents “10 words that Brexit has brought into prominence, for better or worse”.

Collins language consultant Helen Newstead said: "The dictionary has no opinion on Brexit, other than to say it has been quite generous in its gifts to the English language, as well as I am sure inspiring the use of many old-fashioned expletives.”

- Flextension - noun - An informal agreement to extend the time allowed for payment of a debt or completion of a contract, setting a new date that can be altered depending on future events

Connexion notes that French Wikipedia started referring to Brexit as ‘the Brexit crisis’ on April 24, shortly after the negotiated deal had been refused by the UK Parliament three times, the deadline had been put off for a second time and 70 local Conservative associations had called for Prime Minister Theresa May to resign.

The current French page on the subject informs the reader that: “The crisis is liable to last several years without anyone being about to predict how it will end. This crisis has already caused the resignation of the prime minister, Theresa May, and a historically low election score for the Tories in the European elections of 2019.”

Also according to the same page: “This phenomenon of repeatedly putting off, where the matter of leaving is ceaselessly studied without ever being resolved, is described by a new portmanteau word, ‘Brexiternité’ [Brexiternity]’.”

Connexion also liked the suggestion we saw in the cartoon in the image above for a new verb brexiter, 'used to announce to everyone that you are leaving, but without going anywhere’.

In the image the druid Panoramix [Getafix in the English translations] is saying to Obelix, ‘it’s my round’ and Obelix replies ‘ok just one last one and then I’m brexiting’.