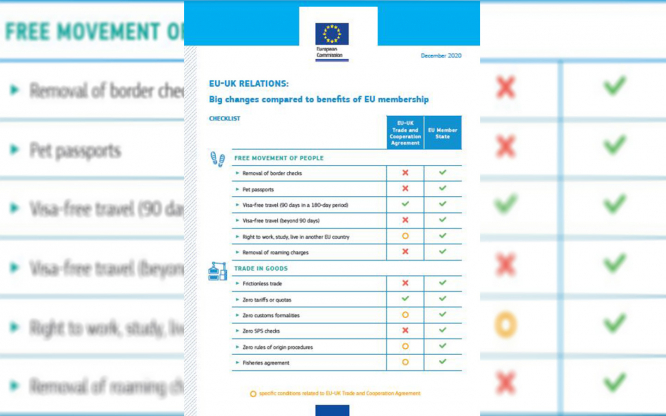 The European Commission has released a 25-point checklist showing how the UK’s relationship with the EU will differ from January 1.

The list is divided into seven categories, such as “free movement of people”, “air transport” and “EU programmes”.

The UK and the EU agreed a trade and cooperation deal on December 24, which sets out the future relationship.

Christopher Chantrey, vice-chairman of the British Community Committee of France, told The Connexion shortly after it was announced that he was relieved but not celebrating.

“If we look at the whole situation we - the British in France and in Europe - are less well-off than we were before the referendum in 2016,” he said.

British Prime Minister Boris Johnson wrote on Twitter that he "welcomed the importance of the UK/EU Agreement as a new starting point for our relationship, between sovereign equals."

To see the EU Commission’s checklist in full, you can go to their website here, and scroll down to the final document.

The Brexit trade deal does include protections for UK pensioners’ and visitors’ healthcare and for pensions.

See some example screenshots of the checklist below.