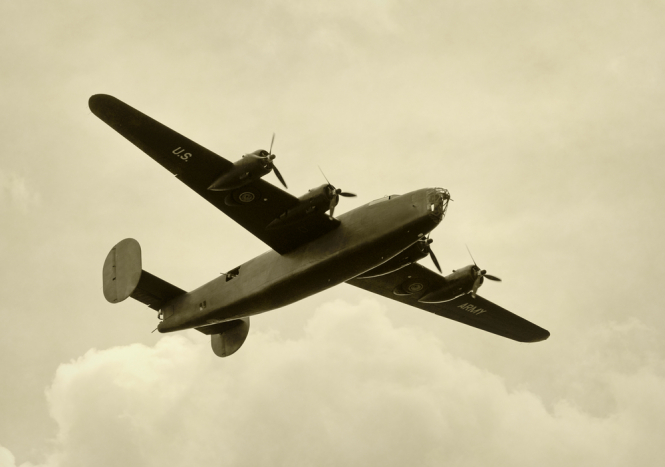 The aviators were flying a US bomber plane that had taken off from an English base when it was shot down over France Pic: Ivan Cholakov / Shutterstock

A team of British archaeologists has descended on a small village in Meurthe-et-Moselle to assist in a dig to recover the remains of two US aviators whose plane crash-landed during World War Two.

For the past two weeks, the 350-inhabitant village of Bainville-aux-Miroirs has been at the centre of an international dig involving British archaeologists contracted by the US government.

The dig is a bid to recover the remains of two US airmen who were reported missing after their plane crashed.

The plane, a US bomber Liberator B-24J, crashed landed in the middle of a field in the French commune in September 1944.

It had departed from a British base and contained military material that was being transported to help the French Resistance, with a final destination near Strasbourg.

It had been flying at low altitude, and reportedly did not take note of a radio transmission asking it if it was an enemy plane or not. This resulted in it being shot at from a US battalion Resistance base in the nearby village of Lebeuville, and it crash-landed.

Only two members of the eight-man crew survived – the pilot, and the radio operator, who managed to jump with parachutes from the aircraft.

The remains of four of the other crew members were later recovered; but the two airmen who had been at the front of the plane have, until now, been stuck inside, as the carcass ended up partly underground.

Since mid-October, more than a dozen archaeologists have been on-site – including staff from the British company Geoscope, as well as volunteers – to recover the remains of these final airmen.

The dig was spearheaded by the Defense POW/MIA Accounting Agency (DPAA), a department of the US Department of Defense dedicated to finding US military personnel who are listed as prisoners of war, or missing in action from designated past conflicts, from countries around the world.

US representatives had already visited Bainville-aux-Miroirs in 2013, to identify the search area for the dig.

Tim Fletcher, the British lead archaeologist at the dig, told BFMTV: “It’s quite difficult. We’re digging up to two metres deep over a 30-metre area, but the ground and the conditions are not ideal. It was good weather for a few days but it’s now been raining for about a week, so the earth is very wet.”

So far, the team has declined to say if the remains of the airmen have been found, with 10 days of the dig still to go.

However, village mayor Brigitte Meyer has said that the collection of discovered items is “quite impressive”. She said: “They are regularly bringing things to light, including containers full of munitions and weapons, but also equipment such as boots and medicine.”

Yet, she said that “time has done its work”, and the “ground has been turned over quite a lot over the years”.

Local newspaper L'Est Républicain reported that the crash had formed a two-metre deep, 20-metre diameter crater in the earth, with villagers at the time reporting that the fire lasted two days. The crater was later filled in and new crops were planted in the field.

The archaeological dig has attracted much interest from the village, with many residents seeing the site as a key part of their area’s wider Resistance history.

Mr Fletcher said: “We have been getting a lot of visitors at the site. The inhabitants that come to see us are very welcoming, and tell us their stories. Some heard about the incident from their parents when they were children.”

The village has invited the team of archaeologists to its traditional November 11 commemoration event, and they are also set to visit the headstone erected in 1997 in memory of the six aviators killed in the accident.