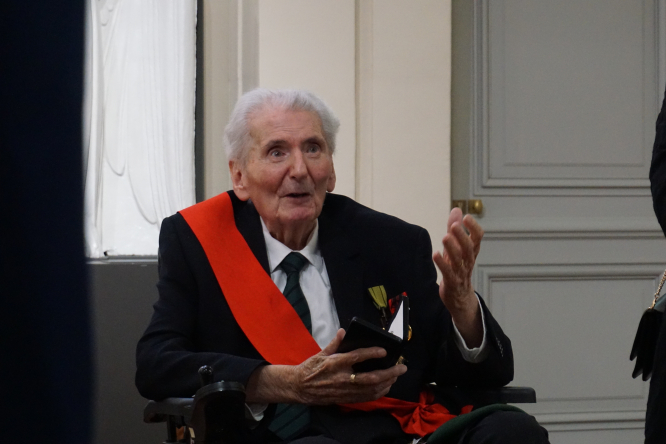 Mr Germain, who dedicated his life to serving France during and after World War Two, has died at the age of 101 Pic: © Ordre de la Libération

Hubert Germain, the last surviving man of General de Gaulle’s World War Two ‘liberation companions’ order, has died at the age of 101. His memorial will be presided over by President Emmanuel Macron.

Mr Germain’s death was confirmed by Army Minister Florence Parly in the Senate yesterday (October 12). She called his participation in France’s liberation an “important moment for our history”.

President Macron will preside over Mr Germain’s memorial ceremony, which is set to take place at the Arc de Triomphe, followed by burial at resistance fighter burial ground Mont Valérien, on November 11.

Before that, Mr Macron is expected to pay tribute to Mr Germain at a ceremony at Les Invalides. The president has described Mr Germain as “a figurehead of Free France” who “embodied a century of freedom”.

In 2020, Mr Germain was made an honorary member of the Order of the British Empire along with three of his fellow liberation companions. UK Prime Minister Boris Johnson said at the time that they embodied the "lasting power and depth of the friendship between our two countries."

She wrote: “He was the last. Hubert Germain embodied eternal France, ardent in battle and eager for freedom. With him goes a generation of committed Frenchmen, for whom a life fully lived was synonymous with a life given. Their testimony is our heritage today.”

Before his death, Mr Germain had become weaker, and rarely left his medical room at the Hôtel des Invalides.

He was a pioneer of General de Gaulle’s Compagnons de la Libération, and was later a minister. He was the last surviving member of the illustrious wartime group.

The Compagnons de la Libération group was formed of 1,038 members, five cities, and 18 military units that were awarded the honour. It was an officially recognised group in France.

The ‘Ordre de la Libération’ medal is France’s second-highest honour, second only to la Légion d’Honneur. It has only rarely been awarded, to those who are recognised for their contribution towards the Resistance.

In English, the order is sometimes known as the ‘Heroes of the Resistance’.

Wartime service and beyond

In June 1940, Mr Germain travelled to London on a Polish soldiers’ boat, departing from Saint-Jean-de-Luz (Pyrénées-Atlantiques).

At the time, he was about to take an exam to enter France’s Naval College, but said: “After five minutes, I asked myself: ‘What am I doing here?’ I got up and told the shocked examiner: ‘I’m going to war’.”

He would later meet General de Gaulle in London, and trained on the old battleship, Courbet.

He often told the story of his meeting with General de Gaulle. “He stopped for a second, looked at me and said: 'I am going to need you.' When you hear that, at the age of 18 during a time of disaster, it is something that moves you deeply," Mr Germain said.

He was later sent to Syria as part of the first division of Free France.

After Syria was taken back under Free France’s control, Mr Germain joined the officers' school in Damascus.

He graduated as a midshipman and soon joined the 1st Free French Brigade before being transferred to the 13th Half-Brigade of the Foreign Legion in February 1942.

In a book of interviews named Espérer pour la France, published in 2020, he said: "Today, I can say that the happiest period of my life was when I joined the Foreign Legion.”

He would later take part in battles at Bir Hakeim in Libya, which helped to win pivotal battles in Al-Alamein in Egypt, which is often credited as ‘turning the tide’ of the war.

Mr Germain was later wounded in battle, but went on to fight in France, and became commander of a French army occupation camp in Germany, before being demobilised in 1946.

He would go on to be awarded the Croix de la Libération by General de Gaulle.

But Mr Germain’s demobilisation was not the end of his life of duty.

In 1953, he became mayor of Saint-Chéron in Essonne, and joined the Army Ministry at the same time. In 1962, he became an MP in Paris, and would later become post and telecommunications minister.

After this stint in government, he became head of la Société française de télédistribution, including taking responsibility for the wire communications network, until his retirement in 1982.

Even in his older years, he took part in many official ceremonies to help memorialise the war and celebrate victories. In 2010, he joined the Council of the Order of the Liberation, and in 2020 became its honorary chancellor.

His last appearance in public was with President Macron, at a ceremony to mark the anniversary of General de Gaulle’s famous Appeal from London on June 18, 1940.

Memories of the French Resistance in south-west France

The story of De Gaulle's 18 June appeal 80 years on