Memories of the French Resistance in south-west France 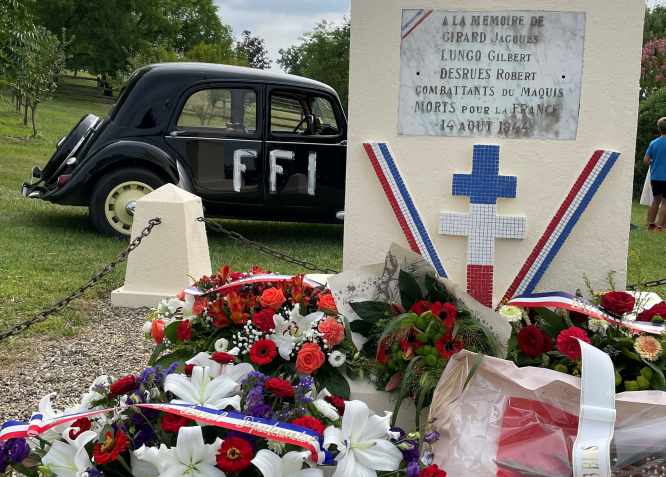 Ben Adams, a recent graduate in French studies from the UK’s University of Reading, grew up in Prayssas, Lot-et-Garonne, whose links with the French Resistance are still – for now – part of living memory. It has just marked the 77th anniversary of a key battle.

In this piece Ben, who moved to the village from the UK aged six, reports on memories told to him by the oldest inhabitants. He told The Connexion he has had a lifelong passion for Second World War history, but only realised the fascinating true story of the nearby war memorial after research for his university course.

In the hamlet of Cornier, just outside the sleepy village of Prayssas in south-west France, there is a memorial with three names on it.

Every year on the weekend nearest to August 14, a contingent of elderly veterans, the mayor, and locals young and old, gather to sing La Marseillaise, lay a wreath, and honour the fallen. This year the occasion marked the 77th year since a battle that decided the village’s fate.

Very few people are alive today who can remember the events that took place here in 1944, and those that are still around to tell the tale, including Armand Cominotto, 96, and a 101-year-old who was present at the skirmish itself, prefer not to speak about it.

One elderly local, however, is more than happy to indulge anyone who asks about her past life.

Nicknamed 'la Dame de Prayssas’, Carmen Cassagne, 92, never shies away from interacting with inquisitive youngsters wanting to hear “what it was like during the war”, especially those wishing to capture the stories of a generation fast fading into the annals of history.

As a girl, she helped the Resistance several times.

On her bicycle, the 14-year-old would deliver secret messages to the commander of the local maquis, a job also done by a young Armand Cominotto who, at Sunday’s memorial service, was recognised for his efforts with an award.

Sadly not present, was Carmen who is now barely able to walk to the bakery two doors from her house.

However she said that every year on the 14th she remembers the events of that sunny August day in 1944, and, in particular, thinks of Gilbert Lungo, from Senegal, one of the three men whose names are followed by the words ‘Mort pour la France’ on the memorial at Cornier.

She said: “Firstly he was the first non-white person I had ever seen in my life, and in those days in this little village that was quite a big deal.

“But more importantly, it is because I was with him during his last few moments, holding his hand and comforting him.

“I feel sorry knowing that he died thousands of miles away from home, defending a place he had never even heard of, because it was the right thing to do”.

After France fell to the Nazis in June 1940, instead of heading back to his home country, Mr Lungo remained in France to carry on the fight.

Throughout the German occupation the task of the resistance fighter to hide his or her true identity was a daily challenge met with the risk of a swift and deadly punishment by the occupiers if caught.

However for this former tirailleur [a term associated with African, especially Senegalese, people who fought under the French flag], such a task was met with conspicuous bravery.

By staying behind to stand up to a regime that would have called him inferior due to the colour of his skin, he paid the ultimate price.

“He felt it was his duty to stay and fight, and so it is my duty to remember him, as well as Girard and Desrues [the other men named on the memorial]. All three men died that day so that our village could live on.”

So why does the battle of Cornier have such a significant meaning for the locals?

Quite simply, it was on that day that the village of Prayssas and its population almost met the same fate as Oradour-sur-Glane.

Two months earlier, this ‘martyr’ town bore witness to one of the most chilling examples of Nazi reprisals in France, when 643 men, women and children were murdered, and the entire town razed to the ground by the 2nd SS Das Reich Division.

After returning from the Russian front, this battle-hardened Nazi group had been refitting in Montauban, Tarn-et-Garonne before receiving the order to head north through France to fight off the Allied break out in Normandy, committing atrocities as it went.

Although the attack at Cornier was not perpetrated by the Das Reich Division, the German motorized infantry unit involved was responsible for defending the division’s flanks on its drive north and was responsible for numerous other reprisals against French civilians that occurred all across the south-west throughout that summer.

Documents recovered in 1945 that belonged to the motorized unit in question revealed it had indeed targeted Prayssas in August the previous year.

Without the intervention of the local maquisards of the bataillon Jasmin and their ferocious tenacity to defend their homes, the fate of the village would have been far more tragic.

With every year that rolls by, and every remembrance service attended, we move further away from these events.

Soon, we will find ourselves without any direct link and all eyewitness accounts will be gone.

To remedy this the local council has taken measures, including renaming a street in Cornier after the local maquis unit, and announcing a campaign to fund a commemorative museum.

One of the fears of modern civilisation is of history repeating itself. Without memory, such a fear could quickly become a reality and humanity once again tarnished with intolerance and hate. If current world events have taught us anything, it is that history has a funny way of reminding us about tragedy and, as we approach the 20th anniversary of 9/11, maybe we should stop and remember those who give up their lives so that others may have a better one.