The story of De Gaulle's 18 June appeal 80 years on 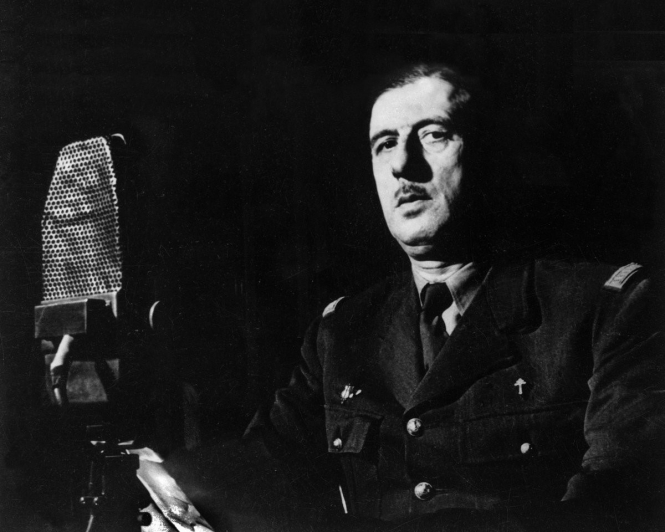 Charles de Gaulle at the microphone for one of his Radio Londres broadcasts.
By Samantha David

Eighty years ago today, the BBC broadcast one of the most famous speeches in French history. But General de Gaulle’s ‘Appeal of 18 June’ in 1940, was heard by very few people at the time and no recording of it survives today. The text, however, does survive.

De Gaulle had only recently been promoted to the rank of Brigadier General, and had been Under-Secretary of State for National Defence and War during the German invasion. When Marshall Philippe Pétain (a hero in the First World War) became Prime Minister and pledged to sign an armistice with Nazi Germany, De Gaulle faced arrest for his vocal opposition. He fled to the UK on June 17, 1940, determined to continue fighting from outside France.

Given permission from Churchill to broadcast a message, De Gaulle reminded the French that they had the support of the US and the UK, and urged expatriates to rally to him. But, out of 10,000 French citizens in Britain at that time, only 300 volunteered, and out of the 100,000 French soldiers in the country, only 7,000 joined him. The rest returned to France and swiftly became prisoners of war. Four days later, De Gaulle broadcast another speech, in much the same vein, which was heard by far more people in France, and which was responsible for rallying the French and encouraging the Resistance.

Read more: Inventors remembered in the museums of France

His most famous quote was written for a poster produced in early August 1940, which went up all over London and is referred to as L’Affiche de Londres. Versions were posted in Africa and South America as well as France during the war. It read: “France has lost a battle. But France has not lost the war” (La France a perdu une bataille. Mais la France n’a pas perdu la guerre).

The role of radio was central to the Allies’ war effort; the BBC’s Overseas Service began in November 1939 and played a vital role in boosting morale at home, confounding the Axis forces, and famously communicating in code with secret agents in occupied territories. It was all new ground as the technology was relatively recent. Although it had been used in a limited way by the military during the First World War, it had not been part of a propaganda effort.

By the start of the Second World War in 1939, the UK, Germany, the US, Japan and the USSR were all capable of broadcasting worldwide, and during the 1920s and 1930s politicians had realised the power of broadcasting to large audiences. Both Hitler and Stalin ran massive campaigns to supply all households with cheap radios (only the government’s own channels were shown on the dials). By 1939, the BBC had 103 employees working on non-domestic programming, but this rose to 1,472 in 1941 and numbers increased throughout the war.

The BBC began broadcasting to occupied Europe soon after the fall of France, and by 1940 increasing numbers of people in occupied countries as well as growing numbers in Germany and Italy, realised Axis broadcasts were untrustworthy. Listening to Allied broadcasts in occupied Europe during the war was a crime, which could incur anything from a fine to confiscation of the radio, through to hard labour or even being shipped off to a concentration camp.

After Broadcasting House, the home of BBC radio, was damaged during an air raid in 1940, the foreign broadcast division was dispatched to an unused ice rink outside the city centre. It was quickly realised that a building with a glass roof might not be the best option during bombing raids, and the BBC Overseas Service was relocated to Bush House, in Aldwych, London, where it remained for the next 70 years.

The corporation broadcast programmes worldwide. It had stations in Canada, Australia, New Zealand and the US. By the end of 1940, the BBC was broadcasting 78 news bulletins a day, in 34 languages. They employed bilingual, native-speaking refugees for the foreign language broadcasts, who could translate between the languages quickly. Most German speakers were Jewish and, at first, producers were nervous that listeners in Germany would know they were Jewish and refuse to listen, but later on many German Jews did write and broadcast programmes.

It was deemed important to make it clear that the viewpoints expressed on the radio were the official views of the government, and not of the individual newsreaders. BBC Radio Londres was run by the Free French in London from 1940 to 1944. Almost all broadcasts began with the well-known first four notes of Beethoven’s Fifth Symphony, which is also the letter V in morse code and which conveyed Churchill’s ‘V for Victory’ slogan.

The station broadcast entirely in French starting with the now-famous phrase, “Ici Londres ! Les Français parlent aux Français...” The broadcast would then continue, “Before we begin, please listen to some personal messages.” These are perhaps the most famous messages ever transmitted in code, sent by the British Special Operations Executive to their operatives in France. Some were completely nonsensical, designed only to confuse the enemy, while others had serious meanings, which were relayed by courier in advance. Then would follow a series of phrases: “Jean has a long moustache” or “There is a fire at the insurance agency” or once, “Courvoisier, we’re coming to visit you”.

The head of the famous brandy-making family, who lived in London is said to have reported to the BBC asking what they wanted. It is also said that a Madame Courvoisier contacted them to ask if it meant her sons, who were prisoners of war, were returning to France.

As well as sending messages to the Resistance, some messages were designed to give the Nazis the impression that something was afoot. Because the messages were codes in themselves rather than being encrypted using a cypher, it was impossible to understand them without a codebook, so the Nazis concentrated on jamming broadcasts, tracking down radios used to listen to them, and arresting anyone suspected to tuning in to Radio Londres.

From the beginning of 1944, the network was inundated with messages. On June 1 alone more than 200 messages were sent, making it clear to everyone that something was planned. Despite efforts to jam the messages, the first notes of Beethoven’s Fifth could be heard by listeners, and in the run-up to the D-Day Landings of June 6, 1944, Radio Londres broadcast the first stanza of Paul Verlaine’s poem, Chanson d’Automne, to let the Resistance know that the invasion was imminent.