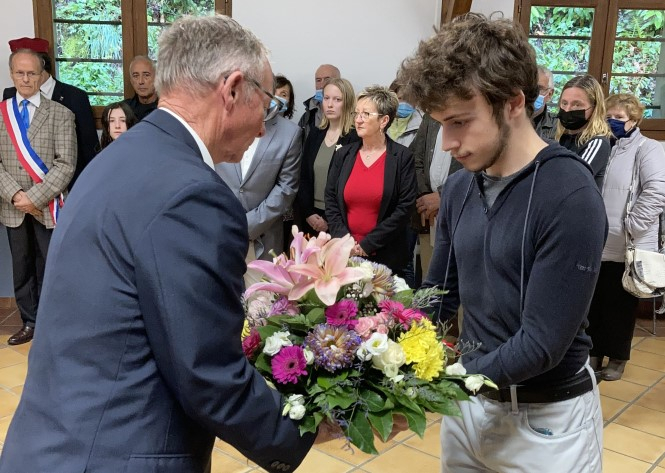 Members of the community paying their respects at the ceremony Pic: André-Jacques Portron

A ceremony has been held to honour the late wife of a British airman who miraculously escaped a plane crash that hit a French mountain village in 1943, killing all of the other seven onboard.

The British plane was transporting arms to the French Resistance.

Sergeant John Brough was the only airman on board the doomed World War Two flight to survive, and he would later escape from the Germans thanks to help from the French villagers.

Since his death in 1994, his remains have been in the military plot in the cemetery of the village, Marcols-les-Eaux, Ardèche.

His wife, Eve, who died at the end of 2019, had stated that she wanted her ashes to be scattered in the same area.

On October 30, a ceremony to honour her wishes finally took place, with villagers remembering her, her husband, and the seven who died in the crash.

Mayor Bernard Justet said: “This commemoration ceremony already happens annually, but this year the exceptional thing is the transfer of Mrs Brough’s ashes. Such were her wishes to be there. But in the context, it wasn’t possible, because the military plot is only for military people.

“But we will scatter the ashes as close as possible, so she will be able to rest in peace in Marcols-les-Eaux.”

He explained that the villagers had been very involved in the Resistance during the war, especially when it came to helping the aviator who miraculously escaped the crash that killed those he was flying with.

Villagers young and old came together to listen to traditional French music, as well as a rendition of the British national anthem. Mrs Brough’s ashes were in an urn next to a photo of her, along with French military flags and commemorative flowers.

Among those present were Margareth de Micheaux who has helped to maintain contact with family members living abroad and Sylvain Chanal, 96, the godson of Marie Giraud whose house Sergeant Brough hid at.

Robert Croze, 81, a witness of the events who was aged just three at the time, told Le Dauphiné about his memories of the event.

As the aircraft hit a big pine tree it split in two and the sections skidded down the hillside towards the village, he added.

“My parents were in a panic. We all went out, but my mother said we should go back inside because if they were Germans they would shoot us,” he said.

“Around 7:00 the next morning John Brough came to the farm. He didn’t speak a word of French. He and my father went to see the plane. My father said it was a disaster, he could see dismembered people; the pilot was still in his cockpit.

“John was a rear gunner and we think he was thrown out when the plane was cut in two. He was limping a lot. He said ‘English, English’ and my father said ‘he’s an Englishman, we’ll have to hide him.”

Sergeant Brough was hiding in a space between a wall and haystack when Germans arrived to investigate, he said.

“We were afraid on the day of the investigation. I think he ended up staying about 15 days,” Mr Croze said.

He recalled the villagers giving Sergeant Brough vitamins, and remembered watching him cutting himself slices of saucisson.