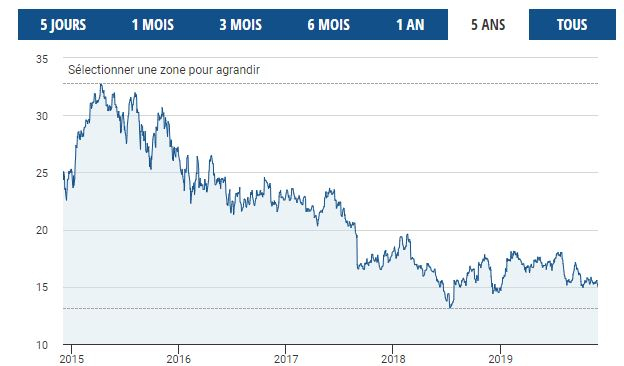 At a graph of supermarket giant Carrefour’s share price over the past five years looks like a mountain stage of the Tour de France printed backwards.

The situation looked so bad for the company, which has 12,000 stores in 30 countries, that there was talk that it might be broken up, voluntarily or forcibly. It was a big comedown for a firm that led the hypermarket sector in the 1980s and 1990s and was a source of national pride, with expansion into countries as far apart as Brazil and China.

In France, its 248 hypermarkets are familiar sights, dominating out-of-town shopping centres. They account for half of Carrefour’s sales figures here, and a quarter of global sales – but the car parks surrounding them have become less and less busy.

France’s shopping habits have changed. Instead of one large hypermarket shop a week, or a month, buyers have started going to smaller shops, closer to their homes.

During the last financial crisis, many buyers switched to “low-cost” competitors from Germany and have not returned. Others have taken to the internet and shop around the various “drive” pick-up options for the best deals.

At the head of Carrefour, there was a game of musical chairs, as shareholders tried desperately to find someone who could turn things around.

The last time the music stopped, in July 2017, Alexandre Bompard, formerly chairman of Fnac-Darty, was the one to take the top job, and he launched a four-year plan in January 2018 to alter the company’s fortunes.

Headline figures were the loss of 2,400 head office jobs and then, in March, 1,500 more from hypermarkets.

Along with the job losses came leaks of all sorts of tests to find new formats for the hypermarkets, aimed at bringing them back to their former glory.

The plan is likely to mean that the days of going into a store and facing rows and rows of goods which you put into a trolley then take to a long line of check-outs, will go.

The first trial store of a new format, opened in Dijon, is only two-thirds the size of the hypermarket it replaced.

The long line of cashier tills has almost disappeared, with most shoppers equipped with scan-as-you-go trolleys. Food takes up more than half of the new space, even though the company says it accounts for only a third of profits.

New sections with bio-food, staffed by trained employees, have been created.

Rows of washing machines and fridges have disappeared as has the jewellery section.

Carrefour says it now concentrates on areas where it makes the largest profit, while offering low prices.

Spare space is now used as a café and restaurant.

The home appliances may make a reappearance as Carrefour has announced a range of new partnerships, including one with Darty, which will see some Darty stores open within its stores.

The new format Carrefour hypermarkets might succeed in bringing customers back, especially with new restaurants and transformed bio sections, according to Frank Rosenthal, a marketing expert specialised in hyper and supermarkets.

“I have been to the second of the Carrefour Next stores, near Paris, and what was striking was the space given over to restaurants,” he said.

“There are seven different ones, within the store, all offering good quality for the price choices, with waiters and good service. It is something new for France, although common in the United States, and with the number of people going out to eat in France rising by 5% to 6% each year, as well as the culture of eating lunch out on working days with vouchers, it might make a difference.”

He said the company’s expressed wish to spend more on the most profitable parts of existing stores meant that the bio section of the new store was now “a store in a store.”

“Obviously not all clients will buy bio all the time, but it is a sector where large profits are made and they have in the new store a complete bio offer with a different ambience from the rest of the store. They have been working on supply chains for bio products, with quite a few local producers, and now they are working to boost sales.”

Similarly, the space given to profitable health and beauty sections had also been transformed.

Mr Rosenthal said Carrefour had to do something or risk getting into even more difficulty. “Not all of the hypermarkets will change overnight – they are targeting specific customers and where there are already many restaurants in an area, it will not be worth while changing,” he said.

“Similarly in areas where very few people buy bio products, they will not change. But overall, I think shoppers will come back to the new hyper markets, which are important for the group.”

Hypermarket and supermarket expert Franck Gintrand, who has written about how hypermarkets have moved other shops out of town centres, said Carrefour’s strategic problems where shown when it paid €645 million for 800 Dia supermarkets in 2014, only to sell off or shut 272 of them two years later, taking a large write off.

He said: “Carrefour has had to face the rise of local competitors and had forgotten to care about its local market,” he said.

Mr Gintrand said he expected the number of out-of town stores to continue to rise, especially in medium sized towns in rural France because of the convienience they offered to shoppers.

More professionals like doctors, lawyers and accountants will also move out of town, again because of the ease of parking and lower rents.

“Carrefour though, in my opinion will struggle to get back the hypermarket shoppers it has lost. It will also have to pay strict attention to the smaller stores like Carrefour Market, Carrefour Express and Carrefour City, which can be profitable but lack the attraction of low prices and purchasing power of the hypermarkets.”

Carrefour is not the only large French retailer to suffer. Auchan put 20 of its worst performing stores up for sale last April, and said in July that 10 of them had found buyers.

German low-cost chains Lidl and Aldi, as well as the co-operative supermarket chain Intermarché, have signed to take the stores on, with many of the 295 staff.

The rest are closing down, with most of the 377 salaried employees affected being offered generous redundancy packages.

At Casino, Monoprix and Géant, the €3billion debt owed to banks by the Rallye holding company, which has a majority stake in them, is having an effect.

Rallye filed for protection from its creditors earlier in the year to give it time to find a way to pay back the money and Casino shares were hit by repeated short selling campaigns by mainly American investment funds. Investors gambled on share prices falling, often by renting shares with a promise to buy them back.

Géant hypermarkets are being sold to E Leclerc, a co-operative supermarket chain, as part of the financial dealings.

Leclerc overtook Carrefour in 2017 as the largest supermarket and hypermarket chain in the country.

Chairman Michel-Edouard Leclerc told Les Echos newspaper that talk of the “death of the hypermarket” was the result of the overheated brains of analysts and journalists, and said the local implantation of Leclerc stores was the reason they would survive.