Court to rule on French mayor pesticide ban next week 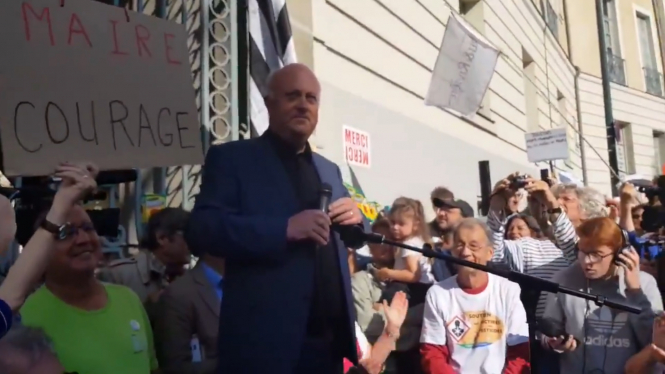 Daniel Cueff, mayor of Langouët (Ille-et-Vilaine, Brittany), was heard before the administrative court in Rennes this week (Thursday August 22), after he banned the use of pesticides and herbicides from crops in his commune that are within 150 metres of housing or business buildings.

Mr Cueff made the decision in his 602-inhabitant commune in May this year, after tests on locals’ urine reportedly revealed glyphosate levels up to 30 times higher than the recommended amount.

But the decree was questioned by authorities in Ille-et-Vilaine, who summoned him to court.

In court, Mr Cueff said: “What is the power of a mayor? Can a mayor ignore the health of his inhabitants? Since 2009, a European directive has called on France to take measures to protect its inhabitants from pesticide spray, but nothing has been done.”

He said that he “had not forbidden pesticides, but imposed a distance between fields and buildings”. He added that legally, “mayors should act in case of deficiency from the State”, and referred to public health reports that have shown a link between pesticides and human health problems.

Mr Cueff called on the court to “maintain a decision that goes in the [correct] direction of history.”

Yet, representatives for the State said that it was not the job of a mayor to make such decisions, as the authorisation on the use of phytosanitary products [such as pesticides] comes under the national jurisdiction of the minister for agriculture.

Outside the court, Mr Cueff said: “We have 300 pages of arguments [in favour]. We have taken this extremely seriously...the law does not protect citizens at all. [...] We will continue. The battle is not over. I no longer want my commune to have urine analysis in which we have found, among six-year-old children, glyphosate levels thirty times higher than the norm. It is unacceptable.”

The mayor added that 20 other mayors in France had made similar decrees.

Mr Cueff has significant support among his inhabitants and anti-pesticide campaigners, and many applauded his comments outside the court. Organisers claimed that 1,000 people were present, while local police estimated the figure at 600.

One inhabitant of Langouët, Valérie, told Le Monde newspaper: “We came by bus to support all of the mayors who are taking this kind of initiative.”

Ecology minister Elisabeth Borne commented on the case this week, saying: “The mayor is right on one point, that we must better protect inhabitants from pesticide spraying...[but] each individual cannot define their own rules in their own corner.

“We have a project that is underway, which will be the subject of debate very soon on the best ways to protect residents precisely on the subject of pesticide spraying.”

A court decision on the decree is expected early next week.