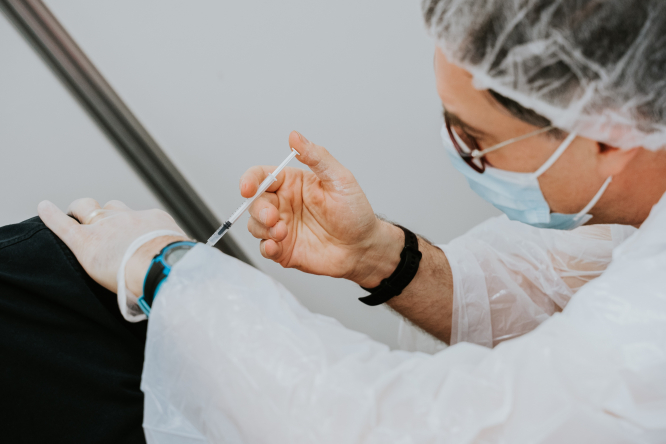 Nurses, medical students, retired doctors, dentists and vets will soon be authorised to give Covid vaccines
By Joanna York

In the 24 hours prior to the press conference 45,641 people tested positive for Covid-19 in France.

The rate of positivity, showing the amount positive tests out of all tests done in the past seven days, is 8%.

Mr Véran said: “The trend almost everywhere is that the epidemic is accelerating.”

Here are the measures he announced.

Vaccination to begin for 70-74 age group

Vaccination for everyone aged 70-74 will begin on Saturday, March 27 in France.

In this age group, people can be vaccinated in vaccination centres, by a GP or in a pharmacy.

Read more: Covid jab open to all over 70s in France from Saturday 27

A phone network is also being set up to contact people aged over 75 who have not yet received a vaccine.

Mr Véran said the phone contact system, organised by Assurance maladie, would be “systematic” and 3,000 people would be working on this.

Mr Véran confirmed that the departments of Aube, Nièvre and Rhône will join 16 other departments already operating under stricter confinement rules from March 27.

He said that after consulting with local officials, it seemed “essential to increase protection measures” in the three departments.

The number of departments under “increased monitoring” due to signs of the virus spreading has gone up to 24, with 16 joining the list.

Mr Véran said the spread of the virus was still most “worrying” in Ile-de-France, Hauts-de-France, and Provence-Alpes-Côte d’Azur, all three of which already have departments under stricter rules.

Outside gatherings limited to 6

The health minister said: “Even if being outside reduces the risk, if you meet up with 15 people, inevitably you’re going to let your guard down, take off your mask and increase the risk of being infected.”

In order to increase vaccination efforts, nurses, medical students, retired doctors, dentists and vets will soon be authorised to give Covid vaccines.

Mr Véran said: “We need everyone.”

As France has recently begun preparations to open mass vaccine centres, the health minister also said he was not against the idea of also opening drive-through vaccination centres.

More than seven million people have now received a first dose of Covid vaccine in France.

The number of intensive care beds in Ile-de-France for Covid-19 patients will be increased.

There are currently 1,400 beds occupied by patients with Covid in the region.

The number of beds available will go up to 2,250, with 80% of other hospital activity being cancelled to free up space.

Throughout France, Mr Véran said: “Pressure on hospitals, which is already high, will continue to rise for the next few days.”

There are currently 4,709 people in intensive care in France with 408 of those being admitted in the past 24 hours, figures from Santé publique France from March 25 show.

No new tighter restrictions… yet

The health minister said it was “too early” to measure the impact of the stricter rules put in place in 16 departments on March 20.

He justified the government decision to impose stricter rules rather than a full lockdown, saying that any measures had to be “acceptable” to people in France who are “worn out from fighting with no relief for the past year”.

In a surprising reference to the novel 50 Shades of Grey (Cinquante Nuances de Grey, in French), he described the stricter rules as “50 shades of measures that bear in mind the current epidemic situation and what we know about the virus” - rather than a lockdown.

He also justified the decision to keep schools open, saying that closing them would be a “last resort, as it would have serious consequences”.

If the health situation worsened, the government “would question whether [the rules] need to go further,” he added.